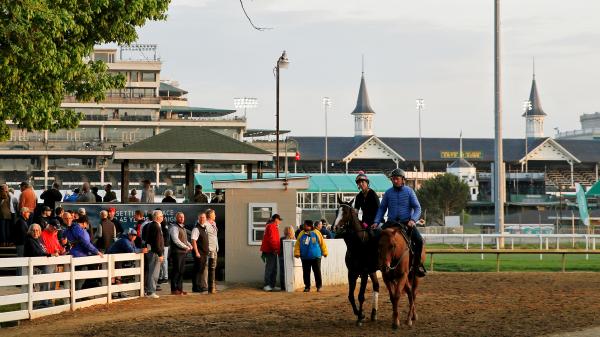 Bob Ehalt and Tom Pedulla became fast friends when they met on their first day at Fordham Preparatory School in the Bronx, N.Y., in 1970. Bob soon introduced Tom to the joys of Thoroughbred racing.

They have endured some rough moments at the track, with Tom taking exception when Bob repeatedly smacks him on the back with a program as one of their horses launches an all-out drive. Much to Tom’s chagrin and the amusement of onlookers, Bob has been known to call for security as he proceeds to cash a $27 triple.

They have owned a number of horses together and were part of the group that owned 1998 Whitney runner-up Tale of the Cat. They are often seen carrying on as if they never left their teenage years.

Here is their take on the $3 million Kentucky Derby Presented by Woodford Reserve:

PEDULLA: Bob, we both know that victories in the last round of prep races do not always translate to Derby success. We’ve done well with horses that can improve on sneaky good races. Messier jumps out at me in that regard. He did the dirty work by tackling speedster Forbidden Kingdom in the Runhappy Santa Anita Derby, creating a perfect set-up for stablemate Taiba. Messier was competing for the first time since his 15-length romp in the Robert B. Lewis Stakes, a huge performance that should not be forgotten. I have every reason to believe he is sitting on another big one.

EHALT: Thomas, I’d be fibbing, and you know I never do that, if I said I had a strong opinion about this race. There’s little separating the top contenders and I’ve gone back-and-forth the last two weeks, adding and dropping horses among my top four. Finally, I decided to base it on the odds and that brings me to Cyberknife. A few months ago, it looked trainer Brad Cox would not have a starter in the race and now he has three, and this one’s the best of the bunch. He’s getting better at the right time and should be able to handle the distance. Kinda wish Dennis Drazin at Monmouth could have brought fixed-odds to the Derby, so I’m hoping that 20-1 price holds up.

PEDULLA: It is impossible to find fault with Epicenter and I love his versatility. He was on the engine to win the Risen Star Stakes Presented by Lamarque Ford, then showed he could settle into a tracking position before he took command in the 1 3/16-mile Twinspires.com Louisiana Derby. The latter answered any questions about distance. Epicenter can be right there, but I suspect trainer Steve Asmussen drops to 0-for-24.

EHALT: As I’ve often said in this space, great minds think alike. Now I just have to find two great minds. I like Epicenter a lot but I am not sure if he can hang on at the 1 ¼-mile distance. He will be hard to catch, but I can see someone edging him at the wire. Hopefully it’s Cyberknife. As much as such a competitive field ignites thoughts of longshots, there would be no surprise on my part if the favorites are right there at the wire.

PEDULLA: Bob, I know you are plugged into the racing scene in Japan and what a run the Japanese have had, starting with their first two Breeders’ Cup victories last November. Crown Pride is as fit as can be and he is another who can keep on ticking through a mile and a quarter. I do not think he can win. I am not about to dismiss him, either.

EHALT: I’ll second that thought later. For now, I’m taking Zandon for third. He, too, was a one-time top selection and while I expect a big effort out of him, my concern is the trouble he usually has getting out the gate. If it happens here it could leave him with too much ground to make up on some top-notch foes.

PEDULLA: I cannot get out of my head visions of how erratically Charge It ran in the Curlin Florida Derby Presented by Hill ‘n’ Dale Farms at Xalapa. He brushed the starting gate and lugged in twice during the stretch run. He ran about as greenly as a 3-year-old can run, and yet his abundant talent allowed him to be second. If he straightens out his act, this  son of the great sire Tapit can be dangerous.

EHALT: In the end it came down to Messier and Crown Pride for the fourth spot, and I went with the international good thing. I know Japanese and UAE Derby Sponsored by Mubadala horses have an ugly history in the Derby but the times they are a-changing. As you mentioned, Japanese horses posted two wins at the Breeders’ Cup, and they added nine more on the undercards of the Saudi Cup and Dubai World Cup. Realistically, I look at like the way we view Todd Pletcher or Chad Brown firsters at Saratoga. You have to include them in your exotics no matter what works or breeding say. The way they have been dominating the sport, Japanese horses have earned that same level of respect – for now. Good luck to us all, folks.