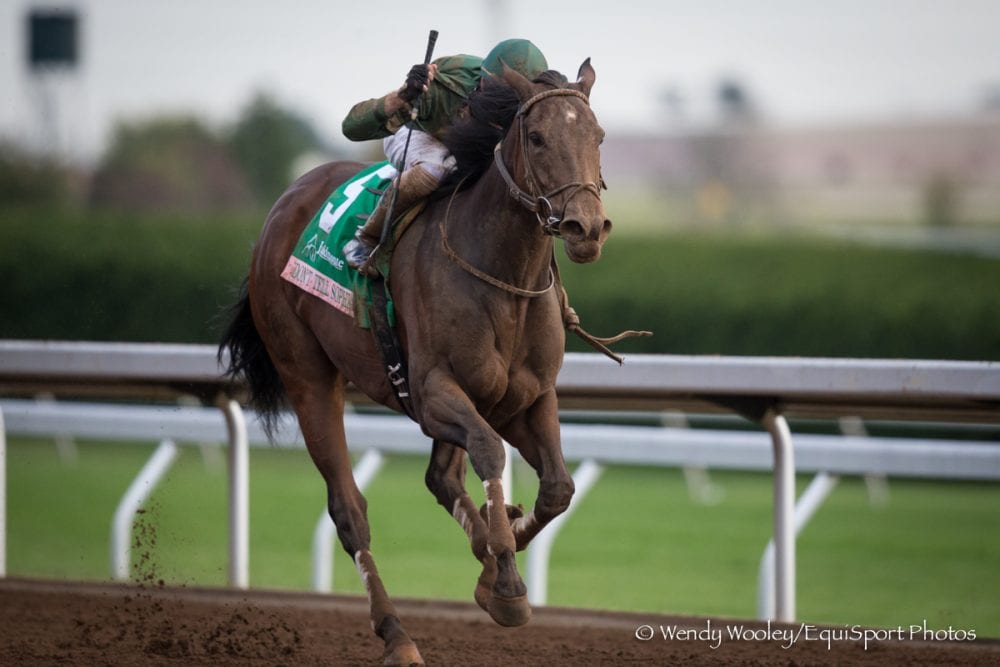 View From The Eighth Pole: The Price Of A Grade 1 Winner – Horse Racing News

So you want to go to a major yearling sale and buy a horse that your trainer can turn into a Grade 1 winner and boost its value (and your bank account) as a future stallion or broodmare prospect. How much cash should you stuff into your pockets on the way to the sale?

The question came up recently in a discussion with a veteran horse owner who has played both sides of the commercial market as buyer and seller. He watched Ireland’s Coolmore associates try to dominate the top of the yearling market going back more than 20 years and has seen that same strategy carried out more recently by partnerships formed among individual entities who pool their significant resources.

The idea is to buy enough well-pedigreed yearlings to give yourself a chance to have one or two colts win Grade 1 races and pay for the whole lot through a stallion syndication deal or stand them at your own farm and reap the benefits of stud fees. Fillies that win Grade 1 races boost their broodmare prospect value significantly. For those playing the long game, adding a Grade 1-winning filly to a broodmare band can strengthen your racing stable or commercial breeding operation.

In 2020, according to records in Bloodhorse.com’s auction database, SF Racing et al purchased 36 yearlings (all colts) for $14,540,000, an average price of $403,889 and a median of $400,000. Top price in the group was the $800,000 paid for an Into Mischief–Blind Copy colt named Coppola, who won his debut in a six-furlong maiden special weight race for 3-year-olds at Delaware Park July 13 for trainer Jonathan Thomas. Lowest price was the $100,000 paid for the Candy Ride–Proud Dame colt, Wahlberg, who currently is unraced.

Of the 36 yearlings, there are some successes, led by Grade 1 Del Mar Futurity winner Pinehurst, a $385,000 Keeneland September purchase who also won this year’s Grade 3, $1.5 million Saudi Derby. Messier, Rockefeller and Newgrange are Grade 3 winners.

Newgrange was sold recently for $325,000 at the Fasig-Tipton Kentucky Horses of Racing Age Sale, one of four of the original 36 to be sold at public auction by the SF group. Another six were claimed from their stable in maiden claiming races.

Nineteen of the 36 yearling purchases have yet to win midway through their 3-year-old seasons, with seven of those 19 yet to start. The Triple Crown and most stallion-making races for 3-year-olds are in the rear-view mirror, but there are still some opportunities for one or more of these 2020 yearlings to become the proverbial home-run horse.

From a racetrack earnings standpoint, the group has won $3,624,064 to date from the original $14,540,000 investment. Keep in mind, however, it’s stallion deals that will make or break this business model, not racetrack earnings.

Let’s go back to the original question of this nerdy pursuit: What does it take to buy a Grade 1 winner?

Here is what I learned looking at 11 years of graded stakes results in the United States and Canada.

The bargain of the decade was the Congaree filly Don’t Tell Sophia, winner of the Grade 1 Spinster Stakes at Keeneland in 2014 and second to Untapable in that year’s Breeders’ Cup Distaff. Bred by Stonerside Stable and offered by Taylor Made Sales Agency at the 2009 Keeneland September Yearling Sale, Don’t Tell Sophia was purchased by trainer Philip A. Sims for $1,000. She earned $1,382,479 on the racetrack, then was sold by consignor Spring Trace Farm to leading Japanese breeder Katsumi Yoshida for $1,200,000 in foal to Medaglia d’Oro at the 2015 Keeneland November Breeding Stock Sale.

Only someone with the wildest of imaginations could write up a business plan with a result like that.

That’s my view from the eighth pole.

Note: Below is a listing of the SF Racing et al yearling purchases in 2020. Auction data from Bloodhorse.com and Equibase.com. Racing information from Equibase.com.