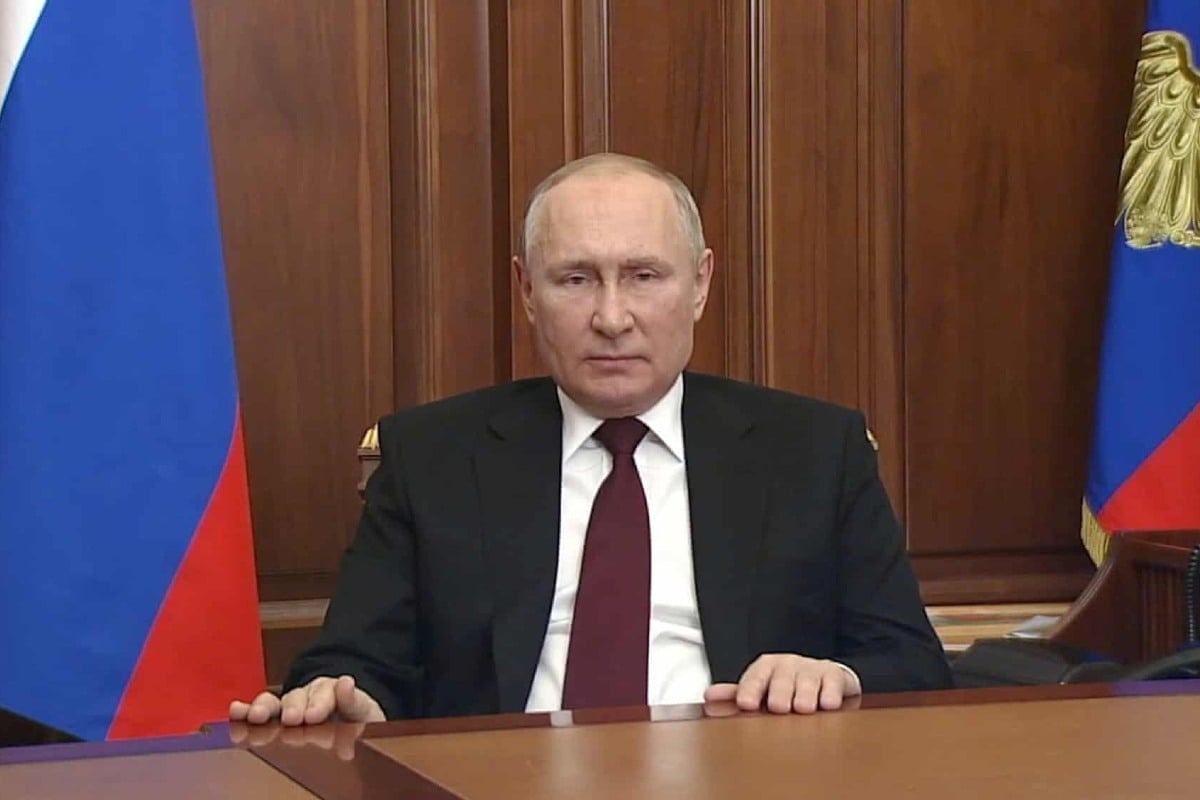 Russia President Vladimir Putin is likely to stay in power for the world’s largest country by land area through the end of the year, or so say political bettors.

Russia President Vladimir Putin delivers remarks on the conflict with Ukraine on February 23, 2022. Putin odds regarding his ability to stay in power suggest Russia will not see a change in command until at least 2023. (Image: Shutterstock)

Putin launched an invasion on neighboring Ukraine last week. The war has resulted in estimates of hundreds of Ukrainian civilian casualties. Citing “aggressive statements” from NATO, Putin yesterday ordered his nuclear weapons team to be on high alert.

Russia’s unprovoked invasion of Ukraine has been scolded by most world leaders. But bettors who believe they have an expertise on foreign affairs and are seeking to profit off of their supposed insight say Putin isn’t going anywhere anytime soon.

“Will Vladimir Putin remain president of Russia through 2022?” has “yes” shares trading at 72 cents. The PredictIt market only opened last week.

Though Putin’s shares of remaining in office have tumbled from 84 cents on February 25, his current stock shows a strong belief among political bettors that he will continue to control Russia throughout the year.

The PredictIt market has received heavy trading volume. In only three full days of trading, more than 73,300 shares have been bought and sold.

PredictIt’s betting data is used in a variety of educational capacities. The exchange operates lawfully in the US through a “No Action” relief letter granted by the Commodity Futures Trading Commission in October of 2014. No legal sportsbook in the US has been authorized to accept bets on elections or political outcomes.

Bettors aren’t alone in forecasting that Vladimir Putin will maintain control of Russia for at least the immediate future.

Putin’s immediate team largely involves officials who entered politics along with Putin, after serving in the KGB and other security agencies. Putin has surrounded himself with “siloviki,” or “people of force.”

Maria Popova, a political scientist at McGill University who studies Russian and Ukrainian politics, told The New York Times that Putin’s close circle of Russia’s most powerful men have provided the president with much security.

Where political power is more centralized in an individual ruler — as is the case in Russia under Putin — it can be somewhat harder for elites to hold that leader accountable,” Popova said.

As for the latest on the Russia-Ukraine war, talks between the two sides today reportedly made little progress. The Associated Press reports that the negotiations ended today with only an agreement in place to continue such discussions tomorrow.

Putting the world on even higher alert, the Kremlin, for a second consecutive day, threatened nuclear war. Putin also denounced the United States and its allies by saying they consist of an “empire of lies.”

President Joe Biden spent the weekend at his private residence in Delaware. The commander-in-chief is set to deliver his first State of the Union address tomorrow from the congressional House chamber.

PredictIt bettors say the address will focus on Russia and Putin. The exchange’s market asking how many times Biden will say “Russia” or “Putin” has “11 or more” the front-runner at 71 cents. Shares of “three or fewer” are trading at just three cents.

A meeting between the two superpowers is unlikely. “Will Biden meet with Putin in person by July 1?” has “No” shares the heavy favorite at 93 cents.