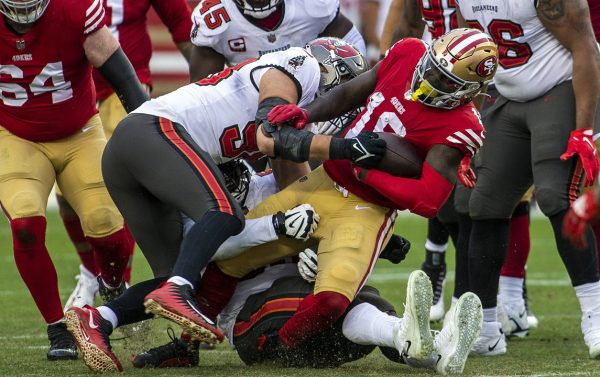 With just four weeks to go in the regular season, every injury and every other transaction that is made is magnified, especially when it involves teams looking to make a Super Bowl run.

Doctors have confirmed the initial post-game thoughts regarding the injury suffered by San Francisco 49ers’ star wide receiver Deebo Samuel. It is an MCL sprain of the knee as well as a sprained ankle, and he should return before the end of the regular season.

When exactly he does get back on the field may be related to the 49ers playoff fates at the time. If they need him to help secure the division or a playoff position, it may be sooner, If not, the team may hold him out until the playoffs. The 49ers could still track down the Vikings at the NFC’s No. 2 seed.

Good news, but according to former Niner legend Jerry Rice, it shouldn’t have happened. He criticized coach Kyle Shanahan on Instagram, saying, “Please stop running our skill players up the middle. Trey Lance, Jimmy Garoppolo and Deebo Samuel all hurt!!”

The Niners, closing in on the NFC West crown, are currently priced at +750 to win the league title, according to Super Bowl odds.

The Denver Broncos do not have such postseason aspirations, but still have games this season with the Chiefs and Chargers, Those AFC West rivals are chasing playoff spots and seedings. Quarterback Russell Wilson took a shot against the Chiefs this past Sunday. Wilson’s now in concussion protocol, and his immediate status is uncertain.

During a first-down scramble, he was taken to the ground, head hitting the turf. Wilson did appear to be knocked unconscious on the play. Later, when he was walking to the blue medical tent on the sideline, there was a visible knot on the side of his head.

He’s unlikely to play in Week 15 vs. equally-underachieving Arizona. Denver then gets the also-out-of-it Rams in Week 16. The two games that matter are Week 17 (Chiefs) and Week 18 (Chargers). Typically concussion protocol would be cleared by then, but considering the nature of the concussion, the Broncos as bottom-feeders and the investment the team has made in Wilson, he may well sit out the rest of the season.

The Dallas Cowboys, as has long been rumored, signed a veteran free agent wide receiver to help them down the stretch. It was T.Y. Hilton, the former Pro Bowler of the Colts, and not Odell Beckham Jr. Dallas isn’t officially out on Beckham, according to the team.

The Cowboys reportedly signed Hilton and not Beckham because Hilton can play right now. Beckham has been cleared, according to both he and his agent, but hasn’t taken a physical with any of the teams currently interested in him. That leaves his actual availability in doubt.

Along with the Dallas Cowboys’ new wide receiver, they’re in the market for a new right tackle. Terence Steele tore his ACL in Sunday’s game against the Houston Texans, which ended his season, putting 2023 in question as well.

Steele’s a three-year starter in Dallas, and had started every game this season.

Josh Bell was Steele’s initial replacement Sunday, but later the Cowboys had long-time left tackle Jason Peters move to the right side. Peters may stay there the remainder of the season as Dallas is set to activate left tackle Tyron Smith from injured reserve.

While Monday night’s win over the fading Arizona Cardinals keeps the New England Patriots in the AFC wild-card chase (moving them into the final spot, ahead of the Chargers and Jets), it didn’t come without cost.

They lost their top running back, Rhamondre Stevenson, to an ankle injury after just five touches. The team was already missing Damien Harris. Wide receiver DeVante Parker also went out with a concussion, and they were already without Jakobi Meyers.

This Sunday, the Patriots stay out west to play the Las Vegas Raiders. Stevenson is remaining hopeful of playing.