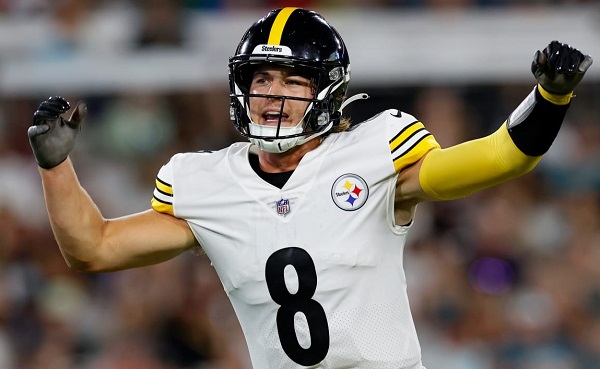 With a shortened three-week preseason in the NFL, Week 2 is when most of the starters see the field, and when most of the players who are going to make impacts in the regular season secure their spots on the roster.

It’s also a look at where things stand and what we can expect to see when the season begins.

A month ago, we weren’t sure how much of rookie quarterback Kenny Pickett there was going to be this season. The Pittsburgh Steelers sounded like they were content to let him sit and learn, starting Mitch Trubisky in place of the retired Ben Roethlisberger.

Pickett is spoiling that plan by easily playing the best of any of the Pittsburgh quarterbacks. It’s not just that he’s led scoring drives in each of his preseason appearances. He has looked good in the process. He is playing with the poise of an experienced NFL quarterback, and it’s becoming more and more likely that he will be the starting quarterback when the season begins.

The betting public sure thinks he’s going to start. Right now, he is the favorite to win the Offensive Rookie of the Year Award, paying +600. His team is priced at +850, longest on the board to win the AFC North, as per NFL odds.

Malik Willis Not Giving Up on Playing

Another rookie quarterback who was expected to spend the season on the bench is Malik Willis of the Tennessee Titans. He’s not a threat to unseat Ryan Tannehill, but the way he is playing will add heat to Tannehill’s seat if he’s a struggling incumbent

Willis is proving to be an exciting and athletic quarterback with a future, and each passing preseason game has that future looking closer and closer. Week 2 against the Bucs, he completed seven passes for 80 yards, including a touchdown, running for another 42 yards.

He is raw, but he is talented, and right now he is paying +1200 to win the Offensive Rookie of the Year Award.

If you are a USFL fan, then you already know that KaVontae Turpin was that league’s MVP this past season. If you watched the Dallas Cowboys-Los Angeles Chargers preseason game last week, you now know that he has the potential to also star in the NFL.

The Cowboys have big-play threats in CeeDee Lamb, Tony Pollard and rookie wide receiver Jalen Tolbert. As the NFL odds favorite to win the NFC East at +135, adding another weapon in Turpin almost seems unfair.

The fifth overall pick out of Oregon is indeed very good for the New York Giants. He’s also “good,” according to him, that after leaving the second preseason game with an injured knee.

Both the hit and the injury looked, at first, dirty and ugly, too. However, the cut block from Cincinnati Bengals’ tight end Thaddeus Moss is done multiple times in games, and Thibodeaux came out of the play without a serious issue.

The second betting favorite for Defensive Rookie of the Year (+400) was removed from the game, but afterward as he was walking out of the facility he said, “I’m good, We’re good. Good news.”

That’s indeed good news for one of the exciting rookies this season. Good for Thibodeaux, good for the Giants and good for all football fans who are looking forward to watching his development.

Geno Smith was not great in the Seattle Seahawks’ second preseason game, and Drew Lock was unable to play because of a positive COVID-19 test. That has head coach Pete Carroll in no hurry.

“I’m going to take the time it takes to figure it out and make sure we have all the information we need.”

That’s coachspeak for “I’m still waiting for someone to go out and actually win the job.”

Lock didn’t play at all in Week 2. Expect him to take a big bulk of the snaps in the team’s final preseason game against the Cowboys.

2022-08-23
Previous Post: American Sports Betting Battles in Big States
Next Post: How to Avoid Landmines when Playing Against Calling Stations