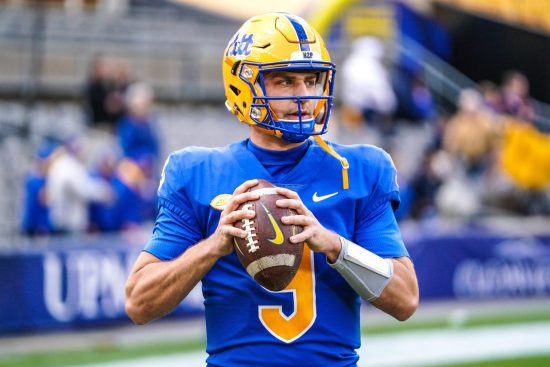 The Backyard Brawl is back. For all the West Virginia and Pitt fans old enough to remember, this is a series that dates back over 100 years. Only a short stretch of Interstate 79 separates these two old rivals. The two teams haven’t played each other since 2011.

This time around, Pitt is favored by 7.5 at sbaodds.com and will play at home at Heinz Field in front of a national TV audience. The Panthers won the ACC last season, but lost QB Kenny Pickett to the first-round of the NFL draft. Replacing him will be former USC quarterback Kedon Slovis. He will have Pitt’s top three running backs returning, but will need to replace Biletnikoff Award-winning receiver Jordan Addison.

New offensive coordinator Frank Cignetti Jr. loves to run the football and Slovis, who had over 7,500 yards passing and 58 touchdowns at USC, is more than capable in the passing game

While the Panthers offense got most of the attention last season, many forget the defense led the ACC in rushing defense and finished ranked No. 6 in the nation.

The Panthers will face a new West Virginia quarterback who was a former teammate of Slovis, J.T. Daniels. West Virginia has actually become one of the better defensive teams in the Big 12. That may be a problem this season as they lose all of their starting linebackers and have just one defensive back with any starting experience. Daniels started at USC before Slovis then got hurt. With Slovis taking over the Trojans’ job, Daniels transferred to Georgia where he once again became the starter and suffered an injury. With Stetson Bennett firmly entrenched as the Bulldogs quarterback, Daniels will try again.

He will try to take over an offense that managed 25.2 points per game last season. The big problem was running the football. The Mountaineers ranked 103rd in the nation in rushing offense averaging 123.4 yards per game. Going up against the Panthers stout run defense will be a challenge.

WVU finished last season 6-7 SU and ATS. The Mountaineers are 2-8 SU in their last ten games on the road. They are 1-4 ATS in their last five games overall, but they won five of the last seven games in this Backyard Brawl before it ended in 2011.

Pitt had its best season since 1981 last year and head coach Pat Narduzzi wants more. He’s got 14 starters returning and is eyeing another ACC title and a possible College Football Playoff berth. Three starters in the secondary are back and should be able to keep Daniels and the West Virginia passing game in check.

Pitt is 11-4 ATS in its last 15 games and 9-4 ATS in their last 13 non-conference games. Playing at home in front of the home crowd and on national television, Narduzzi and company rekindle the Backyard Brawl with a big win and cover.

Bet this pick now at an A+ rated sportsbook