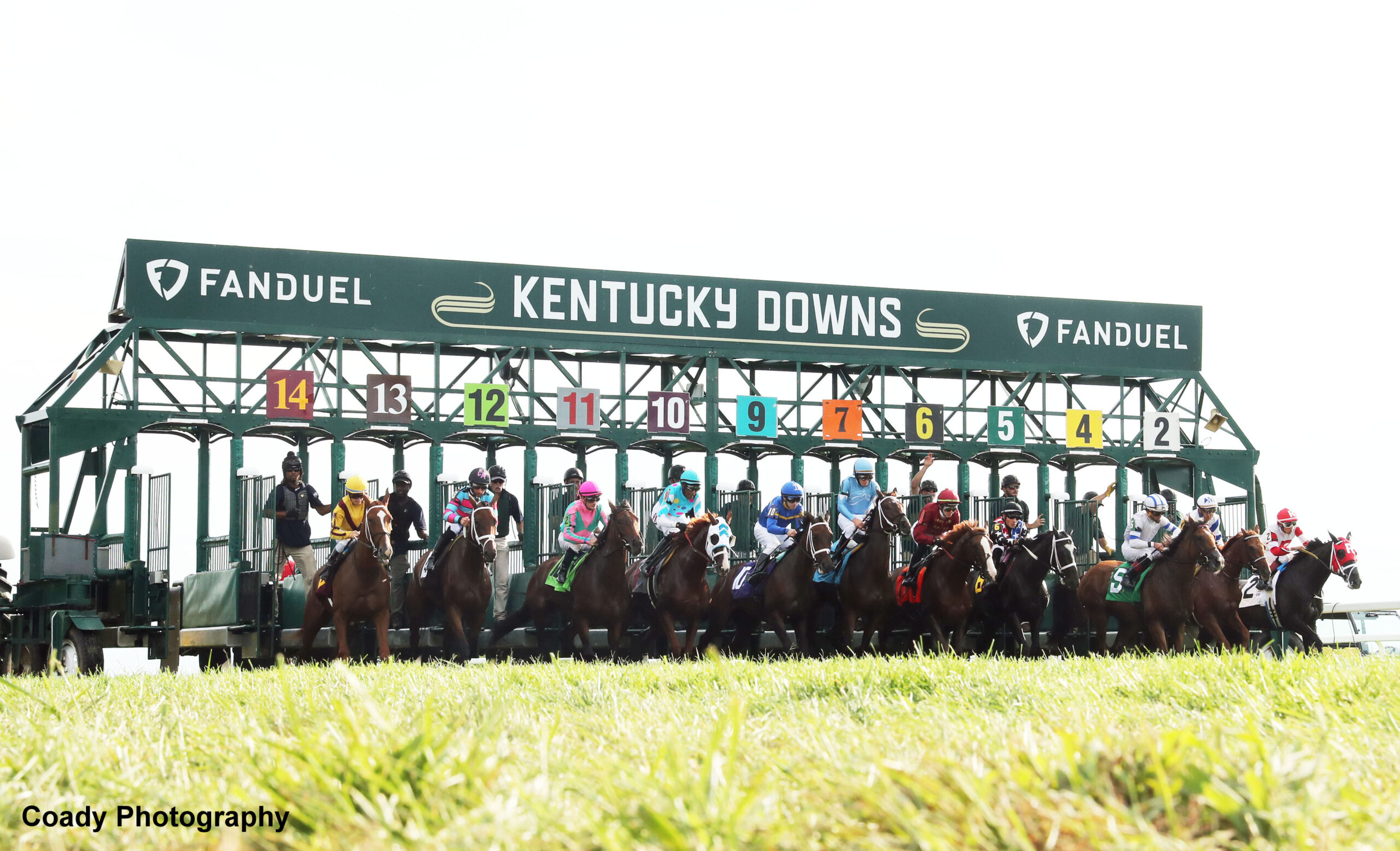 The impact of Kentucky Downs since the introduction of pari-mutuel wagering on Historical Horse Racing in 2011 can be measured through purses. Total purses have increased from $769,810 for 30 races 11 years ago to $17,863,177 for 73 races this year, including purse supplements for registered Kentucky-breds from the Kentucky Thoroughbred Development Fund. Kentucky Downs did not have any KTDF money in 2011. This year more than $6.7 million was paid out from the fund during the seven days.

“It started off like you didn’t know what to expect here, and now people can’t get here fast enough to run,” said Woodford County-based trainer Robert Medina, whose first victory at the track came with the Bill Parcells-owned Kentucky-bred Play Action Pass in Wednesday’s inaugural $400,000 Pepsi Gun Runner Stakes. “It’s an amazing thing they have done. I know it’s money motivated, but it’s fun. It’s kind of laid back and you have a great time. We need more of that in horse racing.”

The record wagering comes in spite of adverse weather on both weekends during the meet that began Thursday, Sept. 1. The last four races on Saturday, Sept. 3, had to be rescheduled. Both Sundays were significantly impacted, with the entire Sept. 4 card transferred to Monday, Sept. 5, and the last nine of 11 races carded for Sept. 11 moved to Tuesday, Sept. 13.

“It was a fantastic meet, with world-class racing despite the challenges,” said Ted Nicholson, Kentucky Downs’ vice president for racing. “Every weekend we ran, we were meteorologists. Losing both Sundays and having to shift one card to a Tuesday is not ideal. It was a testament to track superintendent Butch Lehr and the track crew how well the course held together. For us, along with our horsemen and horseplayers, to persevere and get to $80 million is huge.”

“There certainly is a sense of what might have been if we’d gotten anything close to the perfect weather we had for our weekday cards and our dark days,” said Ron Winchell, the co-managing partner with Marc Falcone in Kentucky Downs and The Mint Gaming Hall properties. “Only a couple of years ago we’d have been over the moon with these numbers. We still are. But we’ve continually set the bar higher. And through it all, we still had very full fields overall and saw spectacular racing.”

Horseplayers, sports enthusiasts and those just looking for a slice of Americana turned out to watch the racing over the undulating, kidney-shaped 1 5/16-mile turf course.

“We look forward to this every year,” said Jim Robbins, who was in the Finish Line Pavilion on closing day with a group of friends from New Albany, Ind. “You never have so many 12-horse fields anywhere else. We come down here and we fire at ’em. It’s wonderful. We go down to the paddock. We take selfies with the jockeys. The trainers are nice to us. It’s just a casual, fun atmosphere.”

Trainer Mike Maker, already the track’s all-time win leader and money-earner, won a record 12 races and $2,341,636 in purses. That was highlighted by his stakes victories with the New York-bred Somelikeithotbrown in the Grade 3 WinStar Mint Million and Red Knight in the Grade 2 Kentucky Turf Cup.

“Look at what they have done down there,” the New York-based Englehart said about the purses. “It just keeps getting better and better. It’s like winning a race at Saratoga.”

Thrilling finishes proved the norm. Among the nose finishes: the 8-year-old Red Knight in the 1 1/2-mile Kentucky Turf Cup, Campanelle – a star in both America and Europe – in the $1 million Mint Ladies Sprint (G3), Danse Macabre in the $500,000 Ainsworth Untapable and Alms in the $400,000 One Dreamer.

At age 55, jockey E.T. Baird — who since the shuttering of Arlington Park in suburban Chicago has been a man without a home track — won his first race at Kentucky Downs as Kentucky-bred One Timer took the $600,000 Franklin-Simpson (G2).

Chris Emigh, 51 years old and the third-winningest jockey all-time at Arlington, also won his first Kentucky Downs race as Bad Beat Brian prevailed for his wife, trainer Brittany Vanden Berg, in an $180,000 allowance race with an optional claiming price of $80,000.

The King of the Turf Handicapping Challenge continued to stamp itself as one of the most popular handicapping competitions in the country. In its third year, the event had a total of 640 entries, including 126 entries participating in all three stand-alone, live-money contests. Tom Rapps of suburban Cleveland prevailed with a cumulative bankroll of $5,760.30 to earn the coveted title of National Turf Handicapper of the Year and the Global Tote King of the Turf Championship Belt.

“The third year of the King of the Turf Handicapping Challenge proved to be the most popular yet,” said tournament director Brian Skirka. “The prize structure of our three contests matches the high quality of racing put on by Kentucky Downs. Congrats to Tom Rapps, a very deserving King of the Turf. Thanks to all the players who supported these contests and adapted to some curveballs from mother nature. It was a record-breaking year for these contests and I look forward to setting some new records in 2023.”

Average number of starters per race since 2011