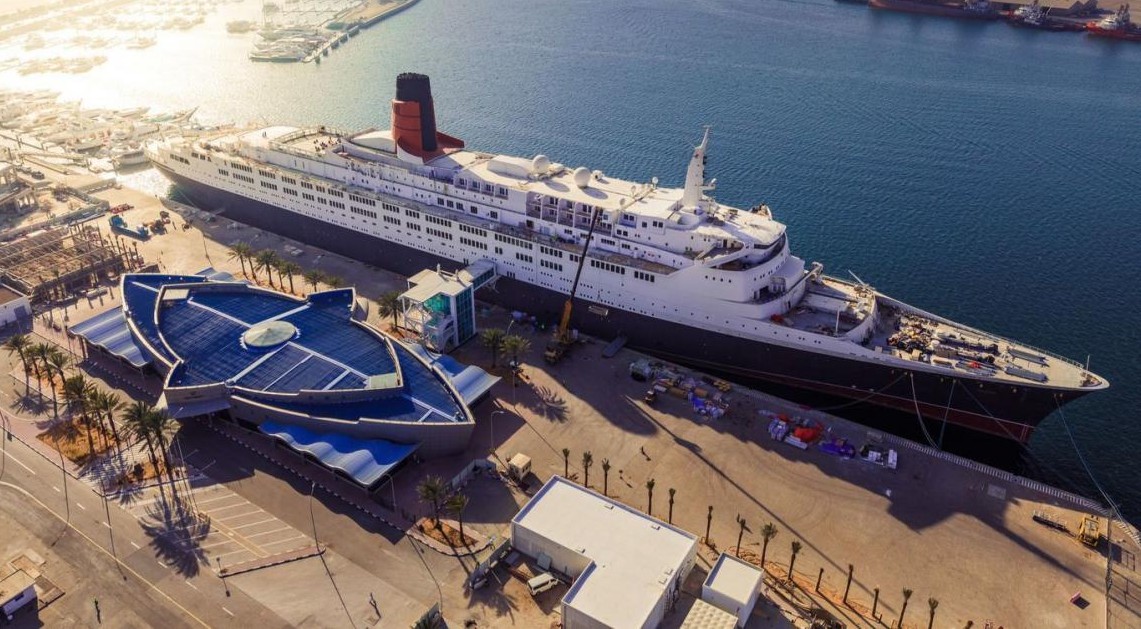 What Happened to the QE2 and its Casino?

Here’s a story about Queen Elizabeth II you haven’t read yet. The cruise ship christened by Britain’s former monarch in 1967 is now a floating luxury hotel moored off Dubai. The QE2, as it became known, was retired to the United Arab Emirates city after completing its final ocean voyage in 2008. And, if you’re ever in the neighborhood, the slot machines in its former casino are proudly on display — though they’re all decommissioned and unplugged, since gambling is illegal in Dubai. Decommissioned and unplugged slot machines are on display in the former casino of the QE2 cruise ship, which is now a permanently docked hotel in Dubai. (Image: voanews.com)

The 70,327-ton QE2 entered service in 1969 and soon became the world’s most famous luxury liner. Its 800 Atlantic Ocean crossings hosted a conga line of celebrities including Nelson Mandela, Elizabeth Taylor, Elton John and Buzz Aldrin. Several members of the Royal Family also used the ship to cross from either New York or Southampton, England, though never the queen herself.

By the time she was retired with a massive party in 2008, the QE2 was the longest-serving ship in Cunard’s history, having traveled 5.5 million nautical miles and carried 2.5 million passengers over its 38 years.

Cunard sold the QE2 in 2007 to Dubai’s state-owned Istithmar World for $100M. However, the Great Recession, followed by years of recovery, left the ship languishing in the emirate’s Port Rashid for nearly a decade. During this time, plans reportedly floated for the historic vessel included gutting it, selling it, moving it to South Africa to serve as a floating hotel for the 2010 World Cup, and converting it to a floating casino in Macau. Ultimately, it was decided to make it a 300-room hotel, restored to look exactly as it did during its maiden voyage in 1969.

Except for one little detail…

The Casino is Not Original

When the QE2 entered service in 1969, it did not feature a casino. According to the website theQE2story.com, Cunard originally intended to build one, in the space that became the ship’s conference center. However, the idea was quashed by the company’s attorneys, who worried that a casino might need to be dismantled every single time the ship docked in the US. (At the time, gambling was illegal in US waters.)

Since arriving in 2008, the QE2 has been docked, now permanently, in Port Rashid in Dubai. (Image: luxurylaunches.com)

By the early ‘70s, however, those regulations were relaxed and Cunard installed a temporary gaming floor in its disco, the 736 Club (named after the ship’s hull number). The casino was dubbed the 736 Sportsman Club, as it was operated by the Sportsman Club of London.

According to theQE2story.com, the permanent casino that still exists today was installed as part of a 1972 redesign. Since the 736 Club and 736 Sportsman Club were slated to become the Queen’s Grill, an upper deck library was demolished to create the new space. Renamed the Players Club, the casino featured table games including roulette and blackjack and roulette, in addition to its own bar. (Original casino chips can still sometimes be found on eBay.) A 1990 renovation by designer Graham Fahye, inspired by his love for the Queen Mary liner, expanded the casino into an adjacent photo display area. More gaming tables were added, while the main room and walkway were left to the slots. The bar was replaced with a cashier’s station.

Was the QE2 Even Named after QEII?

According to Cunard literature, the Queen Elizabeth 2 was the second ship the company named after the wife of King George VI, not after the reigning British monarch at the time — hence, the number rather than the Roman numeral. (The ship’s bow and stern have always read “Queen Elizabeth 2.”) The other Queen Elizabeth cruise ship was still in service at the time of the QE2’s launch.

However, the 1969 book Queen Elizabeth 2: The Authorised Story quotes a former Cunard chairman, Sir Basil Smallpeice, as having said: “The Queen Mary [named] after her Grandmother, the Queen Elizabeth after her mother, and now this magnificent ship after herself.”

Strangely, by the manner in which the queen christened the ship on Sept. 20, 1967, she actually may have just ended up naming it after herself. The words she used were: “I name this ship Queen Elizabeth the Second.” This was the proper form for  others to address her. According to the aforementioned authorized history, an envelope containing a card had been handed to the queen at the christening, but the card read only “Queen Elizabeth.” Her Majesty added “the Second.”

Queen Elizabeth II, the longest-reigning monarch in British history, passed away peacefully on Thursday, Sept. 8, 2022 at age 96. Her son has since ascended to the throne as King Charles.

The post What Happened to the QE2 and its Casino? appeared first on Casino.org.