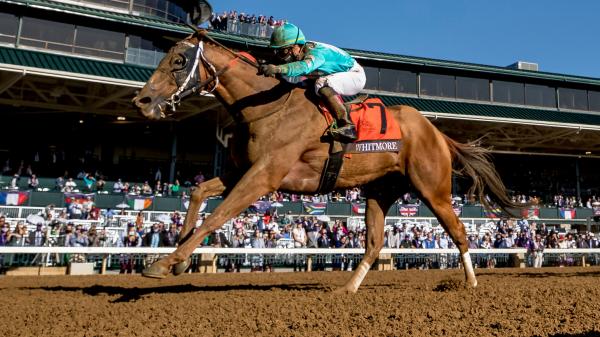 The Qatar Racing Breeders’ Cup Sprint is arguably the most prestigious dirt sprint race in the world. It carries a purse of $2 million and has propelled the last seven winners and 10 of the last 11 winners to year-end champion honors as the Eclipse Award winner in the male sprinter division.

Dirt sprints are the bread and butter of U.S. racing from coast to coast, so it’s no surprise that horses bred and based in North America have dominated this three-quarter-mile race to the tune of 37 wins in 38 editions. Only Sheikh Albadou, who was bred in Great Britain and campaigned in Europe, in 1991 was able to ship into the U.S. and win our premier dirt sprint.

Every year, I look through the last 20 editions of this race for historical trends and interesting nuggets that might be helpful when handicapping the Sprint. I then try to build a profile of the winner to compare with this year’s contenders.

The results for the first three years were very strong, but last year Whitmore bucked many of the trends when he rallied for an upset at big odds, so let’s start there with some information on how favorites and longshots have fared in the Breeders’ Cup Sprint, which will be held Nov. 6 at Del Mar.

Any Shot for a Big Payday?

In 38 editions of the Breeders’ Cup Sprint the average payout for a $2 win ticket on the victor has been $20.01. Historically, eight of the 14 other races produce better payouts on average, so it’s not the best spot to go searching for a longshot. But upsets do happen in the Sprint and it has been very tough to win as the favorite from 2001 to 2020.

Looking at the last 20 editions of this race, the one aspect that seems most significant is that the winners of the Breeders’ Cup Sprint have been exceptionally consistent.

What’s the Best Running Style for the Sprint?

Tactical speed is extremely valuable in all dirt races and particularly dirt sprints, so it is no surprise that high-cruising speed has been a common trait among the last 20 winners. Horses who prefer to rally from well off the pace have enjoyed far less success.

Who Are the Leading Candidates for the 2021 Sprint?

This year, it looks like two of the three probable favorites will come from the 3-year-old division: Jackie’s Warrior and Dr. Schivel. Three-year-olds have won six of the last 20 editions of the Breeders’ Cup Sprint, so that’s an obvious place to start.

I expect Jackie’s Warrior to be a fairly heavy favorite having won three straight graded stakes following a runner-up finish by a neck June 5 at Belmont Park in the Grade 1 Woody Stephens Stakes Presented by Nassau County Development Agency. He’s a Grade 1 winner in absolute peak form who has won from on the pace and just off the pace, so he really couldn’t fit the profile of a Breeders’ Cup Sprint winner any better. Of course, the talent in the race will be significantly tougher than the weak four-horse field he faced when winning the Grade 2 Gallant Bob Stakes Sept. 25 at Parx Racing and favorites have only won at a 20% clip over the last 20 years. Jackie’s Warrior will be tough, but I don’t view him as a lock by any stretch.

In fact, I think I might lean toward Dr. Schivel, who also is in great form with three wins in as many starts since June and figures to carry much more appealing odds. The 3-year-old Violence colt won the Grade 1 Bing Crosby Stakes at this track and distance in July when rallying from sixth and led from start to finish most recently in winning the Grade 2 Santa Anita Sprint Championship Stakes. He’s won five straight races and is 3-for-3 lifetime at Del Mar, plus he’s versatile enough to set the pace, press the pace, or stalk the pace.

Another 3-year-old who could outrun his odds in the Sprint is Following Sea. He’s got a win, one second, and one third in three starts since June, which includes a second via disqualification in the Grade 1, 1 1/8-mile TVG.com Haskell Stakes. He reminds me a little bit of 2003 Sprint winner Cajun Beat, who has tried longer distances and then showed improvement when cutting back in distance and really came on in the second half of the year. Following Sea returned to sprinting for the Grade 1 H. Allen Jerkens Memorial Stakes in August at Saratoga and was a well-beaten third behind Jackie’s Warrior and Life Is Good, but he took a significant step forward in the Grade 2 Vosburgh Stakes when he led from start to finish in a 4 ¾-length runaway. I think he’s better prepared in this rematch with Jackie’s Warrior and the price will be right.

Stoll Keenon Ogden Phoenix Stakes winner Special Reserve very likely will vie with Dr. Schivel for the second betting choice behind Jackie’s Warrior and for good reason. He won five of seven starts on the year with a pair of seconds. The 5-year-old Midshipman gelding has two stakes wins and a runner-up finish by a half-length in the Grade 1 Alfred G. Vanderbilt Handicap in three starts since July. He also boasts tactical speed as a sprinter who does his best work pressing the pace. He’s really good right now – his last four races are the fastest of his career.

Another upset contender to consider based on historical indicators is Aloha West, who most recently was second by a next to Special Reserve in the Phoenix Stakes. While he does usually prefer to come from off the pace, he’s also won using a stalking trip and he could benefit from what figures to be a swift pace. He’s posted two wins and a second in his last three races, but he’s also never won a stakes race so I’m leaning toward using him to spice up my exacta and trifecta tickets rather than on top as a win contender.