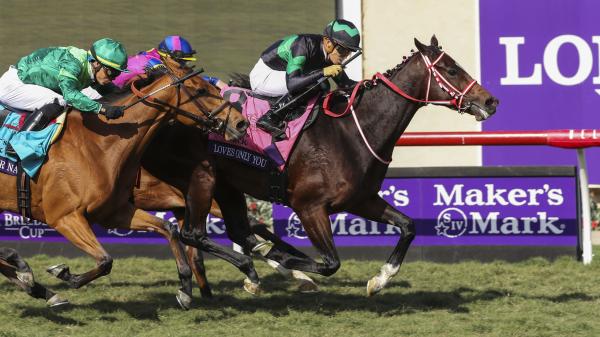 What to Expect When the World Comes to Breeders’ Cup

The quarantine barn is ready to receive them. Once again, international runners the world over will come to a rotating horse racing venue for the Breeders’ Cup World Championships. They are ready to do battle at Keeneland Race Course! After a plane ride, they ship into the host track representing a cross-section from different countries of origin. When the crack veterinarian staff has cleared them, they will head to the racetrack for exercise, as their trainers make some final adjustments before their races on Friday or Saturday.

The Breeders’ Cup mission, proposed in 1982 and inaugurated two years later at Hollywood Park, was to create an end-of-the-year international racing festival that would bring together the world’s best. Initially only a day, it was later expanded into a Friday and Saturday event. Since 2008, the Breeders’ Cup has diversified its program, and eventually that led to a series of “Win and You’re In” races around the globe that would take place throughout the year.

Joining the United States and Canada, sprinters and routers emerge from Europe, Japan, South Africa, and South America seeking to gain automatic access to the Breeders’ Cup World Championships. Here is a rundown of the regions that produce the best of the best …

If you have never watched a Japanese horse race, then you have missed something. Full of precision from the time that runners prance into the paddock, the home country is absolutely ecstatic when it comes to Thoroughbreds. Packed grandstands are the norm and, with a long history of all-things equine, they have steadily built a powerful breeding program.

The modern foundation sire for it was Sunday Silence, who won the first two legs of the Triple Crown in 1989. Since his death in 2002, his stud career set in motion the crowning of a series of well-bred champions that have come to dominate the sport on the archipelago. The Yoshida Family continues to buy European and American broodmares, which bodes well for future generations.

Steadily, at international events like the Breeders’ Cup, and also the Saudi Cup and Dubai World Cup cards, the Japanese are making their presence felt more and more. This is the direct result of a powerful stakes schedule across the country that includes a number of important tracks, namely the Tokyo Racecourse, which is the site for “Win and You’re In” races like the Group 1 Victoria Mile. With the annual November running of the Japan Cup, and with the well-oiled machine of the Japan Racing Association (JRA), they are major international players that are here to stay.

Proof of Japan’s continued rise was on display at the Del Mar Thoroughbred Club in 2021, when they won the Maker’s Mark Filly & Mare Turf with Loves Only You, a 5-year-old daughter of Deep Impact (by the aforementioned Sunday Silence), and the Longines Distaff with Marche Lorraine, a 5-year-old daughter of Orfevre (another descendant of Sunday Silence). The Japanese proved they could handle both dirt and turf, and stiff global competition. Their rise only continues, as they attempt to rival Hong Kong racing within the region.

Sweeping across the Southern Hemisphere, you will find a number of important countries that support Thoroughbred racing, offering important races that are held on both dirt and turf. One of the major challenges are the seasons, which are the opposite of those to the north. This impacts foal crops that operate later in the year. As a concession, when they come to the Breeders’ Cup, Southern Hemisphere 3-year-olds receive a weight break and do not have to carry as much. Still, despite this seemingly seasonal disadvantage, their influence is strong, and over the years the Breeders’ Cup has extended many of these nations “Win and You’re In” races.

For instance, in South America you will find countries like Brazil, Peru, Chile, and of course, Argentina, that card what are considered Group 1 races, essentially Grade 1 races when outside of North America. Breeding operations have a significant role in this part of the world, and will continue to do so. They have not quite translated that bloodline success when applied to Breeders’ Cup victories, but it is only a matter of time.

Across the Atlantic, South Africa is making its presence known on the global stage, as they have a number of important tracks that run with regularity across the southern tip of Africa. Early in the year, operations shuttle horses to the Middle East to compete at Meydan in Dubai. Runners ply their trade on both dirt and turf, with the L’Ormarins Queen’s Plate at Kenilworth Racecourse serving as a highlight of that track’s racing festival as well as a “Win and You’re In” race for Breeders’ Cup.

As for Australia, even though they have a very strong Thoroughbred racing heritage, they have not had a major impact on the Breeders’ Cup. Without “Win and You’re In” races on their schedule, it comes down to timing down under. After all, the signature event of their summer, the Melbourne Cup — known as “the race that stops the nation” — occurs on the first Tuesday of November, right in the middle the Breeders’ Cup. Australian-breds have certainly participated in North America’s big weekend, but we will very likely not see mass participation anytime soon.

Since the Breeders’ Cup came into existence, the role played by European runners, especially on the turf, has been nothing short of spectacular. With a history that was born on the grass hundreds of years ago, it is safe to say, that countries like England, Ireland, France, and Germany have been doing this a long time.

The breeding programs are geared to produce entries that can handle any distance, although dirt is not a regular staple when it comes to surfaces. England has Ascot (with the Royal Meeting in June), Newmarket, York, and Sussex, while Ireland hosts meetings at The Curragh and Leopardstown with “Win and You’re In’ tickets that are up for grabs. On the continent, France becomes a focal point in early October at Longchamp in Paris with the running of the Group 1 Qatar Prix de l’Arc de Triomphe, along with a strong undercard of important races.

Whoever wins France’s greatest test is automatically considered one of the favorites to take the Grade 1 Breeders’ Cup Turf, a race that is run at 1½ miles. However, only the great filly Enable in 2018 at Churchill Downs has captured both races in the same year. European runners have also claimed many of the turf division races at the Breeders’ Cup over the years. Piloted by European-based jockeys, who are regularly some of the greatest riders in the world, they have experience handling their own mounts.

The turf plays right into European strengths because American horses do not regularly excel at longer distances like their counterparts do across the pond. This kind of racing is different because it places much more of an emphasis on “settling” down early, then “asking” for a burst of speed as the stretch begins to unfold. Also, European grass courses are normally softer than firm American ones, so depending on what they find at the Breeders’ Cup, it could be an advantage if the conditions have more surface “give.”

Once again, the Breeders’ Cup and its World Championships will welcome the latest round of these international stars. Be ready North America, they are coming!