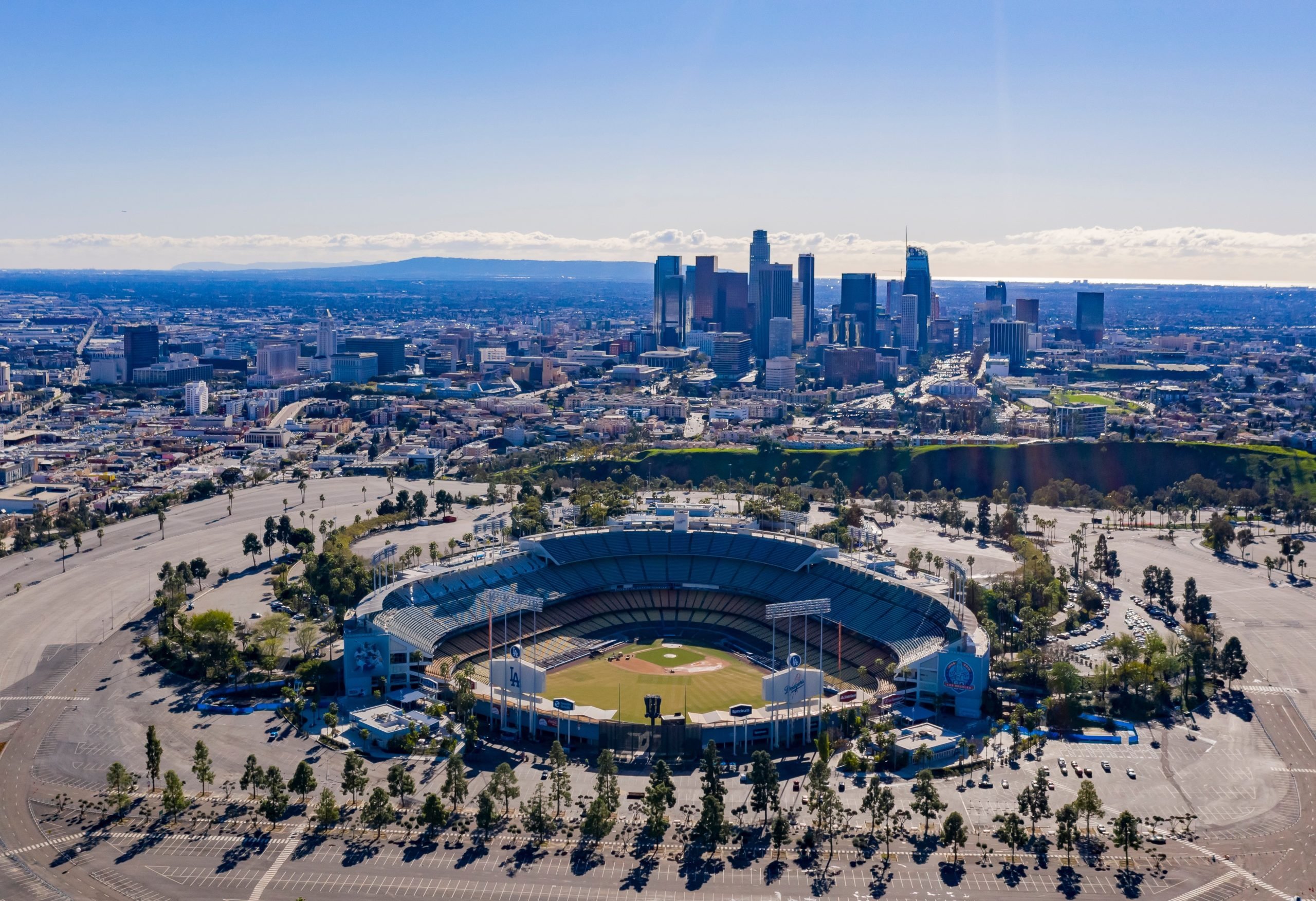 California’s Secretary of State announced Friday the proposition numbers for measures voters will decide in November’s general election. Two of those initiatives are proposed constitutional amendments to legalize sports betting, and those items were numbered back-to-back.

Aerial view of the Los Angeles downtown area with Dodger Stadium in the foreground. Two measures will be on the California ballot in November that would legalize sports betting in some fashion in the state. With more than $180 million already raised by groups for or against the measures, it’s likely to set a record for the most expensive political campaign for a state initiative. (Image: Kit Leong/Adobe Stock)

The online betting proposal cleared earlier this week, just ahead of the deadline to get on the ballot for the Nov. 8 election.

Kathy Fairbanks, a spokesperson for the tribal-backed “Coalition for Safe, Responsible Gaming,” said it likely will make it easier for voters to have both measures beside each other on the ballot.

What will be confusing for voters will be remembering which one is in person and which one is online, but both campaigns will make that clear in our education efforts,” Fairbanks, told Casino.org. “And it will be clearer still when voters read the ballot pamphlet and their actual ballot which includes a description.”

The pamphlet will also be available online at the Secretary of State’s website ahead of the election.

Here’s a quick reset on what both measures include.

Prop 26 would allow retail sportsbooks for in-person wagering at California’s tribal casinos and the state’s four thoroughbred racetracks. Sportsbooks at racetracks would have their revenues taxed at 10%. The measure also would allow tribal casinos to offer roulette and dice-based table games. There’s also a provision within the amendment that would allow anyone to file a civil lawsuit against an entity allegedly conducting illegal gaming activity if the state’s attorney general does not take action.

Prop 27 would allow sports betting statewide through online sportsbooks and mobile apps. Sportsbook revenues would be taxed at 10%, with 85% of the funding going to fund homelessness and mental health services. The remainder would go toward economic development for non-gaming tribes. Commercial sportsbooks must meet certain criteria in order to qualify for licenses that cost $100 million each. Gaming tribes can also take part in online sports betting for $10 million, but they will be limited in how they can brand their operations.

Both limit sports betting to adults aged 21 and older.

While Prop 27 does offer tribes access to online wagering, tribal gaming leaders have come out strongly against the measure. They criticize the online operators as out-of-state interests, and they claim that Californians trust them to manage gaming more than commercial businesses.

Although there are two sports betting measures on the ballot, there are actually four political committees that have been set up in response to the measures. According to records from the Secretary of State’s office, the four groups have already raised $183.8 million to promote or oppose a specific ballot initiative.

Given there are four months left before the election, odds are pretty good that the sports betting measures will break the state record for the cost of a political initiative. According to KQED, the current mark is $224 million, which was spent two years ago on Prop 22, which sought to exempt such companies Uber and Lyft from state labor law.

Here’s a rundown on each of the committees.

The “Coalition for Safe, Responsible Gaming,” supports Prop 26. It’s raised more than $19 million to date, The bulk of that money has come from the Agua Caliente Band of Cahuilla Indians, Barona Band of Mission Indians, and Yocha Dehe Winutn Nation. Each of them has contributed more than $5 million apiece.

The other tribal-backed group is “Californians for Tribal Sovereignty and Safe Gaming,” which is focusing its efforts against Prop 27. It released an ad earlier this week focusing on comments DraftKings CEO Jason Robins said at an investors’ conference last month. It has raised more than $35 million, with the San Manuel Band of Mission Indians putting up $25 million, and the Rincon Band of Luiseno Mission Indians contributing $10 million.

Seven sports betting operators have come together to form “Californians for Solutions to Homelessness and Mental Health Support,” a pro-Prop 27 group. It has more than $100 million in its coffers, with BetMGM, DraftKings, and FanDuel each contributing $16.7 million. BallyBET, Barstool Sportsbook, Fanatics Sportsbook, and WynnBet each have given $12.5 to the organization. Earlier this week, the group dropped commercials from small tribal nations that support its proposal.

The final group is “Taxpayers Against Special Interest Monopolies,” which is an anti-Prop 26 organization funded by cardroom casinos in the state. It has raised $29.8 million from several cardrooms, and $9 million of that has come from the Commerce Casino near Los Angeles. Cardrooms tried to launch their own sports betting petition, but it did not get enough signatures. The group and its supporters have raised concerns about the non-sports betting parts of Prop 26 and what impact that might have on cardrooms and the communities where they’re based.