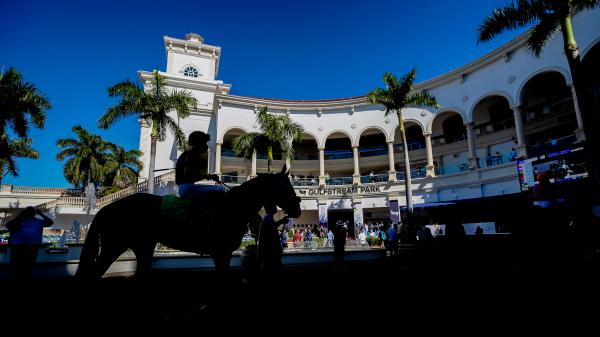 What to Know About the Pegasus World Cup Day Races

This Saturday’s card at Gulfstream Park is absolutely stacked.

The headlining race, of course, is the $3 million Pegasus World Cup Invitational, featuring some of the country’s top older horses in action. The field is headlined by last year’s winner, Knicks Go, who went on to win the Longines Breeders’ Cup Classic at Del Mar in November. His chief rival is Life Is Good, who is coming off an impressive win in the 2021 Big Ass Fans Breeders’ Cup Dirt Mile.

Let’s take a closer look at the supporting races on this year’s Pegasus program.

This race was conducted as the World Cup Turf for the first time in 2019. It was previously called the Gulfstream Park Turf Stakes. The first winner, Bricks and Mortar, used the race as a springboard to a Horse of the Year campaign. A field of 12 top grass horses will travel 1 ⅛ miles.

Mike Maker has a strong hand in this race, training three of the 12 invitees. He’ll send out Atone, who finished second in the Ft. Lauderdale Stakes last out; Cross Border, who was a two-time stakes winner last year; and Field Pass, coming off a win in the Seabiscuit Handicap at Del Mar. Maker won this race in 2020 with Zulu Alpha.

Last year’s winner, Colonel Liam, looks to become the first two-time winner of the Pegasus Turf. He rallied to win by a neck last year but has not raced since a disappointing performance in the Resorts World Casino Manhattan Stakes.

In addition to Colonel Liam, one other entrant won a Grade 1 race in 2021. The hard-knocking veteran Channel Cat won the Man o’ War Stakes by a nose last year in a gutsy performance. He’s very likely to be on the early lead in this spot.

This is the first edition of the Pegasus Filly and Mare Turf, which carries a purse of $500,000 and will be run at 1 1/16 miles on the grass. There were 12 invitees just as there were in the male equivalent.

The country’s top grass trainer, Chad Brown, is represented by Regal Glory, a recent Grade 1 winner. She won the Matriarch Stakes at Del Mar in her last start in a gate-to-wire performance. She’s very likely to be on or near the pace once again.

The top three finishers in the Suwannee River Stakes at Gulfstream on Dec. 18 are also on the invite list. Sweet Melania finished well to win by a half-length for trainer Todd Pletcher after rating off the pace. Pace-setting Shifty She led most of the way but was caught late and finished second, as she narrowly missed her fourth stakes win of 2021. Third-place finisher In a Hurry closed well late and is in improving form for the legendary owner-trainer combination of Stuart Janney and Shug McGaughey.

This race is also for fillies and mares on the grass, but at a marathon 1 ½-mile distance. It’s named after La Prevoyante, a brilliant Canadian-bred filly who won 12 races in a row as a 2-year-old in 1972. They’ll start on the backstretch, race through the homestretch, then pass the finish line and take one full lap of the track. So, when they pass in front of you for the first time, don’t get too excited … there’s still plenty of time left.

The top five finishers from the Via Borghese Stakes on Dec. 18 are all probable runners. Always Shopping, who won the La Prevoyante last year, finished first in the Via Borghese by a nose as the slight favorite. Harajuku, who led briefly in the stretch but lost the win photo, recently was shipped to the United States from Europe and has improved in every race. Her trainer, Graham Motion, has won this race twice in the last three years. Third-place finisher Beautiful Lover, fourth-place finisher Onyx, and fifth-place finisher Hungry Kitten are also scheduled to return here.

This seven-furlong dirt sprint is named after the champion older female of 1995. Two horses in this race are making their first start for a new barn. A G Indy has won three times in her last four starts, including a win in the Senator Ken Maddy Stakes last out. She was previously trained by Doug O’Neill but now races for Todd Pletcher. Just One Time won two Pennsylvania-bred stakes at Presque Isle Downs and Penn National. After her most recent win, Commonwealth New Era Racing purchased in interest in her and transferred her to Brad Cox.

Last year’s winner, Pacific Gale, also is listed as a probable entrant. She won the Hurricane Bertie Stakes later in the 2021 Gulfstream meet but has not won since then. She’s trying to become the first back-to-back winner of the Inside Information since Love’s Exchange in 1990 and 1991, who won the race when it was known as the Shirley Jones Handicap.

Dance d’Oro has never raced outside of South Florida. She made her stakes debut in the Rampart Stakes last out, and won by two lengths in a gate-to-wire performance. She’ll get her biggest class test to date here.

This race is for older horses at 1 ½ miles on the grass. It’s named after W.L. McKnight, who owned Florida-based Tartan Farms and campaigned many champions, most notably Dr. Fager.

The one to beat may be Abaan. This speedy gelding has won three of his last four races, including a front-running win in the H. Allen Jerkens Stakes on Christmas Eve at Gulfstream. He’s one of two probable entrants for Todd Pletcher. The other, Farmington Road, finished second in a second-level allowance-optional claiming race last out. He was eighth in the 2020 Belmont Stakes Presented by NYRA Bets.

Other noteworthy entrants include Bama Breeze, who was fourth in the Sycamore Stakes at Keeneland last out; and Mandate, who won the Artie Schiller Stakes at Aqueduct in a 44-1 upset in November.

A field of older males will travel one mile on dirt in this race, which previously was named after legendary owner and breeder Fred W. Hooper but was renamed this year in honor of recently retired multiple Grade 1 winner Charlatan.

Saffie Joseph Jr., one of the top trainers at Gulfstream, has three probable entrants. Girolamo’s Attack won twice in a row at the handicap level at this track last fall and looks to rebound off a seventh-place finish as the favorite in the Claiming Crown Jewel last out. Ny Traffic won the Hudson Handicap for New York-breds by 8 ¾ lengths last out in a very impressive performance. Officiating won the Mr. Prospector Stakes in his most recent start for his second stakes win in his last three races.

Promise Keeper won the Peter Pan Stakes at Belmont Park last May in impressive style. He’s making his first start since a fourth-place performance in the Ohio Derby in June. He showed a lot of promise last year and could use this race as a springboard to a successful 4-year-old campaign.

Speaker’s Corner attracted lots of attention last summer when he won a first-level allowance race at Saratoga by 5 ¼ lengths on Aug. 14. Off that win, he went off at 7-2 in the Pennsylvania Derby against top 3-year-olds such as Hot Rod Charlie and Midnight Bourbon. He was a disappointing sixth that day, but since then has won a second-level allowance optional-claiming race and finished second in the Discovery Stakes at Aqueduct.