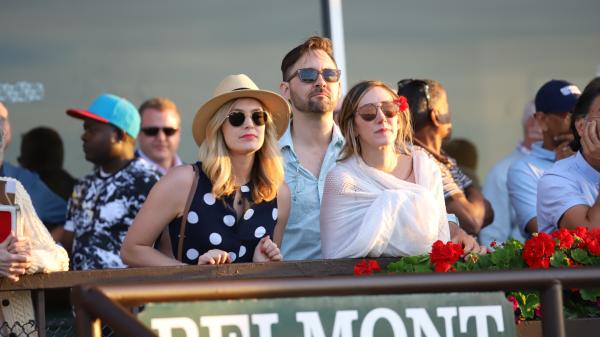 What You Need to Know Before You Go: 2022 Belmont Stakes

The third leg of racing’s Triple Crown takes place this Saturday, June 11, as Belmont Park plays host to the “Test of the Champion,” the Belmont Stakes Presented by NYRA Bets. Here’s what you need to know if you’re planning on heading to Belmont this weekend.

Rich Strike is Back

Five weeks ago, Rich Strike rallied from the back of the pack to pull off a shocking 80.80-1 upset in the Kentucky Derby Presented by Woodford Reserve. He skipped the Preakness Stakes to stay fresh for the Belmont. He worked five furlongs in 59 seconds at Churchill Downs in a public workout on Memorial Day and shipped to Belmont two days later. He’s had plenty of time to get acclimated to “Big Sandy” and should be ready to turn in a maximum effort.

NYRA Bets is the official wagering partner of NYRA, and the best place to bet the Belmont Stakes. If you want to avoid long lines on Belmont day, download the NYRA Bets app and play on your phone! You can sign up now and use the promo code “NYRA25” to get a $25 free bet on the Belmont Stakes plus a $200 sign-up bonus.

Get Ready to Take Flight

The Belmont day undercard is loaded with exciting stakes races. Perhaps the most notable one is the Hill ‘n’ Dale Metropolitan Handicap, also known as the “Met Mile.” This year’s edition is headlined by Flightline, based on the West Coast. He’s had a sporadic career, with just three starts since last April. However, he’s been brilliant in those three starts, winning them by a combined 37 ½ lengths. In his most recent start, he won the Runhappy Malibu Stakes by 11 ½ lengths while running seven furlongs in 1:21.37. He’s very likely to turn in another dazzling performance in his 2022 debut.

How to Get to the Track

Belmont Park is located off exit 26B on the Cross Island Parkway. Belmont offers ample parking for those traveling to the race by car.

The Long Island Rail Road will have trains going to and from Belmont all day long, making it easy for fans to take public transportation to and from the track. Check out the full schedule here.

Check Out the Live Entertainment

The entertainment lineup at this year’s Belmont is headlined by DJ Pauly D, who will DJ in Club 154 Presented by Mohegan Sun from 4:15 p.m. to 6:15 p.m. ET. No additional charge is required to enter Club 154, which is located on the west end of the grandstand.

The day before the Belmont, Club 154 will play host to the New York Bee Gees, which spotlights music from across the Bee Gees catalogue. Members of the band have played with Queen, Meat Loaf, the Alan Parsons Project, and the Blue Oyster Cult. They’ll play from 6:30 p.m. to 7:45 p.m. ET.

Tickets remain available for the Belmont. The track offers ample grandstand seating, at $60 per person. Numerous other ticket packages are available, with some including access to premium buffet offerings, open bars, and more! Check out all your options here.

Like the Kentucky Derby’s Mint Julep and the Preakness’s Black-Eyed Susan cocktails, the Belmont its their own signature drink, the Belmont Jewel. It’s made from Woodenville Straight Bourbon Whiskey, lemonade, pomegranate juice, and orange zest. It’s a great way to enjoy the day, and it comes in a souvenir glass you can bring home.

Know What You Can and Can’t Bring

Before you head to Belmont, it’s important to know what you can and can’t bring to the track. Tote bags, non-alcoholic beverages in plastic containers, and purses no larger than 12” in diameter are permitted. Banners, umbrellas, and tents are among prohibited items.

See the full list of allowed and prohibited items here.