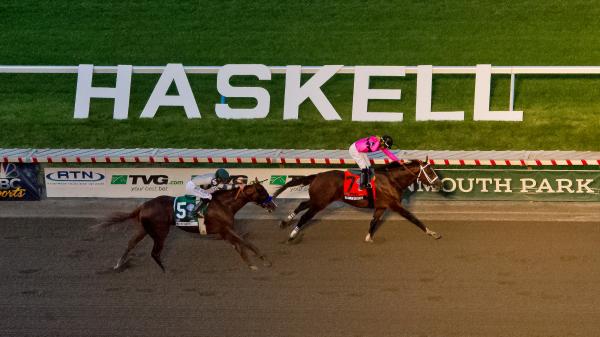 Where to Watch/Listen: Haskell Stakes and Del Mar’s Opening Weekend

Arguably the biggest weekend of July on the North American horse racing calendar is coming up, featuring a marquee race for 3-year-olds at Monmouth Park that also serves as a “Win and You’re In” for the Longines Breeders’ Cup Classic, the second weekend of one of the two premier summer race meets in the U.S., and the opening weekend for the other.

Saturday’s TVG.com Haskell Stakes at Monmouth Park offers an automatic berth to the Nov. 5 Longines Classic at Keeneland and is expected to draw budding star Jack Christopher. The Haskell will be televised by NBC Sports as part of its “Road to the Breeders’ Cup” series, airing on CNBC during a show from 5 p.m. to 6 p.m. ET.

Action from the second week of racing at historic Saratoga is featured on “Saratoga Live,” presented by America’s Best Racing and Claiborne Farm. The NYRA-produced show runs from Wednesday to Sunday this week on FS2 and FS1 – check the below schedule for air times.

Out in sunny southern California, Del Mar’s highly anticipated meet kicks off Friday and runs through Sept. 11. TVG is the go-to network for Del Mar racing and will have extensive on-site coverage throughout the meet. Racing from other tracks including Gulfstream Park, Ellis Park, Laurel Park, and Woodbine will also be shown on TVG as part of its comprehensive package.

ABR’s livestreaming coverage this week is highlighted by “Breeders’ Cup LIVE! – Haskell Stakes,” an on-site show from Monmouth Park Saturday. The show, which has a tentative start time of 4:30 p.m. ET, will be hosted by Dan Tordjman and Mike Somich and feature a variety of special guests including handicappers and analysts. “Breeders’ Cup LIVE! – Haskell Stakes” airs on ABR’s Facebook, Twitter, and YouTube channels and on Breeders’ Cup’s Facebook, Twitter, and YouTube channels.

“Saratoga Saturdays” will return for its second weekend of the meet Saturday at 9 a.m. ET. Presented by NYRA Bets, the show is hosted by Jonathon Kinchen and Anita Marks and will preview the Saturday card at the spa. “Saratoga Saturdays” runs each Saturday through Sept. 3 and is available on ABR’s Facebook, Twitter, and YouTube channels as well as Jonathon’s Twitter account and Anita’s Twitter account.

Here’s a rundown of TV, livestreaming, and radio coverage for a busy week in horse racing.

2022-07-19
Previous Post: Four Winds Casinos to hold a job fair with sign-on bonus in Indiana on Wednesday
Next Post: Who Will Start Game 1 at QB for Atlanta, Carolina in 2022? –