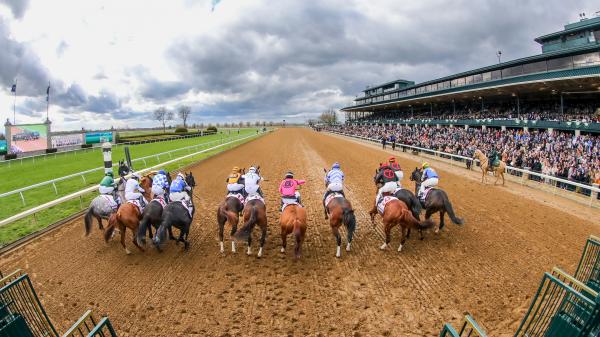 Where to Watch/Listen: Horse Racing Coverage for April 13-16

Last weekend, the final three major preps for the 2022 Kentucky Derby Presented by Woodford Reserve were held, and most of the main contenders for the run for the roses will now make their way to Louisville and begin training.

There’s still one more qualifying points prep on the schedule, however. Saturday, April 16 at Keeneland, a few Derby contenders will square off in the Stonestreet Lexington Stakes in a final attempt at securing a spot in the Kentucky Derby starting gate on May 7. The Lexington offers qualifying points on a 20-10-4-2 basis to the top four finishers.

The Lexington Stakes will be televised on TVG as part of their comprehensive coverage that also includes “Today at Keeneland.” This 30-minute preview show is hosted by racing analysts Gabby Gaudet and Scott Hazelton, and it airs live at 11:30 a.m. ET every race day on TVG2, Keeneland.com, Keeneland Select, and Keeneland’s YouTube channel.

TVG will also present action from many other tracks in North America and abroad, including the opening-day card for Woodbine’s 2022 season on Saturday.

Racing from Aqueduct and Oaklawn Park is showcased on “America’s Day at the Races.” The NYRA-produced show airs from Thursday to Saturday on FS2 – check the schedule below.

For livestreaming coverage, on Wednesday, April 13, ABR’s show “Devine and the Dog” is back beginning at 6 p.m. ET. Hosted by racing analyst Megan Devine and horseplayer and raconteur Chase Sessoms, aka “The Wolf of Oaklawn,” “Devine and the Dog” can be streamed on ABR’s Facebook, Twitter and YouTube channels.