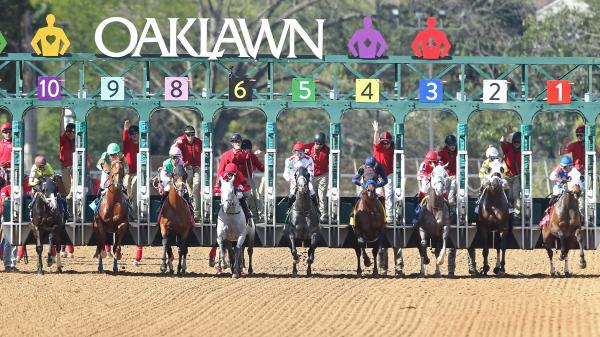 Where to Watch/Listen: Horse Racing Coverage for April 21-24

The upcoming weekend in horse racing is light on major stakes action as the main focus shifts toward the 148thKentucky Derby Presented by Woodford Reserve on May 7. That Saturday, and the day prior at Churchill Downs featuring the Longines Kentucky Oaks, comprises arguably the highlight of the 2022 racing calendar and coverage of the sport will saturate TV, radio, and livestreaming channels across North America and abroad for several days leading up to the Oaks and Derby.

For now, however, top-class racing continues at tracks around the U.S. and Canada, highlighted by the $1 million, Grade 1 Apple Blossom Handicap Saturday, April 23, at Oaklawn Park. That race for older fillies and mares includes champion older dirt female Letruska and champion female sprinter Ce Ce in a small but stellar five-horse field.

Racing at Oaklawn Park and Aqueduct is showcased on “America’s Day at the Races.” The NYRA-produced show airs from Thursday to Sunday on FS2 – check the schedule below.

Action at Keeneland, Woodbine, Gulfstream Park, Santa Anita Park, Laurel Park, and many other tracks will be shown on TVG as part of their comprehensive coverage. TVG’s Keeneland coverage also includes “Today at Keeneland.” This 30-minute preview show is hosted by racing analysts Gabby Gaudet and Scott Hazelton, and it airs live at 11:30 a.m. ET every race day on TVG2, Keeneland.com, Keeneland Select, and Keeneland’s YouTube channel.

For livestreaming content, the popular “La Trifecta” returns this Thursday, April 21 at 8 p.m. ET for a new show. Presented en Español, “La Trifecta” is hosted by Darwin Vizcaya, Claudia Spadaro, and Annise Montplaisir. This week’s show will be broadcast on ABR’s Facebook, Twitter and YouTube channels.