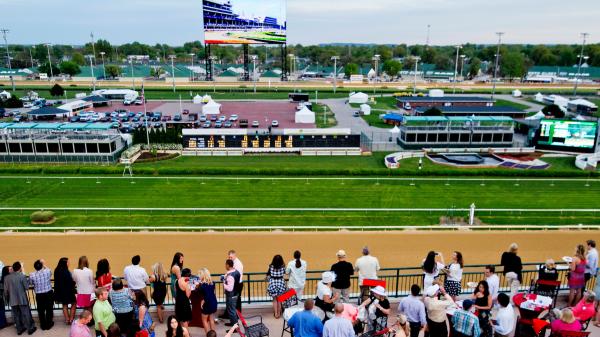 Where to Watch/Listen: Horse Racing Coverage for April 27-May 1

The 2022 Kentucky Derby Presented by Woodford Reserve is 11 days away, and media coverage of preparations for North America’s signature race is ramping up. Whether you’re tuning in on TV, radio, or via computer or mobile device, a variety of shows are on the schedule offering race previews, features, handicapping tips, and other content leading up to the run for the roses.

Livestreaming of contenders training for the Kentucky Derby and the Longines Kentucky Oaks is already underway courtesy of Churchill Downs. The “Kentucky Derby Morning Works Presented by TwinSpires.com” started on April 25 and will air every morning from 7 a.m. to 8 a.m. ET ending on Thursday, May 5. The show is hosted by Churchill Downs analyst and handicapper Joe Kristufek. Retired Kentucky Oaks-winning jockey Rosie Napravnik will join the broadcast on Friday, April 29, and Churchill Downs track announcer Travis Stone will be on the set April 27-28.

“Kentucky Derby Morning Works Presented by TwinSpires.com” is streamed live on KentuckyDerby.com/works and on several of the Kentucky Derby social media channels including Facebook, Twitter and YouTube.

On television, “America’s Day at the Races” will provide coverage of opening night at Churchill Downs on Saturday, April 30, as well as comprehensive coverage of Belmont Park’s spring meet, which begins Thursday, April 28. The NYRA-produced show will also show live racing from Oaklawn Park, and airs this week from Thursday to Sunday on FS2 – check the schedule below for air times.

TVG will broadcast live racing from Keeneland over the final three days of its spring meet ending Friday, April 29. The network will also show races daily from Santa Anita Park, Gulfstream Park, Woodbine, and a host of other tracks as part of its usual package. TVG’s Keeneland coverage also includes “Today at Keeneland.” This 30-minute preview show is hosted by racing analysts Gabby Gaudet and Scott Hazelton, and it airs live at 11:30 a.m. ET every race day on TVG2, Keeneland.com, Keeneland Select, and Keeneland’s YouTube channel.

America’s Best Racing presents a loaded schedule of livestreaming shows over the next week and a half, highlighted this week by “Woodbine Live! Path to the Plate: Woodstock Stakes,” set for Sunday, May 1. The show will provide analysis leading up to the Woodstock Stakes at Woodbine, a prep race for Queen’s Plate (the first leg of the Canadian Triple Crown scheduled for Aug. 21). ABR’s Dan Tordjman will host “Woodbine Live!” Sunday with guest appearances from Chase Sessoms, J.D. Fox and Jessica Paquette. The show has a tentative start time of 4 p.m. ET and can be viewed on ABR’s Facebook, Twitter, and YouTube channels.

The popular “La Trifecta” also returns this Wednesday at 8 p.m. ET for a new show. Presented en Español, “La Trifecta” is hosted by Darwin Vizcaya, Claudia Spadaro, and Annise Montplaisir. This week’s show will be broadcast on ABR’s Facebook, Twitter and YouTube channels.