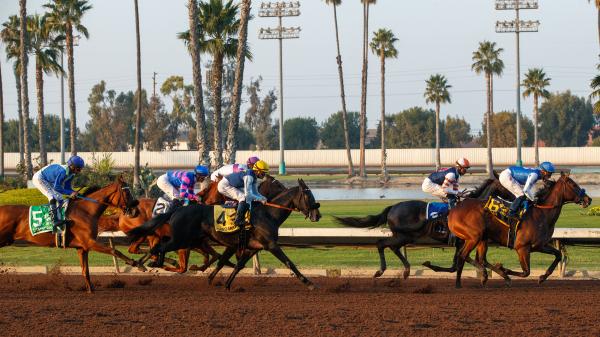 Where to Watch/Listen: Horse Racing Coverage for Dec. 9-12

Following some important stakes on Dec. 4 in New York, the marquee events slow down for a couple of weeks in December, traditionally the least active month on the North American horse racing calendar.

Things are a bit different in a good way this year, however, as Oaklawn Park has extended its annual meet to begin earlier this month and run all the way until May, adding to the roster of tracks in operation.

The upcoming weekend is highlighted by the $300,000, Grade 2 Los Alamitos Futurity at Los Alamitos on Saturday, Dec. 11, which awards qualifying points to the 2022 Kentucky Derby Presented by Woodford Reserve to the top four finishers.

Racing at Aqueduct and Oaklawn Park will be featured on the NYRA-produced “America’s Day at the Races” show presented by America’s Best Racing from Friday to Sunday on FS2 and FS1 – check the below schedule for air times.

Racing at Los Alamitos, Gulfstream Park and other tracks in North America and abroad will be showcased on TVG as part of that channel’s comprehensive package.

For live streaming coverage this week, a new edition of “La Trifecta” will air Thursday, Dec. 9, at 8 p.m. ET. Presented en Espanol, the show is hosted by Darwin Vizcaya, Claudia Spadaro, and Annise Montplaisir. It airs on ABR’s Facebook, Twitter, and YouTube channels.

2021-12-13
Previous Post: BetUS Announced as Sportsbook of the Year for 2021
Next Post: What are the Advantages of Playing via Online Casinos? – How to Find the Best Platforms