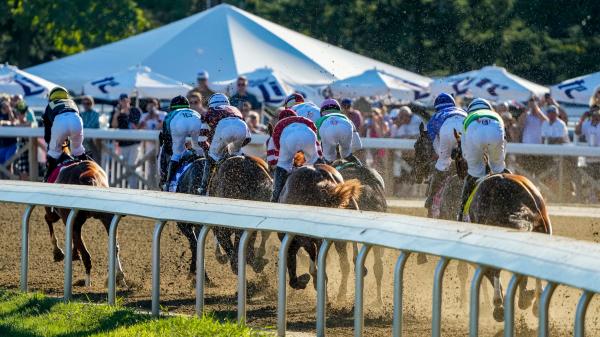 Where to Watch/Listen: Horse Racing Coverage for Labor Day Weekend 2022

After a thrilling weekend highlighted by Epicenter’s win in the Runhappy Travers Stakes, the summertime portion of the North American Thoroughbred racing calendar reaches its swan song over the upcoming Labor Day weekend.

The Jockey Club Gold Cup, along with the Flower Bowl Stakes (a “Win and You’re In” race for the Maker’s Mark Breeders’ Cup Filly and Mare Turf) will be shown live on NBC during a broadcast from 4:30 p.m. to 6 p.m. ET as part of their Road to the Breeders’ Cup series presented by America’s Best Racing.

Other key races at Saratoga during its final weekend will air on “Saratoga Live,” including the Spinaway Stakes Sunday for 2-year-old fillies and the Hopeful Stakes for 2-year-old males on Labor Day, Saratoga’s closing day. NYRA-produced “Saratoga Live” will be shown on FS2 and FS1 from Wednesday through Monday – check the below schedule for air times.

The Pacific Classic along with the Del Mar Handicap Presented by The Japan Racing Association (a Challenge Series prep for the Longines Breeders’ Cup Turf) and the Green Flash Handicap (a qualifier for the Breeders’ Cup Turf Sprint) will be broadcast on FanDuel TV. The longtime horse racing network TVG is undergoing a brand name change this week to incorporate new sports betting content and more closely identify with parent company FanDuel. The newly branded FanDuel TV will continue to air horse races from around the world as part of its package, including the boutique FanDuel meet at Kentucky Downs, which kicks off on Thursday.

For livestreaming content, “Saratoga Saturdays” wraps up for the year on Saturday Sept. 3 at 9 a.m. ET. Presented by NYRA Bets, the show is hosted by Jonathon Kinchen and Anita Marks and will preview the Jockey Club Gold Cup, the Flower Bowl, and other big races at the Spa. “Saratoga Saturdays” is available on ABR’s Facebook, Twitter, and YouTube channels as well as Jonathon’s Twitter account and Anita’s Twitter account.