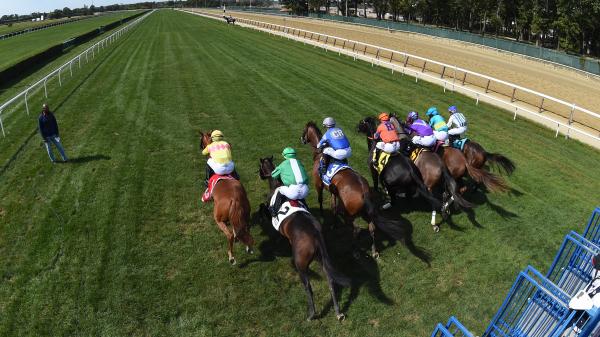 Where to Watch/Listen: Horse Racing Coverage for Oct. 28-31

As the horse racing world gears up for the Breeders’ Cup at Del Mar on Nov. 5-6, top-class competition continues at tracks around the country, including Keeneland Race Course, Belmont Park, and Santa Anita Park. The 38th World Championships will be televised by NBC Sports on both NBC and NBCSN, and ABR’s complete guide to the week’s coverage will be available on Nov. 1.

In the meantime, racing at Keeneland and Santa Anita during the final weekend of their respective fall meets will air on TVG, and action from Belmont Park will be broadcast on the NYRA-produced “America’s Day at the Races” show – check the below schedule for air times. Fox Sports will also present live coverage of the Victoria Derby from Flemington Racecourse in Australia overnight Friday-Saturday, Oct. 29-30.

For live streaming coverage this week, a new edition of “La Trifecta” will air Thursday, Oct. 28, at 8 p.m. ET. Presented en Espanol, the show is hosted by Darwin Vizcaya, Claudia Spadaro, and Annise Montplaisir. It airs on ABR’s Facebook, Twitter, and YouTube channels.

The next edition of ABR’s “The Winner’s Circle” will air on Tuesday, Nov. 2 and will be included in our Breeders’ Cup schedule.

Here’s a rundown of television, live streaming, and radio coverage for the upcoming week: