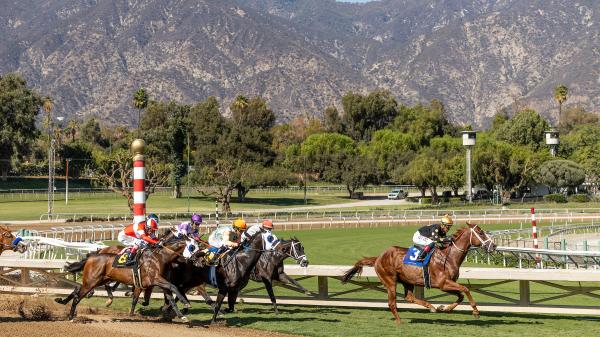 The next 2 ½ weeks will be a whirlwind of excitement for horse racing fans in North America and abroad as the Breeders’ Cup “Win and You’re In” Challenge Series concludes with over two dozen prep races set to run that offer automatic bids to the 14 Breeders’ Cup World Championship races Nov. 4-5 at Keeneland.

This upcoming weekend, the focus is on four tracks: Santa Anita Park, Churchill Downs, and Belmont at the Big A in the U.S.; and Longchamp Racecourse in Paris, France. Santa Anita will host two “Win and You’re In” preps, highlighted by the Awesome Again Stakes on Saturday, Oct. 1, which offers a bid to the Longines Breeders’ Cup Classic.

Santa Anita’s Breeders’ Cup preps will be shown live on FanDuel TV as part of its international package that will also televise races from Gulfstream Park, Woodbine, Pimlico, and many other tracks.

At the special Belmont at the Big A meet, held this fall at Aqueduct while Belmont Park undergoes construction, four Breeders’ Cup preps are on the schedule, led by the Champagne Stakes Saturday, Oct. 1 (a prep for the TVG Breeders’ Cup Juvenile) and the Frizette Stakes Sunday, Oct. 2 (NetJets Breeders’ Cup Juvenile Fillies). Churchill Downs will run one “Win and You’re In” race Saturday: the Ack Ack Stakes, which sends its winner to the FanDuel Breeders’ Cup Mile.

Saturday, NBC Sports will show both the Champagne Stakes and the Miss Grillo Stakes (a prep for the Breeders’ Cup Juvenile Fillies Turf) nationally on NBC as well as on its Peacock livestreaming service, airing from 4 p.m. to 6 p.m. ET.

Sunday’s Breeders’ Cup preps at Belmont and the Big A and Saturday’s Ack Ack at Churchill Downs will air on NYRA’s “America’s Day at the Races” as part of its Wednesday-Sunday slate. The program, presented by America’s Best Racing, will be shown on FS2 – check the below schedule for air times.

Overseas at Longchamp, five Breeders’ Cup Challenge Series races will be held Sunday, Oct. 2, including the prestigious Qatar Prix de l’Arc de Triomphe, a prep for the Longines Breeders’ Cup Turf. The Arc, plus other action from Longchamp, will be shown a special Sunday morning “America’s Day at the Races” broadcast on FS2.

Here’s a rundown of this week’s TV, livestreaming, and radio coverage.