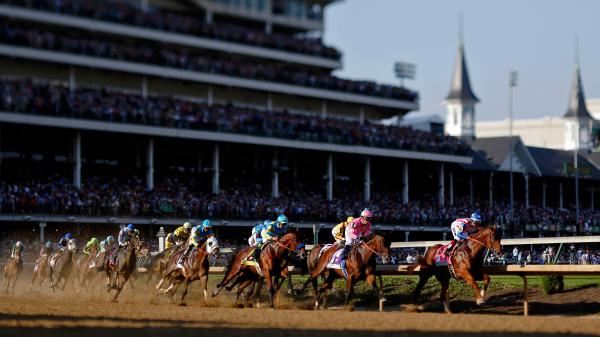 Where to Watch/Listen: Kentucky Derby Week 2022

Media coverage of horse racing reaches its peak this week, leading up to the 148th Kentucky Derby Presented by Woodford Reserve Saturday, May 7. The race drew earlier than usual, on Monday, May 2, and the 20-horse field (with two also-eligibles) is set. For the next five days, television, radio and digital programming from sources around the world will zero in on iconic Churchill Downs as the contenders wrap up their final training and around 150,000 fans flock to Louisville for a bucket-list experience.

NBC Sports will provide comprehensive coverage up to the Kentucky Derby and will show the race live at approximately 6:57 p.m. ET Saturday. The network’s on-site broadcast begins Friday, May 6, with a five-hour show from 1 p.m to 6 p.m. ET on USA Network that will present live racing from Churchill culminating in the Longines Kentucky Oaks for 3-year-old fillies as well as Derby previews and features. On Saturday, coverage from Churchill begins at noon ET on USA Network and then switches to NBC from 2:30 to 7:30. That telecast will feature live racing from the Derby undercard as well as more previews, analysis, and features.

For the first time, NBC Sports’ Derby coverage will be livestreamed on its Peacock service. Highlights of the two-day broadcast include a discussion of embattled trainer Bob Baffert’s suspension and its effect on Derby 148 and the sport overall, a segment on the rise of horse racing in Japan, “Kentucky Derby According to 3-year-olds,” a segment featuring interviews with 3-year-old kids talking about their favorite 3-year-old Derby contenders, a live drone and two jockey cam systems for an immersive racing experience, and a 360 Glam Cam on the red carpet to capture celebrities’ fashion choices and picks for the race. The network’s Derby coverage will also be available on NBCSports.com and the NBC Sports app.

Racing from Churchill Downs on Tuesday, Wednesday, and Thursday, aka “Thurby,” will be featured on “America’s Day at the Races.” The NYRA-produced program will also show racing from Belmont Park and the final race days of Oaklawn Park’s meet and present a special Kentucky Derby preview Friday, May 6 at 6 p.m. ET. “America’s Day at the Races” will be shown primarily on FS2 with one slot on FS1 – check the below schedule for air times.

America’s Best Racing is the go-to destination for livestreaming content all through Derby week. First up, Joy Taylor hosts “Derby Preview LIVE!” Tuesday, May 3 at 8 p.m. ET. The show features handicapping from Jonathan Kinchen and will air on ABR’s Facebook, Twitter, and YouTube channels as well as on Joy’s Twitter channel and Jonathan’s Twitter channel.

Thursday, May 5 begins a three-day run of on-site livestreams from Churchill Downs with “TwinSpires Presents ABR Thurby LIVE!” This show is hosted by Ren Carothers and Dan Tordjman from the TwinSpires infield tent at Churchill and will feature coverage of live racing and the “locals day” at the track. It has a tentative start time of 4 p.m. ET and will air on ABR’s Facebook, Twitter, and YouTube channels.

On Friday, May 6, “TwinSpires Presents ABR Kentucky Oaks LIVE!” will stream from the TwinSpires infield tent, with a tentative start time of 4:30 p.m. ET. This show will cover races, sights and sounds from a spectacular day and will also be hosted by Ren Carothers and Dan Tordjman. It will air on ABR’s Facebook, Twitter, and YouTube channels.

And finally, on May 7, “TwinSpires Presents ABR Kentucky Derby LIVE!” streams from the TwinSpires infield tent with hosts Danielle Moinet and Dan Tordjman. The show, which will include special guests, lifestyle segments, and handicapping tips for Derby 148, has a start time of 1 p.m. ET and an extended run time of 2 ½ hours. “TwinSpires Presents ABR Kentucky Derby LIVE!” will be available on ABR’s Facebook, Twitter, and YouTube channels.

Livestreaming of contenders training for the Derby and Oaks continues with “Kentucky Derby Morning Works Presented by TwinSpires.com,” which ends on Thursday, May 5. The show is hosted by Churchill Downs analyst and handicapper Joe Kristufek and is streamed live on KentuckyDerby.com/works and on several of the Kentucky Derby social media channels including Facebook, Twitter and YouTube.

2022-05-03
Previous Post: Gross Gaming Revenue in Macau Hits Rock Bottom in April
Next Post: Everything You Need to Know About Doyle Brunson’s Biopic, which is In Development