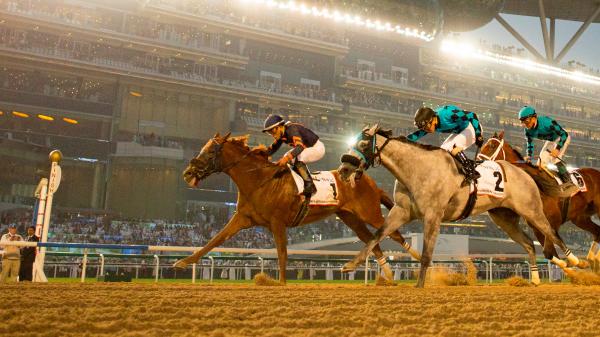 Where to Watch/Listen: Louisiana Derby and Dubai World Cup Week 2022

After a week of relative quiet on the North American racing calendar, activity picks back up in a big way over the next several days, and the focus will expand beyond this continent over to the desert sands of Dubai in the Middle East, where several top U.S. horses are slated to compete at Meydan Racecourse.

Fox Sports provides coverage of Saturday’s races from Dubai from 8 a.m. to 1 p.m. ET on FS2. The Dubai World Cup will be broadcast during a special hour-long show from noon to 1 p.m., and the $1 million UAE Derby Sponsored by Mubadala, a qualifying points race for the 2022 Kentucky Derby Presented by Woodford Reserve, will be broadcast earlier during the undercard show.

The other big event slated for Saturday is the $1 million, Grade 2 Twinspires.com Louisiana Derby at Fair Grounds. This race is also a qualifier for the Kentucky Derby on May 7, and has a scheduled post time of 6:44 p.m. ET.

TVG will broadcast the Louisiana Derby along with other stakes from Fair Grounds as part of its comprehensive package. The network will also broadcast Saturday’s races from Dubai.

On Sunday, March 27, the $500,000, Grade 3 Sunland Park Derby will be held for the first time since 2019. The Kentucky Derby qualifier at Sunland Park will be shown on TVG with a scheduled post time of 7:15 ET.

Racing from Aqueduct, Tampa Bay Downs and Oaklawn Park will be televised live on “America’s Day at the Races.” The NYRA-produced show airs from Thursday to Sunday on FS2 and FS1 – check the schedule below.

For livestream content, the popular “La Trifecta” returns this Thursday, March 24 at 8 p.m. ET for a new show. Presented en Espanol, “La Trifecta” is hosted by Darwin Vizcaya, Claudia Spadaro, and Annise Montplaisir. This week’s show will be broadcast on ABR’s Facebook, Twitter, and YouTube channels.