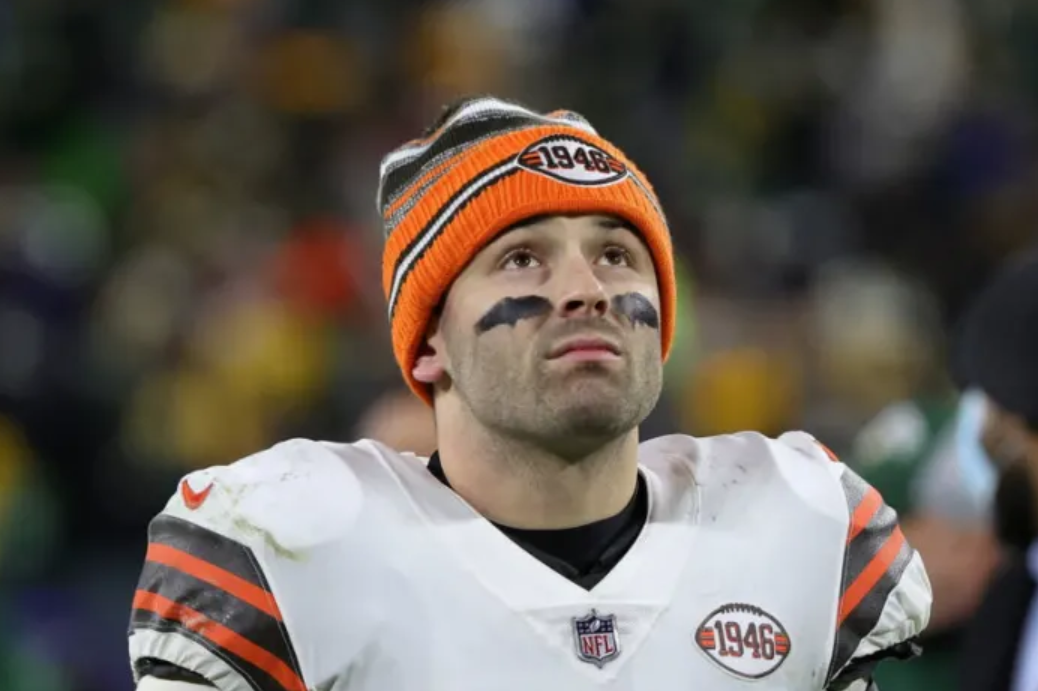 Where Will Baker Mayfield Land? –

It’s no secret that Baker Mayfield will no longer have the keys to FirstEnergy Stadium, which is funny because those TV commercials of he and his wife living at the stadium were insufferable (look at the stupid look on his wife’s long narrow face). Cleveland went out in the offseason and signed former Houston QB Deshaun Watson to a five-year, $230 million contract. All $230 million is guaranteed as well, which sends a serious message to Mayfield. You are no longer wanted.

The Browns former No. 1 draft pick and starting quarterback for the past four seasons, Mayfield is still under contract with Cleveland.  That is a big issue. Watson being the de facto No. 1 quarterback is also an issue for Mayfield. So, where does he go? Where will Baker Mayfield land?

Stay with the Browns

He is actually favored to stay with Browns

On the betting board, at the very top of the Baker Mayfield Next Team Odds list is … the Cleveland Browns. The Browns made what they didn’t know would be a huge mistake when they exercised the fifth-year option on Mayfield’s rookie contract. Now, Cleveland is on the hook for $18 million.

There aren’t many suitors out there that want to take on a quarterback that might not be a starter at a price tag of $18 million. Mayfield’s contract was fully guaranteed, so the Browns are paying Mayfield one way or another. At this point, Cleveland may have to suck it up and keep Mayfield as an $18 million backup. Or not. Either way, the Browns are still the favorite to keep Mayfield in 2022. Cleveland is given -220 odds at #1 sportsbooks.

Than to be in Carolina! Except there’s just no way the Panthers are going to be interested in Mayfield now. The Panthers picked QB Matt Corral of Ole Miss in the third round of this year’s draft. There was some speculation leading up to the draft that Carolina might make a deal for Mayfield. Not too long before the draft, Panthers head coach Matt Rhule said that Sam Darnold is their starting quarterback.

Then came the selection of Corral. While it seems unlikely, Carolina could still come back and make a pitch for Mayfield. The problem, of course, is the $18 million price tag. Corral is a cheaper option. Carolina is given +275 odds as Mayfield’s new home in 2022.

The Seahawks traded Russell Wilson to Denver in the offseason and picked up former Broncos QB Drew Lock in the process. Then, Seattle re-signed Geno Smith who has served as Wilson’s backup for the past three seasons. The Seahawks also re-signed No. 3 quarterback Jacob Eason.

Seattle is in the midst of a complete rebuild and none of Lock, Smith, or Eason is the franchise quarterback of the future. Mayfield isn’t either. The Seahawks could entertain a trade with Cleveland but…there’s that contract again. Seattle has Smith on a one-year deal for $3.5 million, Eason is in the third year of his four-year contract making $895K, and Lock is in the last year of his rookie contract earning $1.3 million this season.

Why the Seahawks would pay $18 million for a guy that isn’t going to be the franchise quarterback of the future? They probably won’t, but the Seahawks are next on the betting board at +290 at online sportsbooks.

Filling out the top five on the board are Houston (+650) and Atlanta (+1500). Both could use a veteran quarterback. The Texans, of course, lost Watson and Atlanta traded Matt Ryan to Indianapolis (where aging QB’s seem to go to give it one last shot) in the offseason.

Both teams have solutions though. Houston turned to Davis Mills last season and seems to be okay with his development. Kyle Allen is a solid – and much cheaper – backup and Jeff Driskel and Kevin Hogan are also on the roster.

In Atlanta, the Falcons brought in former Tennessee starter Marcus Mariota. He’ll be the likely Day 1 starter. Atlanta then selected Cincinnati QB Desmond Ridder in the third round of this year’s draft. With those moves, it seems unlikely the Falcons would work a trade for Mayfield.