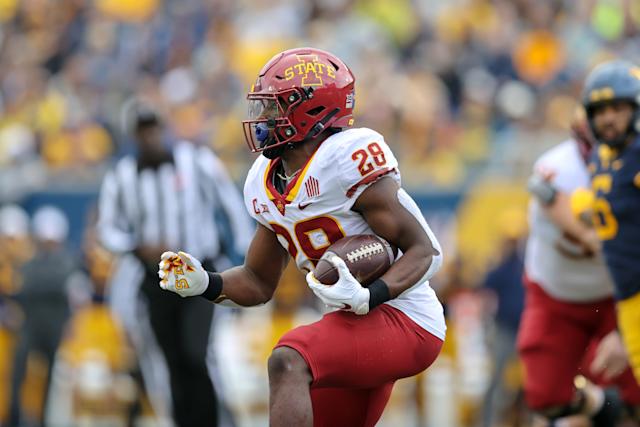 The 2022 NFL draft is now just a few short weeks away. Teams are typically reluctant to draft running backs in the first round. Look at NFL rosters and you will find a number of teams that get by without a top prospect at the position.

Last season, the first running back selected was Najee Harris who went to Pittsburgh with the No. 24 selection.  Jacksonville took Clemson RB Travis Etienne with the very next pick. Harris and Etienne were the only running backs chosen in the first round last year. The previous year, it wasn’t until the very last pick of the first round that Kansas City took Clyde Edwards-Helaire.

While running back isn’t a priority for every team, there are a handful of teams like Houston and Atlanta that would benefit from a big-time back. The 2022 running back draft class has a few guys at the top worthy of being the first taken. Who will it be?

Breece Hall was never a household name. He was an underrated high school recruit out of Northwest HS in Wichita, Kansas. Hall ended up at Iowa State and eventually became a starter. He very quietly became a two-time AP All-American, a two-time Big 12 Offensive Player of the Year, and a two-time top-10 Heisman Trophy finalist.

Last season, Hall ran for 1,472 yards and 20 touchdowns. He also caught 36 passes proving that he is not just a one-dimensional back. Hall really separated himself from the rest of the pack with his performance at the NFL Combine. He ran a 4.39 40-yard dash, recorded a 40-inch vertical jump, and a 10-6 broad jump. At 5-11 and 220 pounds, Hall has the size, speed, and explosive ability that NFL teams look for in a running back. That’s why he’s the -250 favorite at online sportsbooks to be the first running back selected in this year’s draft.

Kenneth Walker III was a good running back at Wake Forest who decided to transfer to Michigan State. It turned out to be a good move. Walker ran for 1,636 yards and 18 touchdowns. He had two games with over 200 yards rushing. He helped himself at the combine by running 4.38 in the 40. At 5-9 and 210 pounds, Walker has the build of an NFL running back. The question is if he has a dominant trait. In the right scheme, Walker could be an immediate NFL success. That’s why he is listed at +200 to go first.

Isaiah Spiller (+650) and Kyren Williams (+1800) are both contenders to go first. Spiller has good size at 6-1 and 215 pounds, but he lacks the desired NFL third-down value. Williams is a bit on the smaller side at 5-9 and 199 pounds. His 4.65 in the 40 at the combine really hurt and it’s unlikely to see him go first among such a talented group of running backs.

The previous two seasons – 2020 and 2019 – Tennessee’s Derrick Henry was the NFL’s leading rusher. He is 6-3 and weighs 240 pounds. The best rushing offenses in the NFL like guys with a certain size-speed combination. One guy in this draft fits that profile.

Brian Robinson Jr. did not start at Alabama until this season. He played behind Harris and finally got his shot this year. Remember, he’s the guy that ran for 204 yards in the College Football Playoff semifinal victory over Cincinnati. Robinson checks in at 6-2 and 226 pounds. He ran the 40-yard dash in 4.53 seconds at the combine. While he doesn’t have the hype of some of the others in this running back class, Robinson does have the size, the speed, and the pedigree having played at Alabama. Robinson is a longshot at +2500 at online sportsbooks to be picked first. If you are looking for the most bang for your buck this pick is it.