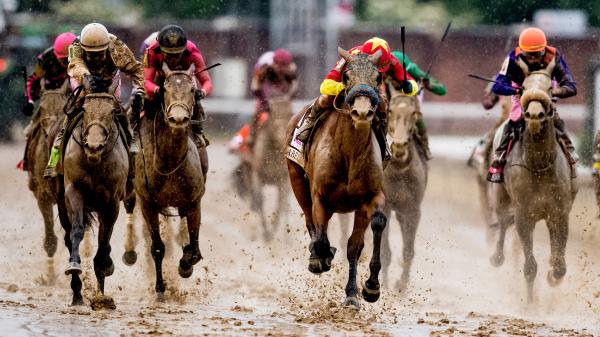 Which Runners Benefit From a Wet Track in the 2022 Kentucky Oaks?

Every year in advance of the Kentucky Derby Presented by Woodford Reserve, we produce a feature on which horses in the run for the roses might most benefit from a wet track on race day. With steady rain in the forecast for Friday, May 6, in Louisville, the Longines Kentucky Oaks could be held in wet conditions and very likely will be contested on an “off” track at Churchill Downs.

For those uninitiated with track conditions, a dry main dirt track is rated as “fast,” while an “off” track can be rated from “good” to “sloppy.”

Here is a quick explanation of dirt track conditions you might see/hear on Kentucky Oaks or Kentucky Derby day:

For this exercise, I’ll take a look at the cast of fillies assembled for the $1.25 million Kentucky Oaks, which drew a full field of 14, plus also-eligible entrant Beguine. In order to draw into the field, Beguine would need one of the 14 horses in the field to be scratched from the race, which would seem to be more likely with rain forecasted if a trainer knows there is a high likelihood that his 3-year-old filly will not care for a wet track.

Because these are lightly raced 3-year-olds, quite a few of them have no experience racing on a wet track. They probably have been tested in such conditions during training hours, but from an outsider looking at their past performances we have no track record to go by.

Pedigree can play a major factor in how a racehorse handles wet surfaces, as many “Seinfeld” fans will recall an all-time great scene that touched on the importance of bloodlines as it pertains to “mudders.”

When it comes to pedigree or bloodlines as a predictor of potential success on “off” tracks, we’ll refer to the Daily Racing Form’s Tomlinson ratings. The higher the rating the better. According to Daily Racing Form, a wet track rating of 320+ merits consideration on a muddy or sloppy track. As a group, the Oaks entrants graded out quite well according to the Tomlinson ratings.

I also took a look at the past performances for each of the Oaks contenders’ dams (mothers) to see how they performed on “off” tracks.

Arkansas Derby third-place finisher Secret Oath is the lone filly in the field with experience at Churchill Downs on an “off” track. She finished third, beaten by 10 ¼ lengths in her career debut on a sloppy track Oct. 3, 2021. Given it was her debut, it’s fair to assume this was a learning experience, but she has one of the lower Tomlinson ratings in the field and her dam, Absinthe Minded was 1-for-3 on “off” tracks. I would downgrade her chances slightly on a wet track.

Nest won the Central Bank Ashland Stakes by 8 ½ lengths on a wet-fast track at Keeneland on April 8. She has the second-highest Tomlinson rating in the field and just a superb wet-track pedigree. Her sire, Curlin, won the 2007 Breeders’ Cup Classic in monsoon-like conditions at Monmouth Park and her dam, Marion Ravenwood, was 2-for-2 on “off” tracks, including a stakes win on muddy track. You almost have to use morning-line favorite Nest in multi-race bets and exactas/trifectas if there is a wet main track on Oaks day.

Likewise, unbeaten Echo Zulu posted a four-length win in the Grade 1 Spinaway Stakes in her second career start on a track rated good at Saratoga Race Course. She has the top Tomlinson rating in the field, so if you liked her on a fast track, you should be pretty confident in that opinion on a wet track.

UAE Oaks Presented By Jafza winner Shahama recorded a 2 ½-length stakes win on a muddy track in Dubai in her second start, she sports a solid Tomlinson rating, and her dam was third in her lone attempt on an “off” track.

Others with a victory on a wet track are Venti Valentine, who won the Maid of the Mist Stakes by 3 ¾ lengths on a sloppy track in October 2021 in her second start; and Kathleen O., who won her career debut from off the pace on a muddy track in November 2021.

It’s reasonable to expect that – in addition to Nest – Echo Zulu, Shahama, Venti Valentine, and Kathleen O. have a good chance of excelling on an “off” track.

I’d be less optimistic about Cocktail Moments, who was 8 ¼ lengths behind Nest in the Ashland Stakes.

Nostalgic, Hidden Connection, Goddess of Fire, Yuugiri, Desert Dawn, Candy Raid, Turnerloose, and Beguine have never competed in a race on an “off” track. Obviously, that adds an element of unpredictability to handicapping a Kentucky Oaks that seems destined to be held on a muddy or sloppy surface. Some of them might love a wet track, while others might hate it. I was able to gloss a few pieces of information from looking at the race records of the dams of this group.

Candy Raid’s dam was 2-for-3 on off tracks and Desert Dawn’s dam posted an 8 ¾-length win in her only start on an off (good) track.

Goddess of Fire’s dam finished second by a nose on a track rated good in her lone start on an “off” track, while Yuugiri’s dam was a turf horse who ran second and third in two dirt starts, both on wet main tracks.

Nostalgic’s dam posted one runner-up finish in her only start on an “off” (in this case muddy) track, while Beguine’s dam finished third in the slop in two tries on wet tracks.

Here’s hoping some of this information was useful in handicapping the 2022 Kentucky Oaks. Leave Nest off your tickets at your own peril if the main track at Churchill is wet at 5:51 p.m. ET on May 6, and good luck betting the race!