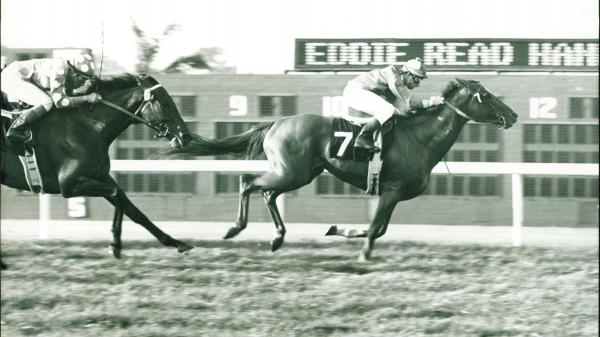 Once upon a time, not all that many years ago, there was a Thoroughbred racehorse named Wickerr who called California his home.

Much like the fabled Goldilocks, Wickerr was a picky individual with clear-cut preferences. But whereas Goldilocks could verbally communicate her disdain for poorly made porridge or uncomfortable beds, Wickerr – being a horse – could only communicate his preferences with visual demonstrations. We’re left to imagine his reasoning.

For example, Wickerr had no great fondness for Santa Anita Park, long the flagship track on the Southern California circuit. We can only speculate that he didn’t appreciate the mountain air. Hollywood Park a few miles away wasn’t any better – maybe he had a premonition the track would get turned into a football stadium and had no interest in making his reputation there.

But the seaside track at Del Mar was “just right” for Wickerr, and “Where the Turf Meets the Surf” is where he found his favorite footing. Time after time, year after year, Wickerr would arrive at Del Mar for the annual summer meet and come away with a victory or two. Dirt or turf, it didn’t matter; by the time Wickerr retired, he had recorded seven career wins at Del Mar, including four stakes races.

The early days of Wickerr’s racing career were thoroughly unremarkable. Unraced as a juvenile, he won a couple of minor races as a 3-year-old in 1978 (including one at Del Mar), but soon fell into an 11-race losing streak that saw him drop down into claiming races at Hollywood Park.

But one of these defeats – a narrow loss in a $40,000 claiming race on turf – caught the eye of future Hall of Fame trainer Bobby Frankel.

“Since he only got beat a nose, he looked like he might make a nice grass horse,” recalled Frankel in the Aug. 16, 1982 edition of the Los Angeles Times. “The next time he ran, for $50,000, I claimed him [on behalf of businessman Edmund Gann], but he came out of the race lame, and it was six months before I was able to run him.”

The break from racing seemed to do Wickerr some good, and slowly but surely the gelding began to improve his form through a series of decent (though usually losing) efforts in allowance races at Santa Anita.

It was then, in the spring of 1980, that Frankel made the fateful decision to rest Wickerr for a while and point to the Del Mar summer meet. When Wickerr returned to action, he was a different horse.

In the span of little more than a month, Wickerr competed four times at Del Mar. A runner-up effort in an allowance race marked an improvement from his pre-layoff form, and three weeks later he prevailed in a similar race, recording just his second victory in two years.

Striking while the iron was hot, Frankel wheeled Wickerr back one week later in a division of the Chula Vista Handicap. The short rest and jump in class made no difference to Wickerr, who battled gamely to finish second by a length in his stakes debut. For good measure, he packed one more start into the meet, coming back a week later to win an allowance race.

Wickerr returned better than ever in 1981. Frankel’s patience was paying off – at the age of six, Wickerr was just finding his best stride. The gelding was feeling so good that he even consented to win a couple of races at Hollywood Park during the spring, scoring his first stakes victory in the Caballero Handicap.

If Wickerr had risen to the point where he could win a stakes race at Hollywood Park, there was no telling what he might accomplish over his favorite footing at Del Mar. Perhaps with this in mind, Frankel chose to shoot for the moon, entering Wickerr in the Grade 3 Eddie Read Handicap over the Del Mar turf course. The result? Wickerr set a slow pace and kicked away down the homestretch to post a one-length upset victory. The Bart, future runner-up in the inaugural Arlington Million a few weeks later, finished fourth.

“I may have made better claims,” Frankel said in the Aug. 17, 1981 edition of the Los Angeles Times, “but this horse is certainly one of the best.”

The claim would look even better later in the meet when Wickerr switched back to dirt for the Grade 2 Del Mar Handicap and rallied to trounce his rivals by 3 ½ lengths in the quick time of 1:57 2/5 for a distance 120 feet short of 1 ¼ miles.

“Wickerr undoubtedly clinched ‘Horse of the Meeting’ honors with his second win in as many races at the seaside track and left observers wondering how he would have fared in last week’s Arlington Million in Chicago,” wrote Bion Abbott in the Los Angeles Times of Sept. 8, 1981.

Over the next 11 months, Wickerr reiterated his disdain for tracks not named Del Mar by finishing no better than third in eight straight races, the majority of them graded stakes events. But like clockwork, his return to Del Mar in the summer of 1982 seemed to rejuvenate the aging 7-year-old.

“There must be something about the ocean breezes at Del Mar that revitalizes [Wickerr],” opined Bill Christine in the Aug. 5, 1982 edition of the Los Angeles Times. How else would one explain Wickerr promptly reversing his losing streak with a 1 ½-length triumph in Del Mar’s San Diego Handicap? Two weeks later, Wickerr put a flourish on his summer season with a repeat victory in the Eddie Read, in which he rallied tenaciously between horses to battle heavy favorite Perrault into third place.

A surprising fifth-place finish while attempting to defend his title in the Del Mar Handicap signaled that Wickerr’s career was winding down, and following a couple of defeats at Santa Anita and Hollywood Park, he retired with an overall record of 11 wins, 10 seconds, and five thirds, plus earnings of $588,940.

But it was Wickerr’s record at Del Mar – seven wins, two seconds, and earnings in excess of $340,000 – that made him a local legend. Today, Del Mar honors his memory by annually hosting the Wickerr Stakes on the turf course he so clearly relished.

No one would ever mistake Wickerr for a racing superstar. He was never a champion, he never won a Grade 1 race, and he lost more often than he won.

But among the dozens of graded stakes-winning horses campaigned by Frankel during his Hall of Fame career, Wickerr always ranked as “one of Frankel’s favorite horses,” per Bob Mieszerski in the Los Angeles Times of Sept. 1, 2000. The former claimer was one of Frankel’s first stars, and the legendary trainer never forgot the gutsy gelding with a clear-cut preference for the seaside weather where the turf meets the surf.