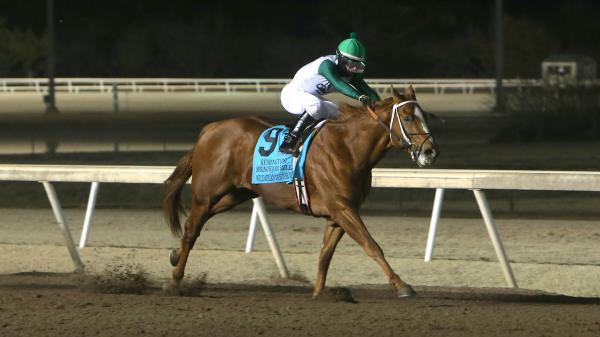 For the third time in the past five years, a locally-based horse took on all shippers from around the country and got the best of them. It was the first time in this race’s 22 years that an Iowa-bred had won. It also was the first time Ashford had entered a horse in the Springboard Mile and the first time that jockey Leandro Goncalves had ridden in the race.

Ashford, a 51-year-old trainer from Carlsbad, N.M. who lives in Moore, Okla., had this 3-year-old son of Stormy Atlantic, out of the Big Brown mare Imsortaspecial, wound up and ready to fire. The break from the starting gate was the first good omen for Wildatlanticstorm as 4-5 favorite Giant Mischief  from trainer Brad Cox’s barn, a shipper from Kentucky, lunged at the start, spotting the field a couple of lengths. Wildatlanticstorm, under Goncalves, settled in third in the early going and the jockey kept him out of harm’s way down on the inside rail.

“I just sat between horses as we hit the backstretch. Coming up the rail, I knew we were loaded,” Goncalves said. “The last sixteenth of a mile I was kind of scared because he looked at the lights, but I could feel I had more left.”

It’s a good thing, too, because jockey Florent Geroux, aboard Giant Mischief was making up every bit of ground he had lost at the start. In the end, Wildatlanticstorm held off the favorite by 1 1/4 lengths. It was the 18th time in 22 years that the favorite in the race had been beaten. It was also the fifth time in the past 10 years that the winner had prepped at Remington Park. Wildatlanticstorm came into the Springboard off a win in the $100,000 Clever Trevor Stakes Oct. 28 at Remington.

Wildatlanticstorm covered the one mile in 1:38.24 on a fast track after chasing fractions set by Echo Again and American Outlaw of :23.89 for the first quarter-mile, :47.14 for the half-mile, and 1:12.07 for three-quarters of a mile.

Owner Jim Jorgensen, who also bred the winner, earned $240,000 for Wildatlanticstorm’s victory and his horse improved his record in six starts to four wins and two seconds with purse earnings of $366,568.

Wildatlanticstorm raced on the bleeder medication Lasix, so he didn’t earn any Kentucky Derby points, but Ashford said that was the plan.

“We were going to see how he did in this race and if he showed he was good enough, we will have to take him off [Lasix] down the road in other Kentucky Derby point races,” said Ashford.

The Steve Asmussen trainee, Echo Again (9-5), earned three Kentucky Derby points for finishing third, three lengths back of Giant Mischief in second. Gunflash (20.40-1), from the meet’s top trainer, Karl Broberg, earned two points for fourth and Campfire Creed (12-1)  got one point from the Danny Pish barn for fifth. They were the only three horses that raced without Lasix.

“We are really tired right now; we saw that five-horse coming [Giant Mischief], and I got really nervous,” said Ashford. “We will rest a couple of days and then make a game plan for him.”

Wildatlanticstorm paid $32 to win, $7.40 to place, and $4 to show. He is the first foal for his dam, Imsortaspecial. The winner became only the fourth chestnut to win the Springboard Mile and he is the big red horse in the barn.

2022-12-19
Previous Post: Rank Group Recovery Slows Down as UK Market Shrinks
Next Post: “There are operators considering taking the situation of sports betting in Brazil to court”