The first witnesses took the stand in the Suzie Zhao murder trial, with accused Jeffrey Bernard Morris present in a Michigan court as the prosecution began their case, with forensic evidence to the fore…

From workmen to a park ranger, a forensic investigator to a pathologist, from a gas station owner to a store security expert, along with police and friends of both the victim and the defendant, Skrzynski called them all to support the state’s case against Morris.

First to take the stand were the passing workmen who found Susie’s charred and bloodstained body in a Pontiac Lake Recreation Park parking lot.

“It looked like a burnt body, a burnt manikin…” was how Ronald Joseph Grueneveld described finding what turned out to be Susie’s body, in the early hours of July 13th 2020.

The prosecution contends that Morris murdered Susie in the parking lot during the commission of an extreme sexual assault, described yesterday by Mr Skrzynski as Morris’s “pornographic fantasies come true”.

Morris then “burned her alive,” claim the prosecution, with the 63-year-old defendant charged with first-degree premeditated murder and felony murder.

The main evidence given in the court’s morning session came from forensic pathologist, Dr. Andrew Hanosh, who testified that Susie was still alive when she was doused in gasoline and set on fire.

Mr Hanosh also testified to the horrific injuries sustained by Susie during the sexual assault, involving blunt force trauma to the genital area, which the prosecution will claim matches Morris’s internet searches for extreme sexual practices.

The court was repeatedly shown disturbing images of Susie after death, her body burned almost beyond recognition and covered in blood.

Gas station owner Bassam Alkasmikha also took to the stand to testify that Morris bought one litre of gasoline in a 1 litre gas can from his store on July 12th, claiming that the defendant had only $20 to his name and paid with cash.

The gas can allegedly purchased by Morris is said to match the molten remains of one found next to Susie Zhao’s body, her body having been doused and set alight.

Defence attorney Michael McCarthy, who doesn’t plan to bring any witnesses of his own in Morris’ defence, proved rather hostile to the witness’s recollection of events, pulling him up several times over specific dates and memories of meeting the defendant.

The prosecution, who plan to call 17 witnesses in total, continued in the afternoon by calling asset protection specialist, Keith Hawkes.

The loss prevention expert explained how Morris was caught on CCTV entering and leaving a Meijer grocery store on July 12th, just before midnight on the night of Susie’s death.

Morris is alleged to have shoplifted zip ties (also known as cable ties) and used them to bind Susie’s wrists. The store’s brand of zip ties are said to match those later found on her body. He is also alleged to have taken a jar of vaseline during his time in the store.

Under cross examination, Mr Hawkes was grilled on inventory methods and possible discrepancies in missing or miscounted cable ties and petroleum jelly.

Sgt. Joseph Marougi was next to take the witness stand, quizzed on the initial police investigation and was followed by forensic scientist Jessica Drager, who testified that DNA samples taken from Suzie Zhao’s vagina matched that of Jeffrey Bernard Morris. 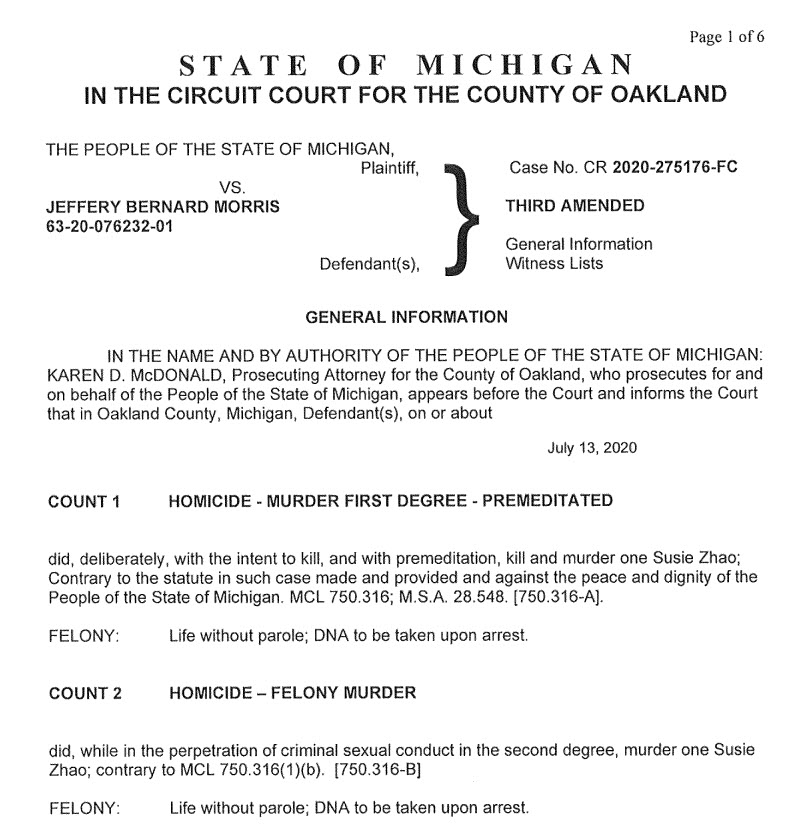 Michelle Lagrou, a friend of Susie’s for some 20 years, took the stand next and explained she had only become aware of Susie’s schizophrenia diagnosis after her death. On the day of July 12th, Ms Lagrou became worried about Susie’s behaviour during a trip and left her at a gas station.

The court heard that Susie was then picked up by her mother, Dai Fang, and her mother’s husband, and taken home, but left their home again later that evening. It was the last time her mother saw her alive.

Next to testify was Matthew Pohl, a long-time friend of Jeffrey Morris, who was visited on the evening of July 12th by Morris, who “wanted to borrow money for a hotel room” from Mr Pohl.

Mr Pohl stated that someone matching the description of Susie was in Morris’s car, and that he loaned Mr Morris $60.

White Lake Detective Steve Moore was then called, out of sequence, by defence lawyer, Mr McCarthy, who took the courtroom back to gas station owner Mr Alkasmikha’s testimony.

Then it was the prosecutor’s turn to call Detective Moore to the stand, a confusing moment for those watching, and it appears that Mr McCarthy’s defence may rely on discrepancies in this area of testimony.

Morris himself is not expected to testify and faces life sentences without parole on each of the two murder charges.
The trial continues today, Wednesday October 5th, and PokerTube will be reporting updates on a daily basis.