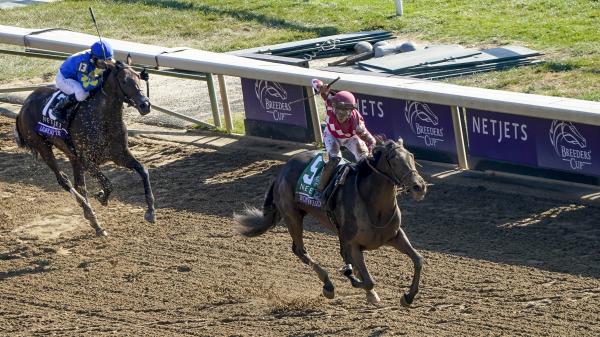 All summer long, at Saratoga Race Course, Hall of Fame trainer Mark Casse talked about a young filly named Wonder Wheel whenever he could. If you listened to Casse’s Wonder Wheel spiel long enough as summer slowly turned to fall, you would swear this 2-year-old baby was about to become the second coming of Ruffian.

On a glorious Nov. 4 afternoon that felt more like the first Friday of July than the first one in November, Casse could breathe easy.

All the stumping he did for the daughter of Into Mischief climaxed with a rousing victory in the $2 million NetJets Breeders’ Cup Juvenile Fillies at Keeneland.

Ridden by Tyler Gaffalione — who won his first Breeders’ Cup race in his 35th career start — Wonder Wheel came from behind to win by three lengths.

She has now won four of five career starts.

“Absolutely,” Casse said when asked if he put himself out on a limb after those summer sermons. “I kind of put a little pressure on myself. There was a few times when I said, ‘now why did I do that?’ You know me. I tell you the way I feel. And that’s the way I felt. I wasn’t holding anything back.”

Casse was compelled to sing the Wonder Wheel song as soon as the young horse came into his barn. The way she trained, the way she carried herself, the way she stood in her stall was just something special.

In the 1 1/16-mile Juvenile Fillies, Wonder Wheel had to show Casse a new dimension to her repertoire. She had won the Darley Alcibiades Stakes at Keeneland on Oct. 7 going gate-to-wire.

On Friday, Wonder Wheel and Gaffalione did not secure good early position and found themselves 11th in the 13-horse field for much of the race. But, when the real running had to start, Wonder Wheel found her gear approaching the far turn.

“When this filly broke and everyone else kind of went in front of her, I was very concerned,” said Jon Green, who operates D. J. Stable, the winning owner, with his father, Leonard.

Not to worry. Casse shared a bit of the same concern, but he knew how good this filly was, and he stayed somewhat confident. And then the horse and the rider got the job done.—Tim Wilkin

The victory closed out a big day for a Coolmore operation that claimed two of the three turf races on the “Future Stars Friday” card as Tabor, Derrick Smith, and Susan Magnier’s Meditate captured the Breeders’ Cup Juvenile Fillies Turf earlier in the day before Westerberg, Susan Magnier, and Tabor’s Victoria Road prevailed by a nose over Godolphin’s Silver Knott after a stretch duel that saw the lead change hands a couple of times.

That final margin provided bragging rights for Coolmore on a day that European-trained horses would sweep the three grass races. Godolphin’s Mischief Magic delivered a stirring run in the Breeders’ Cup Juvenile Turf Sprint, which opened the day’s World Championships races. Mediate’s score set-up the day’s rubber match for bragging rights of the top international racing owners. Neither would receive a quick answer.

Longshot Mo Stash, who tracked early leader Curly Larry and Mo from second through a half-mile in :48.29 and six furlongs in 1:13.04, seized the lead in the stretch but would yield to the two late international runners. Silver Knott, who saved ground throughout under William Buick, would slip through tight quarters along the fence in midstretch to briefly seize the lead. But Victoria Road, under Ryan Moore, had split foes three wide in upper stretch and surged on the outside to pass Silver Knott.

But Silver Knott fired right back before Victoria Road found something deep down in a final winning surge.

“There wasn’t much room but there was enough of a gap and my horse showed a really good attitude and he quickened and he got through,” Moore said. “I think when he [made that move to the lead], he shut down a little bit and just drifted out into the middle of the track slightly. He left the door open for the runner-up.

“But my horse did respond or maybe the other horse peeked on his run slightly. But I thought in the lane he had won.”—Frank Angst

Owned by longtime partners Susan Magnier, Michael Tabor, and Derrick Smith along with Westerberg, Meditate had never been tested beyond seven furlongs, so the one-mile Juvenile Fillies Turf didn’t seem an obvious target.

“Speaking to Michael the last week or 10 days, we were thinking of bringing the filly called Never Ending Story, a filly that ran in France,” said trainer Aidan O’Brien, referring to a daughter Dubawi who placed in the about one-mile Qatar Prix Marcel Boussac Criterium des Pouliches. “Michael [Tabor] just thought that maybe this race would suit this filly better.

“We gave her every chance since Newmarket not to come here, but she kept passing all the tests,” O’Brien continued. “She was doing everything right.”

Another factor in bringing Meditate to the Breeders’ Cup World Championships is her dam, a winning daughter of Dalakhani, who won the 2003 Prix de l’Arc de Triomphe Lucien Barriere and Prix du Jockey Club-French Derby — both at 1 1/2 miles. Such a strong stamina influence was beneficial to stretching out the speed Meditate has already shown through her sire No Nay Never. A son of Scat Daddy, No Nay Never won Darley Prix Morny at 2 going six furlongs. At 3, he won the 2014 Woodford Stakes Presented by Keeneland Select at 5 1/2 furlongs and was second in the Breeders’ Cup Turf Sprint at 6 1/2 furlongs.

“No Nay Never is a speed influence and we have the highest quality 2-year-olds by him this year, so want to see if they can stay farther than five, six, or seven [furlongs]. We were looking to find out if No Nay Never [runners] out of stamina mares will stay and we found out they can get the mile,” O’Brien said. “[Horses by No Nay Never] have great minds and good personalities and are very exciting horses, really. Seeing this filly do it over a mile even makes them more exciting.”—Eric Mitchell

A Breeders’ Cup change in venue from Del Mar in 2021 to Keeneland this year did nothing to change the initial winning results for the team of jockey William Buick, trainer Charlie Appleby, and owner-breeder Godolphin.

The victory by the Exceed And Excel colt was the first by a European-trained horse in the race, which was upgraded to top-tier graded status this year after being a Grade 2 the past three years. It was run initially in 2018 as a listed race.

None ran better than Mischief Magic, who after a tardy start, rallied up the inside on the turn, angled out for room, and after finding an opening, passed four horses in the final furlong to score a decisive victory.—Byron King