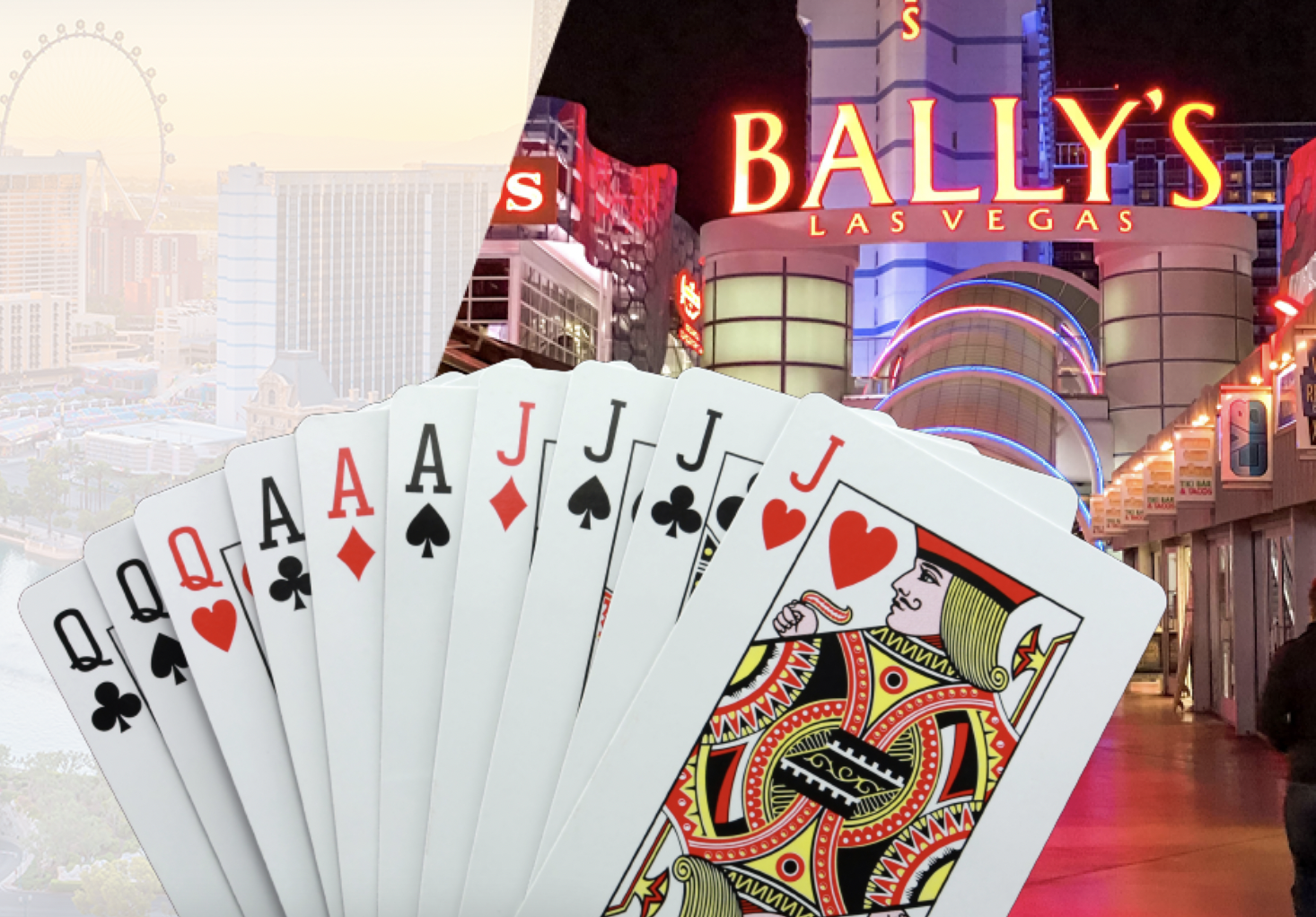 The World Series of Gin Rummy returns to the Las Vegas Strip Thursday with its Holiday Classic, which will bring a couple dozen of the world’s best card players to Bally’s to make a run at a victory.

The World Series of Gin Rummy returns to Bally’s from November 3-6. (Image: WSOGR)

Owned by Californian business entrepreneur Mario Delis, the World Series of Gin Rummy (WSOGR) has been around since 2000. Delis, 44, bought the WSOGR from John and Lily Hainline right as COVID-19 shut everything down. John happens to be one of the best gin rummy players to ever live. He and Lily founded the Gin Rummy Association 23 years ago, which the WSOGR is under.

“(Hainline) is the greatest gin player of all time. I’m not just saying that, it’s the actual truth,” Delis said. “He’s won more gin tournaments than anybody else in the world times like five.”

Delis restarted the WSOGR this summer, which took place during the World Series of Poker, and plans to resurrect his favorite card game through the website and with the help of a social media marketing company.  It’s a tall task because despite being one of the most complex and intellectually deep card games out there, poker remains king.

Delis says the average age of its players is in the upper 60s. Consequentially, “in the 60s” also describes the number of players who usually show for the events. This summer, 65 players played in the single’s event.

Delis, a farm worker broker from Bakersfield and owner of the large marijuana growing, distribution, delivery, and processing company 420 Kingdom, is also a poker player and action golfer.

“The way I learned gin is the same way I hear nine out of 10 people learned it: My grandma taught me,” he said.

He started playing in tournaments when he was 32 and is still one of the youngest players at the events.

As a former professional poker player, Delis has a good feel for what drives poker players and gamblers, and hopes to discover the potion to attract more of these players to the game he loves.  “I haven’t figured that out yet. You definitely get some poker players at the gin tournament, it’s just not as many as I thought you’d get,” he said.

Four players who saw his WSOGR banner hanging at the WSOP this summer did find their way into the gin rummy event at Bally’s, but Delis is slightly befuddled as to why more aren’t showing up.

“They’re gamblers, they like cards, they like competition,” he said. “And they think they’re the smartest people in the world.”

Lily Hainline, who has been part of the gin world since she met John at a casino in the 1980s, observes that a lot of it is a matter of class. “The gin players come from the country club group,” she said. “It’s a different feel than the poker. You look at the registration line in poker and it looks like a demolition derby. It’s just a different society.” 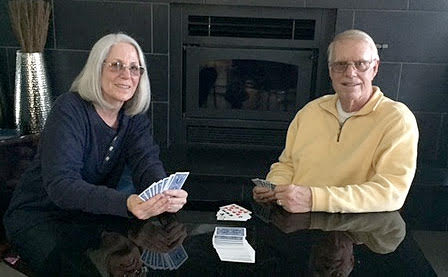 Fire in his belly

Demolition derby could possibly be used to describe Hainline’s personality while he was traveling the country as a golf hustler in the 1950s and 60s.  Describing himself as a long-ball hitter with a temper, the tall redhead from Topeka sometimes would scare marks away with his intensity and demeanor (with a slight emphasis on ‘mean’).

But a rainy day in 1961 changed his life. He was playing a PGA Tour qualifying event at the Colonial Country Club in Fort Worth when he saw two older gentlemen waiting out the storm with gin rummy. They offered to teach him the game with more than a billion starting hands, and the golf hustler was immediately hooked.

At this point in his life, Hainline had lost his golf backers “because they said I was an idiot when I was playing golf — I was a redhead, I had a temper.” He spent about six years hustling golf at just “about every course west of the Mississippi,” finding gin games against the country club set as he went along.

Hainline turned his competitive instincts toward studying gin by dealing himself thousands of hands, eventually developing a method that has rarely failed him in matches all over the world. His success is undeniable.

From 1985 to 2000, he played in 72 tourneys, winning 21 of them and finishing as runner-up in 15, he said. Hainline earned enough money playing gin to help build a greeting card distribution with Lily in San Fransisco that grew to 250 stores.

Now in his 80s, Hainline teaches his gin method for $250 an hour. Some of his students play nose-bleed stakes where they could win or lose upwards of $50K a day, so the lessons often pay for themselves.

For others, not so much.

One of Hainline’s students, a lawyer from Los Angeles, took eight hours of instruction at John and Lily’s Palm Desert, California home (the student plays Lily, and John coaches). She called him a few weeks after the lesson to happily report that she was now beating her friends.

At the fringes of pop culture stands Stu Ungar, the troubled yet brilliant card player who cut his life short by following a 50-mile-long line of cocaine into his final hotel room at the Oasis in 1998. A five-time WSOP bracelet winner, Ungar was also known as a fantastic gin rummy player. This is romanticized in the 2003 movie “High Roller: The Stu Ungar Story,” and elsewhere.

But Ungar wasn’t as good as John Hainline.

“Have you ever heard of Stuey Ungar?” John said, early in the conversation. “Well, I played him a few times and I beat him. He wasn’t a nice guy.”

Hainline called Ungar a great memory player who needed help with strategy, particularly toward the end of hands. “He had a photographic memory, but he still wasn’t a good decision player,” Hainline said.

Ungar once showed off his total recall during one of the eight times he and Hainline faced off. They were playing with a “turn deck” — a separate deck used when playing Oklahoma to determine the knock value. After 51 deals, there was only one card left on the table.

Ungar knew it was the 5♦. Then he turned the deck over, and like a magician, began pulling cards out and correctly naming them.

It was something he was known to do. According to the WSOP, in 1997, Ungar named the last two cards in a six-deck blackjack shoe, winning $100K from casino owner Bob Stupak.

The Gin Rummy Association counts about 1,000 people as members. There’s no criteria to join and sign-up is free. The organization keeps track of tourney results, ranks players, and has awarded a Player of the Year since 2000.

Members receive mailers notifying them of upcoming events, and Delis will soon expand its social network presence by contracting with a company that specializes in that sort of stuff.

The Holiday Classic starts at noon PT Thursday with its $500 per person partnership team event. At 10 a.m. Friday, the two-day $1,000 singles event will begin. In the singles event, players advance to the finals by winning 10 games before they lose seven.

A freeroll will take place on Sunday, also at 10 a.m.

For more information, or to become a GRA member, click here.

1. ‘The Return’ Brings Big Buy-In Poker Tourneys Back to Borgata in January