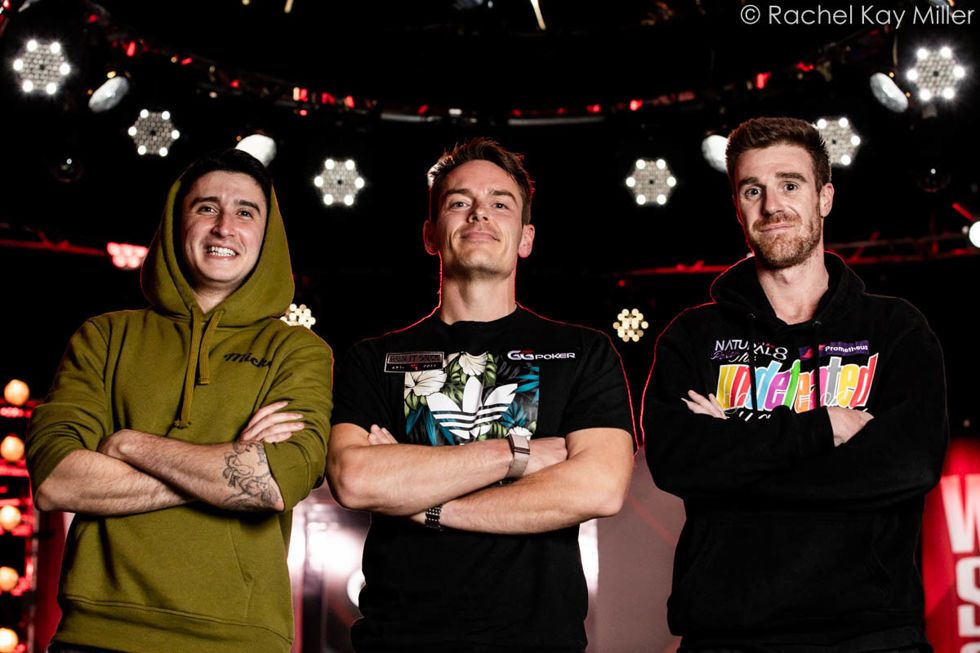 World Series of Poker Main Event Down to the Final 3

The World Series of Poker Main Event is down to the last three players.

Day 8 started with 10 players because Day 7, which took place Wednesday, went for nearly 17 hours. They had Thursday off before returning to the Paris on the Strip, 12 days after the Main Event started.

Doyle Brunson, who skipped the entire Series because of COVID-19, kicked off play via a pre-recorded video congratulating the players and giving the “shuffle up and deal” announcement.

A grind to the end

Asher Conniff, who only had 15 blinds, was the first to go when his pocket tens lost a race to Dueks’ AK. He not only lost, but was obliterated by a flop of all kings. He won $675,000 and the official final table of nine was finally made.

Next to go was Mathew Su, who started the day as co-chip leader with Jorstad, but lost a series of all-ins to shorter stacks until he ran his pocket eights into Philippe Souki’s pocket kings. The cash specialist simply couldn’t win a race at the final table and took $850,675 for ninth.

Souki, who came into the final table with 11 big blinds, managed to stay alive for about seven hours of play until his pocket aces were cracked by Matija Dobric’s QJ. To make it worse, Souki hit a set on the flop only to have the river destroy his WSOP Main Event dreams via a straight. He won $$1,075,000 for eighth.

Aaron Duczak was next to go after running AK into John Eames’ pocket aces, which decimated his stack. He got bounced one hand later against Duek. The amateur who owns a lumbering company that removes dangerous trees, won $1,350,000 for seventh. 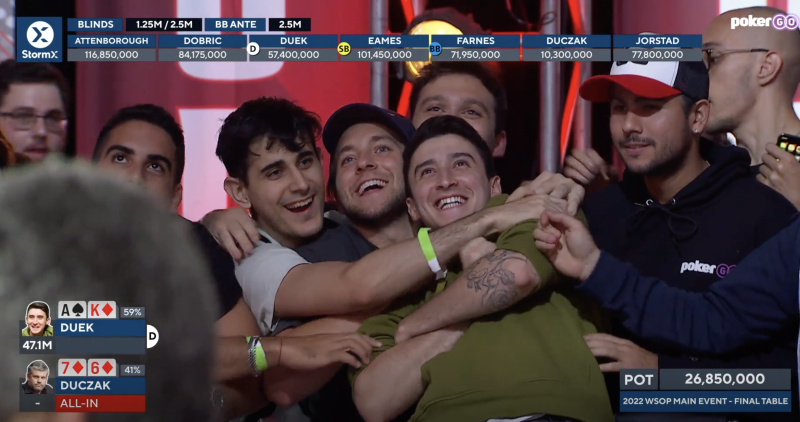 Michael Duek’s, the youngest player at 23, gets love and support from his rail. (Image: PokerGO).

Day 6 chip leader Jeffrey Farnes was eliminated in sixth after being cold-decked at the final table. He eventually shoved with pocket twos on a nine-paired flop, and he was good against Eames, who held a gut shot straight-draw and overs. But the turn and river ran out treys to counterfeit Farnes’ two pair.

Jorstad was responsible for ending the day after almost 10 hours of play when he took out Eames with pocket kings against AJ. Eames, whose rail spent the night holding their shoes in the air while partying, earned $3 million for fourth.

2022-07-17
Previous Post: Uplatform shortlisted under two categories at SBC Awards
Next Post: Gauselmann on Its Way to a Full Post-pandemic Recovery