A stunt involving a WSOP masseuse and known prankster Frank “The Tank” Stepuchin has backfired, causing one person to lose their job.

In a tweet that’s subsequently been taken down, Stepuchin was shown getting a massage at a WSOP table. Players getting massages isn’t uncommon. However, the issue for at least one person was the fact Stepuchin was topless, and that the masseuse was touching his nipples.

Stepuchin and the masseuse in question, Cintia Amstalden, have both said it was a stunt. Stepuchin has a reputation within the poker community for being a joker and he orchestrated the scene. However, after the video appeared online, Amstalden was told her services were no longer required.

CardsChat spoke to Amstalden to get her side of the story. She confirmed that Stepuchin asked her to participate in the stunt in which he ordered two beers and undid the buttons on his shirt. He then asked her to massage his chest.

Another player at the table was asked to record the stunt and did so willingly. Once it was over, Amstalden said that everyone laughed, and one player told her she was a “good sport” for indulging Stepuchin’s request.

I knew it was a joke. Not sure why others didnt pick up on that. People need to lighten up!

Las Vegas resident and WPT titleholder Stepuchin confirmed this version of events via his Twitter account. He apologized for asking Amstalden to touch his nipples and stressed that there wasn’t anything sexual in it.

One person who didn’t see it as a “complete joke” was Farah Galfond. The poker player and wife of Phil Galfond criticized the stunt. Her tweet has since been removed, but a screenshot given to CardsChat shows her calling it “utterly disgusting” and something that probably made everyone at the table feel “uncomfortable.”

She also likened the massage to a sexual act and called for Stepuchin to be banned from the WSOP, and for Amstalden to be fired. The WSOP and its vice president, Jack Effel, were tagged in the tweet visible to Galfond’s 42,500 followers. 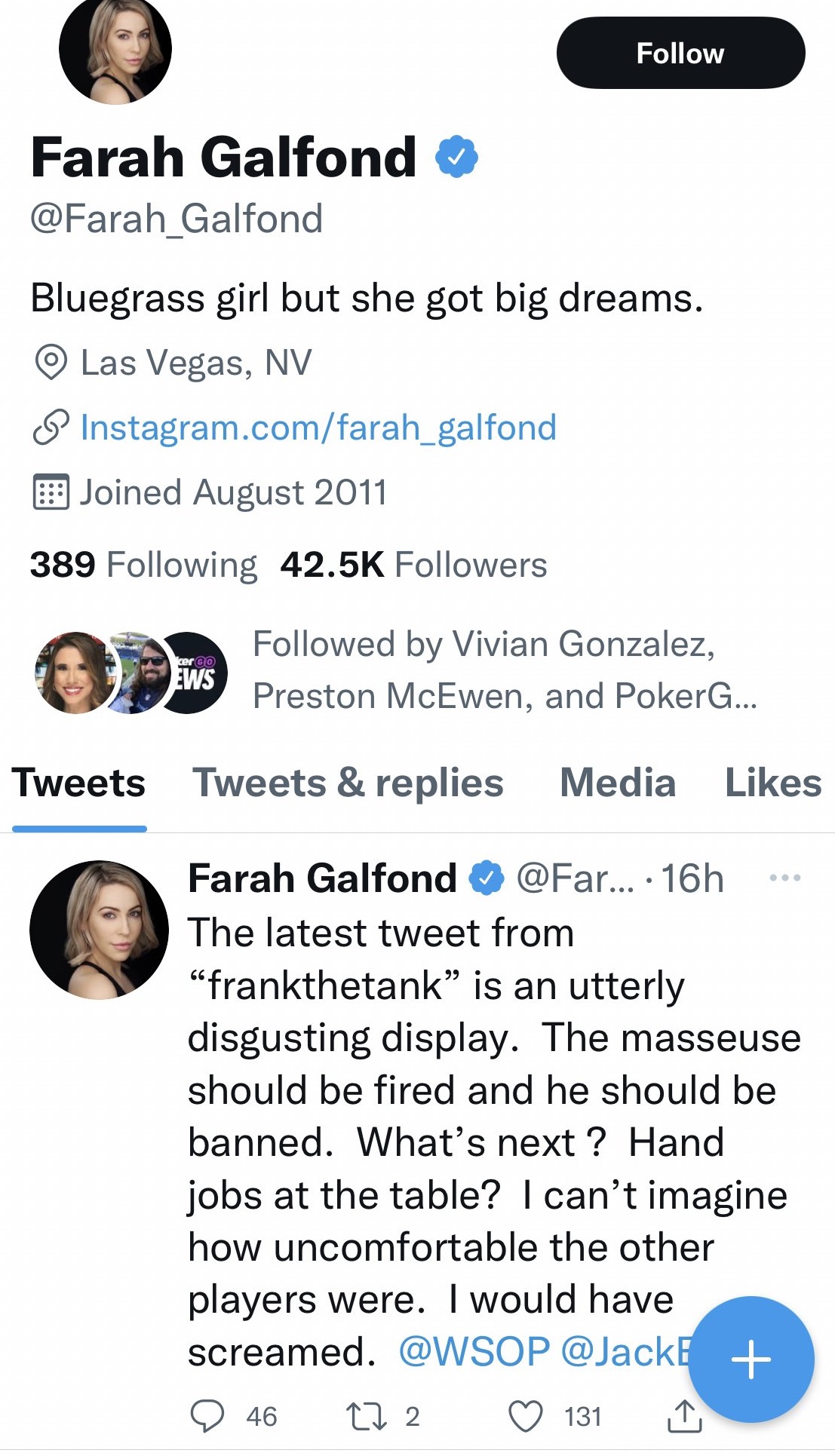 Amstalden was a subcontractor for Professional Massage Inc (PMI), a Las Vegas-based company that provides masseuses for events, including the WSOP. Although PMI wasn’t tagged in Galfond’s tweet, Amstalden told CardsChat that her bosses saw comments about the incident online.

They didn’t specify which tweets they looked at. However, Amstalden said that she was told to “pack her bags and go home” because the stunt reflects badly on the company. Amstalden has asked for a second chance, but her boss hasn’t responded.

CardsChat reached out to Professional Massage Inc for a comment but didn’t receive a reply at the time of writing.

Massage goes from smooth to rough as tensions rise

Amstalden told us that she is sorry for any damage her participation may have caused to her employer. However, she also believes it was the comments from Galfond that pushed PMI into making a move.

Her contention is that the phrasing of Galfond’s tweet made it sound like she was performing a sexual act on Stepuchin. This misrepresentation of what happened caused a negative reaction which, Amstalden believes, led to her being fired.

“This [tweet] took things out of proportion by insinuating that it was prostitution. It was made to sound like [the stunt] was a real sex act,” Amstalden told CardsChat.

Amstalden went on to say that she can take criticism from people about the stunt, but she can’t take someone “twisting” the narrative to damage her reputation.

CardsChat reached out to Farah Galfond for comment comment but didn’t receive a reply at the time of writing. However, Galfond has since tweeted that, while she found the incident gross, firing Amstalden is unfair. Galfond has also said she will talk to the massage company and try her best to get Amstalden reinstated, even if she doesn’t know if her influence will help.

there were no repercussions for Frank. Only the masseuse. Which is very unfair. With all the recent discussions on how to make more women comfortable at the tables, this video to me, was an abomination. It takes a lot to offend me. A LOT. I’ve played in private home games

Stepuchin has also called for Amstalden to be reinstated, as have other poker players.

Lastly please please do not fire Cintia for this incident. I accept all the blame and if any action needs to be taken please place it on me. Sincerely Frank

Meanwhile, some on Twitter have criticized Stepuchin for the stunt, and for involving someone working at the WSOP.

This is why we have problems getting women in poker. To you it was a joke to her it’s her livelihood that’s just gone down the pan. Sorry Frank but you’re definitely the one to blame for this one. Clothes should be kept on when playing at the table I get the joke but it backfired

The incident has caused Amstalden “severe emotional distress.” The mother of two said that the whole ordeal has ruined her reputation and left her in a tough spot financially after two years of COVID restrictions

2022-06-07
Previous Post: Thoroughbred Makeover Diary: The Process Vital on Path to Win With Odin
Next Post: Traveling Through the Canadian Rockies – Part I of II