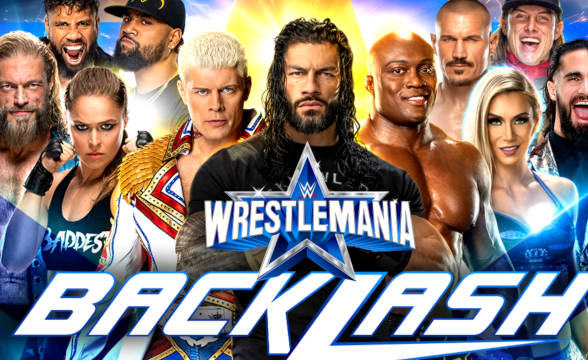 After a great success the company had with WWE WrestleMania 38, Vince McMahon & Co. are hoping to achieve something similar with WrestleMania Backlash.

The event is scheduled for Sunday, May 8, and we’re now going to analyze it from a betting perspective. We’re going to dissect the odds, analyze main favorites, and share some picks.

The last time these two met, Rousey was seen as a huge favorite to win the SmackDown Women’s Championship. However, Flair defended her title.

The rematch, however, should go the other way. It’s just that Rousey is too big of a star to say “I Quit” on the WWE.

An important thing to keep in mind is that there’s nothing at stake in this match. That said, a win for McIntyre and RK-Bro could serve as a device to set up a mega-match between Reigns and McIntyre one-on-one in the future.

Oddsmakers seem to agree with this prediction, which is why they’ve made Drew McIntyre & RK-Bro the favorites at -190.

Some think Omos could be the next big thing in professional wrestling. One thing going in favor of that claim is that he’s going a new manager in MVP. If he is going to turn into a WWB superstar, the obvious scenario is that he’s going to win against Bobby Lashley on Sunday.

Cody Rhodes is seen as the underdog in the clash with Seth “Freakin” Rollins, which may come as a surprise to WWE fans. The thing is that Rhodes is loved by the crowd, especially following his comeback to WWE at WrestleMania 38. That said, no one should be surprised if we saw him win on Sunday.

When it comes to the AJ Styles vs Edge match, it seems the bookmakers are right. They think Styles is going to be victorious this time, just one month after losing to the same opponent at WrestleMania 38.

Finally, the match with the biggest favorite of them all is Happy Corbin vs Madcap Moss. The latter is seen as a -900 favorite. The reason? Moss is dubbed to rise to stardom in WWE and winning on Sunday is the first step in achieving that.