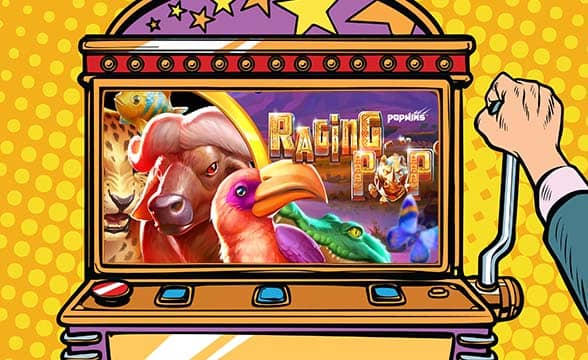 AvatarUX has launched RagingPop, a fresh slot with the majestic wildlife in the African savannah at the center. The game was developed using Yggdrasil’s popular YG Masters program, creating the ideal mix between one-of-a-kind game design and adrenaline-pumping gameplay. The slot is packed with excellent features including the PopWins mechanic, Raging Reels, a Bonus Round with 30 Free Spins, and wild symbols that attract greater wins.

Join the Raging Rhinos and Explore the Fascinating Savannah

The game has a fascinating design that captures the turmoil of the deep African savannah, with herds of Raging Golden Rhinos, lions, and other wild inhabitants roaming around. Players are invited to try their luck by exploring the multi-stage Gamble mode which allows them to gamble several times for higher rewards (Free Spins). Players can collect as many as 30 Free Spins. A losing bet will send players into the Bonus Round where they will receive a smaller number of free spins. When using the MAX Bonus Buy, players can access the maximum number of Free Spins from head start.

The game also features Raging Reels which expand all reels, giving players additional Ways to Win, along with the opportunity to come across a mighty multiplier that could multiply a single spin up to x500. The Golden Rhino is the game’s super-high symbol which can pay out with a simple combo made of only symbols instead of the standard of three symbols.

The gaming studio’s chief executive officer Nicola Longmuir called the fresh release “another exciting addition” to their portfolio that comprises spectacular games like Lollipop, PapayaPop, MonkeyPop, TikiPop, and CherryPop Deluxe. The developer that relies on its unique PopWins and MultiPop game mechanics expressed its thrill to be launching the new game across Yggdrasil’s wide range of network operators. Longmuir called the new game “another strong milestone” for the company while expressing confidence in the success of their collaborations.

On the other hand, Yggdrasil’s head of product and programs Stuart McCarthy called AvatarUX “a standout studio in its own right”, calling it “a fantastic partnership” expected to introduce global players to “innovative content.” Last week, Yggdrasil released Prized Pets Gigablox, a brand new slot with the GEM Gigablox mechanic together with Northern Lights. At the end of July, the company launched MexoMax!, a new game part of its MultiMax Series.