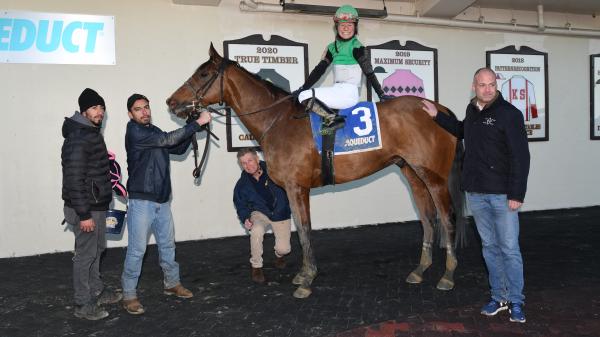 Young Jockey Olver’s Career Off to Fast Start at Aqueduct

It’s not unusual to find a young apprentice jockey in New York during the icy winter months at Aqueduct Racetrack.

What’s rare is to find one who has displayed as much promise in her initial rides as Madison Olver.

At the age of 23, the Colorado native embarked on her career as a jockey only a month ago. She has ridden in just 21 races since then and receives the standard 10-pound weight allowance to help offset the huge difference in experience between her and veterans. The learning curve is enormous, and it’s natural to expect meager results for someone with so little experience on the sport’s premier year-round circuit.

Yet in a very short time, Olver has made the difficult transition from exercise rider in eye-opening fashion.

While she has just one win from those 21 rides, she has six seconds and three thirds, putting her in the money 48% of the time, a figure rarely attached to a fledgling 10-pound apprentice, who by rule cannot have more than five career wins.

“You don’t see this kind of success for a 10-pound ‘bug’ rider,” said her agent, Joe Migliore. “As she continues to get those first experiences in a race, she’ll get even better. She’s a fast learner and a good study. She really cares and pays attention.”

While the fields and jockey colony may not be as robust at the Big A in December as they are in August at Saratoga Race Course, succeeding at any level and any time for a newcomer is never a simple task. To better understand how impressive it can be to land in the money in nearly half your rides, consider seasoned veterans Kendrick Carmouche, Hall of Famer Javier Castellano, and Dylan Davis, the three leading riders at the Aqueduct winter meet. Carmouche has been in the money 43% of the time, Castellano 45%, and Davis 46%. All three are slightly below Olver’s mark, which has been fashioned while riding 15 horses priced at 10-1 or more.

“It’s been an indescribable thrill for me. I just love it. I knew I would love being a jockey, but I didn’t know I would love it this much. I feel so lucky to be able to do this,” Olver said. “There’s a lot more adrenaline in a race than a workout. The moment you ask a horse to go and that horse responds, it’s special. There’s a much different level of excitement. To have a horse who owes you nothing do something for you just because you asked him is a pretty crazy feeling, and I love it.”

“When you look at the odds of the horses she’s been riding and how well she’s done, you know she’ll do well with more opportunities,” Migliore said. “She’s had six seconds, and a few of them were close losses. I’m very happy with her work ethic, enthusiasm, and I’m excited about her future. I think she’s a promising young rider.”

Olver’s cheery disposition was tested by frazzled nerves in her debut ride and then rewarded with the exhilaration of her first win.

After spending the last two years as an exercise rider for trainer Christophe Clement, Olver joined forces with Migliore through the help of Clement’s son and assistant trainer, Miguel, a close friend of Migliore’s.

That led to Nov. 12 in the ninth race at the Big A, when Olver rode in a race for the first time and guided the Orlando Noda-trained Flattering Gal  to a third-place finish at 31-1 odds.

“I felt weirdly calm for that race,” Olver said. “I expected the worst, and when it wasn’t the worst I was thrilled beyond belief.”

In her 15th ride, she posted a six-length victory in a two-turn, nine-furlong, $40,000 claimer aboard Curbstone and was treated to the customary dousing with water and powder that welcomes a novice to the winner’s circle for the first time.

“When I won that race, I became completely addicted to this,” Olver said. “It was like winning the Kentucky Derby.”

One of her mentors has been Richard Migliore, Joe’s father and the champion apprentice in 1981. He believes the skill set Olver used in her victory bodes well for her growth on the highly competitive New York Racing Association circuit.

“On her first winner, going around the first turn, she really looked around before she dropped in. And that seems like a small thing, but it’s not insignificant for a 10-pound apprentice to be that aware of their surroundings,” said the elder Migliore, an analyst on NYRA’s in-house and cable telecasts.

“It speaks volumes about her understanding the mental part of this game, which is harder to master than people think. She has a long way to go physically, but that will come with time and racing as she gets more fit and hones her craft. She’s very coachable. She has a lot of enthusiasm, and never doubt how far enthusiasm takes riders in this game.”

In particular, the winner of 4,450 races said he has been impressed by the way Olver has quickly adapted to the differences between exercising horses and race riding.

“Working a horse in the morning is like basic training. A race is like being on the frontline,” Migliore said. “When you can be as calm in the frontline, with bombs going off around you and things are not as controlled or contained, as you are in basic training, that’s when you become a race rider, and Maddy has already attained that.”

Olver’s enthusiasm is best reflected in the positive energy she exudes and her willingness to view each day as an opportunity to learn something important about her new profession.

“It has been slowly coming together and I feel like it will continue to slowly come together for me,” she said. “As it does, patience is important, even though as a woman in this sport I know I have to be assertive. I always had a high standard for myself, so I won’t say I am doing that well, which is maybe good because it keeps me hungry. I know there are things I need to learn. I was second with a horse who came in a bit, and if I had read him better I might have expected that, handled it, and we could have won,” said Olver, who will keep her 10-pound break in weights until she wins her fifth race and the allowance is reduced to seven pounds. “Having the support I’ve received from trainers, owners, all of the other riders, it means the world to me.”

As much as jockeys are fierce competitors on the track, Olver said fellow female riders Jacqueline Davis and her sister, Katie Davis, have been role models for her. Katie Davis is also represented by Joe Migliore, who is the agent for her husband, Trevor McCarthy, who is hoping to resume riding at the start of February from non-displaced fractures of the clavicle and pelvis.

Trainers Morley, Noda, and Oscar Barrera III have been foremost among Olver’s early backers, but that list is growing. She has four mounts on the Dec.15 Aqueduct card and three on the Dec.16 program. This weekend, if the race fills, she will also ride one of the horses Christophe Clement left in New York for the winter.

Clement has played a central role in Olver’s racetrack career.

When she graduated from high school, Olver decided to take a break before starting college and searched for a spot where she could embrace her lifelong love of riding horses. She found it in France, of all places. Having spent part of her childhood in the country, she accepted a job with trainer Gina Rarick and worked overseas for two years.

She then reached out to Clement for a job back home in the United States and was hired two years ago as an exercise rider for one of New York’s top stables.

After watching her quickly become a highly valuable exercise rider, Clement, who is 11th on the all-time earnings list, is not surprised that she has made a smooth transition to race riding.

“She has done great,” Clement said. “She’s a very good horsewoman and such a hard-working and good person. I’m delighted that things are going the right way for her. She has been dreaming about this and she is fulfilling that dream, which is wonderful. We’re going to help her as much as we can.

“I could see how good she would be from the way she breezed horses in the morning, and it’s hard to explain, but some people like Maddy get horses to run better than other people. They respond to her.”

So, as the days get colder in the Big Apple, while most New Yorkers will do their best to stay warm inside, Olver will be outside on frigid, blustery days, learning her lessons on the classroom of Aqueduct’s 1 1/8-mile oval. With success, her advantages on one level will be reduced, with the cut to a seven-pound allowance after five wins followed by a reduction to five pounds after 35 wins and an end to her apprentice status one year after the fifth win. Yet, beyond that, there will be more chances to ride. Ten-pound apprentices are not permitted to ride in 2-year-old races and turf races, or be aboard first-time starters, and the experiences she figures to gain from riding daily are priceless.

It will not be easy, and early success does not guarantee future success, but Madison Olver seems clearly determined to make the steady progress that will establish her as a favorite with a larger cast of owners and trainers, not to mention handicappers looking for interesting longshots.

“There are so many good riders in New York and they are all hard workers,” she said. “It’s hard to keep up with them, but I know I have to work hard to show people how capable I am and that I am physically strong enough, and I’m very willing to do it.”