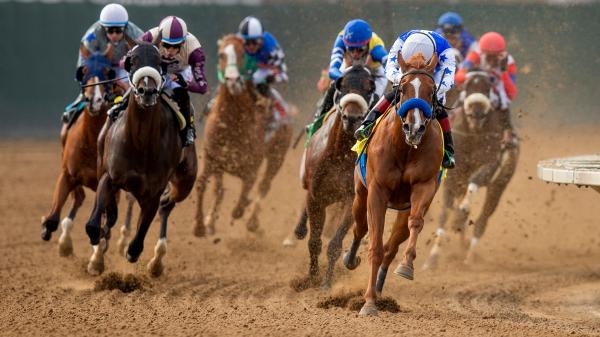 As much as the main focus of attention among promising 2-year-olds at this time year is testing them around two turns, sprinters are still a highly desirable commodity. In Sunday’s Bob Hope Stakes, a race named for the legendary comedian, it will be no laughing matter when seven speedy juveniles square off in a seven-furlong contest that may or not be a springboard to two-turn success.

1. Hard to Figure (3-1 morning-line odds): He isn’t really. He has plenty of speed and took a big step forward winning a Los Alamitos stakes for Bob Baffert as a maiden. Could be tough to catch from the rail.

2. Havnameltdown (6-5): Hopefully, he doesn’t live up to his name. Looks like the best of Baffert’s three starters with a second to Cave Rock in the Grade 1 Runhappy Del Mar Futurity and a Grade 3 win before that. Could work out a nice trip outside of Hard to Figure.

3. Lloyds Logic (12-1): He’ll get tested for class in his first start since moving to Jerry Hollendorfer’s barn. Won easily in his last two tries at Emerald Downs, but this is a much tougher spot.

4. Giver Not a Taker (SCRATCHED)

5. Mixto (12-1): He’s still maiden after three tries, with a third his best showing. Can sneak into the picture if the pace gets zany.

6. Practical Move (5-1): Earned a big speed figure in his debut when he was second to Cave Rock, but they have gone downhill since then. Was a winner last time through a disqualification and will need to get back to the effort he showed initially to be a serious threat.

7. Newgate (5-2): The third member of Baffert’s trio, he was shipped to Keeneland to try two turns in the Claiborne Breeders’ Futurity and tired in the stretch. Cuts back to a sprint and should be more competitive.

2022-11-20
Previous Post: WPT and Women in Poker Hall of Fame Gear Up for a December to Remember
Next Post: VGCCC Slaps Poker Machines Operator ALH with Non-Compliance Charges