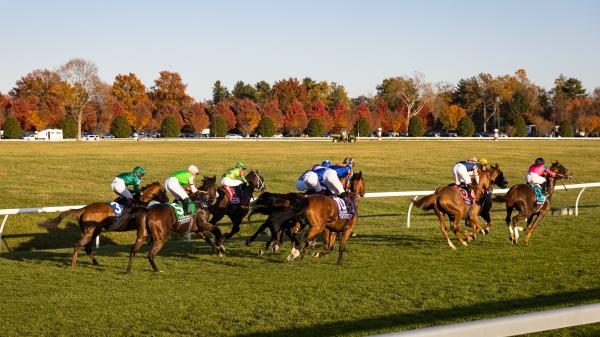 Take a stroll through this roll call of Longines Breeders’ Cup Turf champions, and you will notice a heavy contingent of Europeans. Sporting a grass racing legacy in a league of its own, we can expect another deep router from this group will rise once again out of a well-matched field. What will be the strategy for these Europeans? Could one of them emulate Highland Reel at Santa Anita Park in 2016, when he got loose on the lead and never looked back? What we do know is this year’s edition Saturday at Keeneland Race Course will be another Breeders’ Cup moment to remember.

1. Bye Bye Melvin (15-1 morning-line odds): One of a pair of entries from this barn, the gelding by Uncle Mo finished behind War Like Goddess in the Grade 1 Joe Turf Classic Stakes during the Belmont at the Big A meet. His front-running style could help his chances, but you can expect him to be a big price on Saturday afternoon.

2. War Like Goddess (9-2): The lone female in the race is looking to beat the boys and continue her reign of dominance. Trainer Bill Mott is hoping that she improves upon her effort at the Breeders’ Cup last year at Del Mar when she led in the stretch but ended up finishing third in the Maker’s Mark Filly and Mare Turf. Superstar jockey Joel Rosario helps her chances immensely, especially if he can get her into a forwardly-placed position by the first call.

3. Stone Age (15-1): Despite taking on some top competition in Ireland and England, it looks as though Aidan O’Brien’s colt by Galileo is heading in the wrong direction. He will not be facing Luxembourg or Bay Bridge, who defeated him in recent Group 1 stakes overseas, but this is still going to be a tough task for seasoned rider Ryan Moore.

4. Broome (12-1): The other O’Brien entry has 28 starts to his credit. His victory in the Group 2 Hardwicke Stakes at Royal Ascot back in June is still the highlight of his recent campaign. Still, if you are contesting races like the Group 1 Irish Champion Stakes and the Prix de l’Arc de Triomphe, then you easily have the class to compete against a group like this one. And to add to that, he finished second in this race last year at Del Mar.

5. Rebel’s Romance (3-1): Making the transition from dirt to turf after so much success in Dubai for trainer Charlie Appleby was not easy. After being based there, this Godolphin homebred by Dubawi shipped to England and Germany to prep for the Breeders’ Cup. He aced those tests and comes to Kentucky boasting four straight wins at a mile and a half, the last two in Group 1 stakes in Germany.

6. Channel Maker (30-1): It would be a challenge to name a Breeders’ Cup horse with this kind of experience. After 48 starts in his career, the now-8-year-old is an elder statesman that can duel with the best of them. Do not count out his tactical ability, which could be a major asset in a spot like this one.

7. Nations Pride (7-2): Trainer Charlie Appleby has talked about the experience that this horse brings to the table. Another Godolphin homebred, this colt by Teofilo won two of the three “Turf Triple” races in New York this past summer. He did it with a powerful turn of foot that decimated the competition late in the game. He’s a chief rival to stablemate Rebel’s Romance, and Appleby could be going 1-2 Saturday.

8. Master Piece (20-1): He’s a big-priced entry from the barn of Mike McCarthy that ships in from his base in California, and it is hard to see this one fitting in against some talented Europeans. Getting Tyler Gaffalione to ride helps his chances, but his connections are facing an uphill battle for sure.

9. Gold Phoenix (20-1): Trainer Phil D’Amato is the king of California turf racing. Two races back, this son of Belardo was strong in the Grade 2 Del Mar Handicap Presented by the Japan Racing Association. He took the prize, winning by just a head over Master Piece. He is going to need more than a bob to get the job done in a race like this one.

10. Red Knight (20-1): With an impressive 10-for-30 career record (plus eight seconds), it is safe to say that this Trinity Farm homebred loves to compete. A former Bill Mott trainee until he moved to Mike Maker’s barn this year, he won by a nose in the Grade 2 Kentucky Turf Cup at Kentucky Downs in early September. Luis Saez will be doing everything he possibly can to get this veteran ready for a furious stretch run.

11. Mishriff (6-1): One of the most versatile and prolific horses on the global stage has possibly lost a step these past few years. John Gosden is excellent when it comes to game planning, and even though this is a last hurrah, we can celebrate that this $15 million earner will go down as one of the greats.

12. Nautilus (30-1): Paulo Lobo is a Kentucky-based trainer with significant knowledge about the performance of a turf horse. He is bringing this Brazilian runner to the states for the first time in its career. That is a gutsy move, and it certainly helps that a seasoned jockey like Javier Castellano is aboard. A definite longshot …

13. Highland Chief (15-1): The second Graham Motion trainee in this race is a salty runner that staged a major upset in the Grade 1 Man ‘O War Stakes at Belmont Park in mid-May. The son of Gleneagles rated nicely that afternoon and struck the front with authority at the top of the lane. He won in similar fashion last out in the Grade 3 Sycamore Stakes three weeks ago on this Keeneland turf course, but faces a much bigger challenge here.