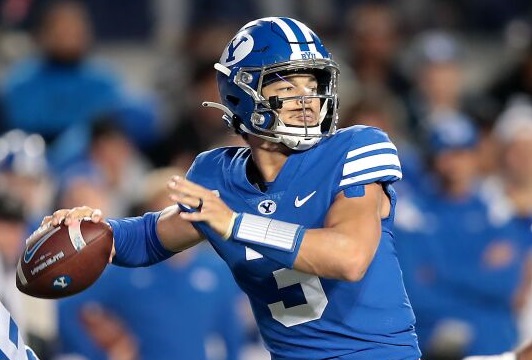 Kalani Sitake is back in his 7th season as BYU’s head football coach. Last season the Cougars went 10-3 overall. Good things are expected from this team again here is 2022. They are ranked #27 in the nation at Athlon sports. This is BYU’s last year as an independent as they have plans to join the Big12 next season.

QB Jaren Hall is back in action this season. He had a solid 2021 campaign throwing for 2500+ yards with 20 TD’s and only 5 INT’s. Look for those numbers to get even better this season. Receivers Puka Nacua and Noah Romney are returning and last season combined for 1400+ yards and 9 scores. Those numbers will increase this season as well.

RB Christopher Brooks transfers in from Cal and brings with him his combined 1,734 yards from his previous three seasons along with his 14 TD’s.

Defensively the Cougars allowed 388 yards and 25 points per game last season. They need to get those numbers lower if they want a chance to run the table. If they can allow >325 yards and >19 PPG there is a real shot at running the table.

September 3rd – @ USF Bulls – USF isn’t a push over but BYU should have no real trouble on their hands here. BYU is -12 points at college football spreads (SBAodds.com) and they should win and cover this line.

September 10th – vs Baylor Bears – This one will be a real solid football game. Its either team’s game to win. I say take the underdog + points regardless of who it is.

September 17th – @ Oregon Ducks – A tough game immediately after playing Baylor. The Ducks may be too much to handle in Eugene. But if BYU somehow is getting a TD or more, take the Cougars.

September 24th – vs Wyoming Cowboys – Wyoming is a team capable of beating mid-majors and putting together a decent record but they should lose this game by at least two TD’s.

September 29th – vs Utah State Aggies – Utah State is built on speed. Unfortunately for them BYU has speed of their own plus better size and more depth. BYU with the convincing win.

October 8th – vs Notre Dame Fighting Irish (neutral site in Las Vegas) – ND will be a tough opponent but we actually see the Cougars getting this win straight up. If they are underdogs then bet them on the ML.

October 15th – vs Arkansas Razorbacks  – This one is tough and if it were in Arkansas I would say the Razorbacks win it. But in Utah we like BYU to win.

October 22nd – @ Liberty Flames – The Flames of Liberty have been building something special. But their star QB from last year Malik Willis is in the NFL now. BYU should cruise to a win.

October 28th – vs East Carolina Pirates – This should be no problem for BYU.

November 19th – vs Dixie State Trailblazers – JV game. Pull the starters at halftime and let the backups have some fun.

The BYU Cougars have a great team but team insiders say next year will be the pinnacle of what they have built. Its just in time too. If they win the Big 12 in 2023, even with a loss on their record, they get into to the college football playoff. That is not the case as an independent in 2022.

Their total win over under is currently set at 8.5 by the sportsbooks. We like them to only lose one or two games so the OVER is the play,

National title odds are set at +50000 at BetOnline.ag – an number we think is underpriced. There is definitely value betting this number.