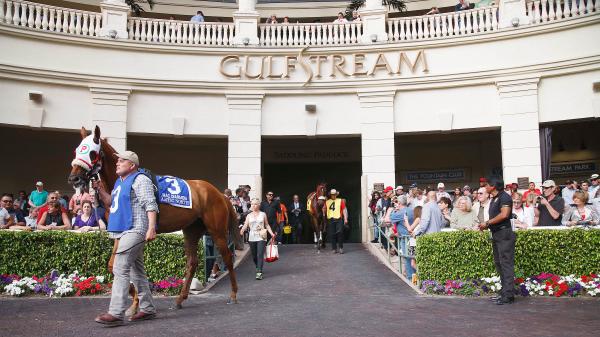 2022 Fountain of Youth Stakes at a Glance

Another spot in the Kentucky Derby Presented by Woodford Reserve will be filled Saturday when a full field of 12 3-year-olds clash in the $400,000, Grade 2 Fasig-Tipton Fountain of Youth Stakes at Gulfstream Park. The winner will earn 50 qualifying points toward the run for the roses, which will assure him of one of the 20 spots in the starting gate. Even the runner-up, who earns 20 points, will be in good shape since points on the Road to the Kentucky Derby accrued by Bob Baffert-trained horses are being vacated. That means the cutoff point for this year’s first leg of the Triple Crown could be lower than usual. In any event, with 12 starters the Fountain of Youth should provide a nice bit of value for handicappers fortunate enough to figure out the top finishers.

1. Markhamian (20-1 morning-line odds): He ships in from Tampa Bay Downs after winning the seven-furlong Pasco Stakes. He’s never been around two turns but speed and an inside post are assets over this track and he has both of them. Hard to picture him winning, but maybe he can hang on and figure in the superfecta at a big price.

2. Simplification (5-2): Would not leave him out of your exotics from this inside post. He’s turned in strong efforts both on the lead and coming off the pace, which means jockey Jose Ortiz will have some options with him. He was second in the Holy Bull Stakes at this distance, and two stellar speed figures over the track label him as a top contender.

3. Howling Time (15-1): He started his career auspiciously enough with a pair of wins, then closed out his juvenile campaign with a tiring fifth in the Kentucky Jockey Club Stakes. He doesn’t seem to be a frontrunner, so perhaps a return to his closing tactics might work out better for him. He’s working out swiftly for his 3-year-old debut and merits some consideration.

4. In Due Time (6-1): He stepped up with a really big allowance win last time out. If he can duplicate that effort, he’ll be a force here. But there’s also a chance he might bounce off it and regress a little bit.

5. Dean Delivers (15-1): He was second in the Claiborne Farm Swale Stakes at seven furlongs last out and in fact has finished second in his prior three starts. He’ll be part of the early pace scenario, but he may not want to go this long.

6. Rattle N Roll (8-1): His Claiborne Breeders’ Futurity win stamped him as a top 2-year-old but then he missed the Breeders’ Cup. He’s trying to play catch up here after not racing since early October. He’s surely a threat, but some of McPeek’s other 3-year-olds have run like they needed a race when they’ve debuted so far this winter, and he may follow suit.

7. A. P.’s Secret (15-1): He’s on the upswing but will be tested for class while making his stakes debut. He seems a notch slower than the top contenders and would need to take a step forward to upend this field. That could happen, but others seem more capable in this spot.

8. Emmanuel (3-1): He’s coming off a win at Tampa, which is a path Hall of Fame trainer Todd Pletcher has used before with some of his best 3-year-olds, such as 2017 Kentucky Derby winner Always Dreaming. This will be an acid test for Emmanuel but he seems to have the right combination of speed and stamina to be a main threat in this field. Would expect nothing short of a big effort out of him.

9. High Oak (8-1): He exploded on the scene with a smashing win in the Saratoga Special Stakes Presented by Miller Lite last summer but then finished fourth on a wet track in the Hopeful Stakes and headed to the sidelines with an ankle problem. If he can serve up an encore of his effort in his stakes win at the Spa, he will be very tough to beat. And, let’s face it, this Triple Crown can surely use Bill Mott with a top candidate.

10. Giant Game (15-1): After a third in the TVG Breeders’ Cup Juvenile Presented by Thoroughbred Aftercare Alliance, he was viewed as a promising Triple Crown prospect. That failed to happen when he lost his 3-year-old debut in the Holy Bull by 24 lengths. He should improve off that weak try but an outside post and a short stretch figure to work against him.

11. O Captain (30-1): He was a closing third in the Limehouse Stakes and may want more distance than the six furlongs of that race. Yet he will need a vastly improved effort and great trip to create much of a ripple in this field.

13. Galt (15-1): He has the pedigree to be a sentimental choice as the little full brother to the champion filly Songbird. He showed early speed in the Holy Bull when he was fourth and that’s not really his game. Unfortunately from this post, he will need to break quickly and be forwardly placed early. At least he has the right jockey in Eclipse Award winner Joel Rosario to work out a good trip. Maybe he’ll become Mott’s main Derby hopeful.