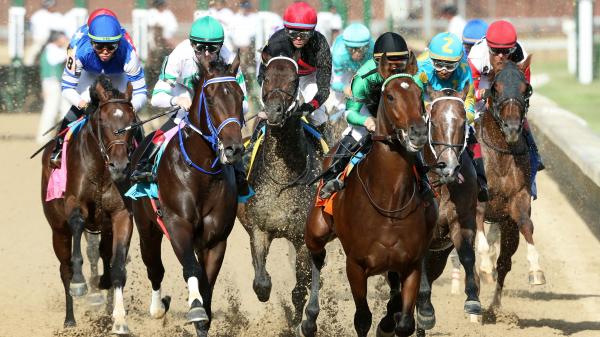 2022 Iroquois Stakes at a Glance

If you believe there’s a sense of fall this weekend at Churchill Downs, sorry. It’s actually spring in the air. The Road to the 2023 Kentucky Derby Presented by Woodford Reserve officially opens for business Saturday with the Iroquois Stakes, the first points race toward a start in the May 6 Run for the Roses. In a change from last year, the points structure has been expanded so that the top five finishers Saturday will receive points on a 10-4-3-2-1 basis. Also, the Grade 3 Iroquois is part of the Breeders’ Cup Dirt Dozen and will award the connections of the top three finishers money toward their starting fees for the TVG Breeders’ Cup Juvenile. The winner will get $15,000 with $15,000 for second and $7,500 for third.

1. Hayes Strike (12-1): He took a big step forward in his second start. After losing by 23 lengths in his debut, he scored by 4 ½ lengths next time out. Still, the speed figure for that win was bland and we’ll focus on others for a winner.

2. Zaici (30-1): His first try in a stakes was a 20-length loss, so we’ll pass on him, even though he’s now being handled by the trainer of Un Ojo, who has been known to win a stakes at a big price.

3. Damon’s Mound (5-2): He won his debut over this track by 12 ½ lengths, then showed it was no fluke by shipping to New York and taking the Saratoga Special Stakes. He’s bred to handle a distance and his speed figures sprinting are promising enough to make him one to watch.

4. Jin Tong (15-1): Ships in from Del Mar after losing by nearly 12 lengths in the Best Pal Stakes. The added distance should help him, but its unlikely to help him enough to make him a factor here.

5. Curly Jack (5-1): He missed by a head in the Juvenile Stakes at Ellis Park in a game effort. That was a nice improvement over a fifth in the Sanford Stakes at Saratoga and continued improvement will make him a big threat.

6. Jace’s Road (7-2): He looked genuine in winning his debut by 6 ¼ lengths and has worked out quickly since then. He will get tested for class here but he certainly can’t be ignored, even with just that one start under his belt.

7. Honed (12-1): Like Jace’s Road, he has started once and captured an Ellis Park maiden race. But his win came in a race moved off the turf course, raising questions about the competition he beat that day.

8. Confidence Game (12-1): Looked good breaking his maiden at Churchill Downs by five lengths. The time didn’t equate into a great speed figure but visually his last effort looked good enough to make him a threat here.

9. Echo Again (2-1): He was a dynamo in his debut, winning by nearly seven lengths at Saratoga with a huge speed figure. The way his connections (Winchell Thoroughbreds and trainer Steve Asmussen) are turning out one good horse after another, it’s understandable why he’s favored. The only concern might be the outside post and the fear of a wide trip and ground loss in just his second start.