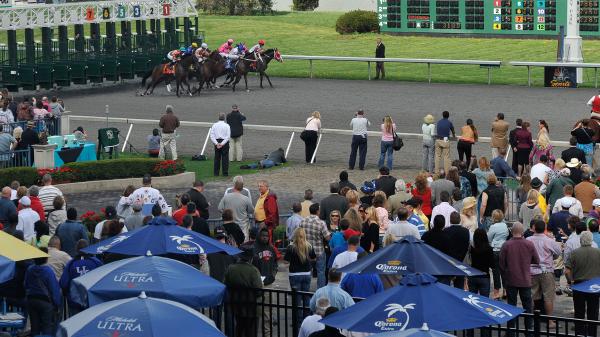 The Jeff Ruby Steaks offers 170 qualifying points for the Kentucky Derby Presented by Woodford Reserve like most prep races at this time of year, but there’s a hitch. The Jeff Ruby will contested on a synthetic, all-weather surface, so even if the winner and runner-up move on to the run for the roses, there will be question marks about their ability to handle a dirt track.

Of course, let’s not forget Animal Kingdom won this race in 2011 (when it was the Spiral Stakes) and the Kentucky Derby. Oh, and yes, it’s Steaks as the race is sponsored by the popular restaurant chain.

1. Royal Spirit (10-1 morning-line odds): He hasn’t raced on an all-weather track, but he’s a graded stakes-placed runner on turf and often that bodes well for a smooth switch to a synthetic surface. He has speed and the rail and is trained by Todd Pletcher, making him one to watch.

2. Stolen Base (7-2): He was a strong second by a neck in the John Battaglia Memorial Stakes, the local prep race for this race. That promising debut on synthetics and solid form on turf paint him as a main threat.

3. Cabo Spirit (12-1): He’s making his debut on synthetics and was a stakes winner on turf at Santa Anita. That turf form is interesting, but he’ll need to perk up after losses by a combined margin 35 ¼ lengths on dirt in his last two races against the top West Coast Kentucky Derby hopefuls.

4. Rich Strike (20-1): He rallied from 11th to finish fourth in the Battaglia. The added distance will help but he’ll need to step up his game a bit as his lone win came in a maiden claiming race.

5. Tawny Port (6-1): He’s an intriguing possibility. He won his first two starts at Turfway for two-time Eclipse Award-winning trainer Brad Cox and then tried dirt in the Risen Star Stakes Presented by Lamarque Ford and was fifth while earning a career-best speed figure. That experience over this track could come handy and make him a threat in the final furlong.

6. Great Escape (15-1): He’s a tough read since he’s making his debut on synthetics without the benefit of a turf race. He has some ability but there are too many unknowns to get excited about his chances.

7. Tiz the Bomb (2-1): Second in the Breeders’ Cup Juvenile Turf, he made a smooth transition to synthetics, winning the John Battaglia Memorial. His late kick should be equally effective at this distance and he looks like the one to beat

8. Red Run (6-1): He’s coming off a stakes win on turf to make his debut on a synthetic surface. He comes from top connections and has a solid pedigree. It would not be shocking if he turns in a big effort.

9. Dowagiac Chief (8-1): Another turf stakes winner trying his luck on synthetics. He has a nice turn of speed and that could come in handy here from an outside post. If he can handle the surface change, he’ll be a threat based on his recent turf efforts.

10. Optigogo (30-1): He started his career on all-weather surfaces with a win and a third. He was shipped cross-country for a turf stakes at Santa Anita in February and flopped while finishing ninth. There’s not a whole lot to get excited about here.

11. Constitutionlawyer (50-1): No turf or synthetic experience and a 42-length loss in a stakes and a fast maiden win on dirt in his last two starts. Given that he’s been no better than third in his three starts besides the maiden win, it looks like an uphill climb for him.

12. Blackadder (15-1): He’s making his first start since leaving Bob Baffert’s barn and being sent to trainer Rodolphe Brisset. He coming off a win in the El Camino Real Derby on an all-weather surface at this distance. An encore of that performance will make him a major player here.

13. Swing Shift (15-1): Makes his first start on synthetics after a third on dirt in a Gulfstream Park allowance race, but he’s on the also-eligible list and will need a scratch in order to run.

THE PICK: Tiz the Bomb