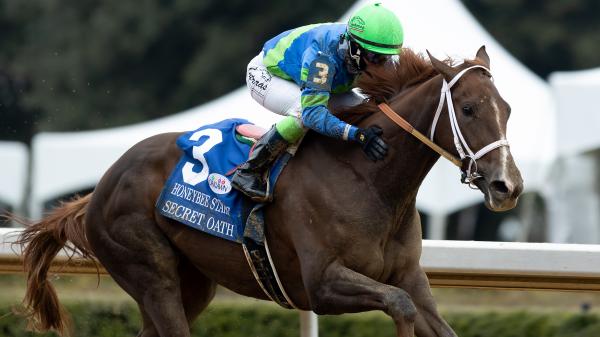 Welcome to 2022 Kentucky Oaks Prospect Snapshots, where periodically we’ll profile a contender for the May 6 Longines Kentucky Oaks at Churchill Downs, the female equivalent of the Kentucky Derby Presented by Woodford Reserve. Over the last several weeks, some of the country’s best 3-year-old fillies have earned qualifying points in stakes races all over the country, and the top contenders have begun to emerge.

This week, we’ll take a look at Secret Oath, who won the Grade 3 Honeybee Stakes at Oaklawn Park on Feb. 26. She earned 50 qualifying points towards the Oaks with that win and has inspired racing fans to imagine big things for her.

Racing Résumé: Secret Oath has won four times from six starts lifetime through February, with earnings of $465,167. She broke her maiden in her second career start on Oct. 31, 2021 at Churchill Downs. She rated off the early pace that day and drew off to win a 1 1/16-mile maiden special weight race by 5 ½ lengths. In her next start, she was fifth in the Grade 2 Golden Rod Stakes at Churchill on Nov. 27.

Following that race, Secret Oath shipped to Oaklawn Park, in Hot Springs, Ark., and since then has been unbeatable. She first made waves on New Year’s Eve, when she won a one-mile allowance race by 8 ½ lengths. A few weeks later, she made her 3-year-old debut in the 1 1/16-mile Martha Washington Stakes on Jan. 29, and was the overwhelming 1-2 favorite. She once again blew the field away, winning by 7 ¼ lengths after rating off the early pace.

In the 1 1/16-mile Honeybee, the chestnut filly was once again a huge favorite. She went off at 3-10 in the six-horse field. She saved ground all the way, only briefly moving off the rail to avoid a tiring rival. As the field neared the quarter-pole, a hole opened up on the inside and jockey Luis Contreras moved his filly through it. Once she was clear, Secret Oath powered away to win by 7 ½ lengths in another dominant performance.

Speed Figures: Secret Oath’s recent figures are very impressive. In her allowance win on New Year’s Eve, she earned a 93 Beyer Speed Figure and a 99 Equibase Speed Figure. In the Martha Washington she declined a bit, but still ran a big number, earning an 88 on the Beyer scale and 94 Equibase mark. Her Honeybee figures attracted the most attention so far. She ran a 92 Beyer and a 100 Equibase figure, both of which are significantly higher than the figures earned by Un Ojo in the Rebel Stakes later that day (84 and 91, respectively). They’re also notably faster than the figures earned by Turnerloose, who won another Oaks prep, the Rachel Alexandra Stakes Presented by Fasig-Tipton, last week (81 and 84, respectively). Secret Oath’s latest figures have vaulted her to the forefront of the Oaks conversation.

Running Style: Secret Oath usually rates just off the early leaders. In the Honeybee, she was fourth, two lengths off the leader, after a half-mile. She was in a similar spot in the Martha Washington, drafting three lengths from the front after a half-mile. From there, Secret Oath pounces on the leaders as they round the final turn. Her high cruising speed coupled with a powerful closing kick makes her a very formidable opponent.

Connections: Secret Oath is owned by Robert and Stacy Mitchell’s Briland Farm, who bred her at their farm in Kentucky. The Mitchells got into the horse business in the early 2000s and enjoyed success as breeders early on when the first foal they bred turned out to be multiple stakes-winning sprinter Level Playingfield. Secret Oath is the first graded stakes winner for Briland Farm as owner.

Secret Oath’s trainer, Hall of Famer D. Wayne Lukas, is considered by many as one of the greatest trainers of all time. Lukas, 86, has been training Thoroughbreds for decades and has won more than 4,800 races, including 14 Triple Crown races. Lukas won the Eclipse Award for outstanding trainer four times, and led all North American trainers in earnings every year but one from 1983 to 1997. He’s won the Kentucky Oaks four times, with Blush With Pride in 1982, Lucky Lucky Lucky in 1984, Open Mind in 1989, and Seaside Attraction in 1990. Lukas has started three fillies in the Kentucky Derby, winning it with Winning Colors in 1988. He also sent out Althea in 1984 and Serena’s Song in 1995.

Secret Oath has had three different jockeys in her career but has been ridden by Luis Contreras in her last three starts. He’s one of the top jockeys at Woodbine near Toronto, Canada, and is currently tied for tenth place in the Oaklawn rider standings with 12 wins at the meet.

Pedigree Notes: Secret Oath’s sire (father) is the late Arrogate, who won the Breeders’ Cup Classic in 2016 and the inaugural Pegasus World Cup in 2017. She’s part of his first crop and so far is the most successful of his offspring.

Secret Oath’s dam (mother), Absinthe Minded, by Quiet American, also raced for Briland Farm and Lukas. Absinthe Minded was a three-time stakes winner in her career, with earnings of more than $640,000. Five of her six career wins came at Oaklawn, and she’s clearly passed along her affinity of the track to her daughter. Absinthe Minded did her best racing at 1 1/16 miles, winning three listed stakes at that distance (all at Oaklawn) and running only two lengths behind 2011 Horse of the Year Havre de Grace in the Grade 1 Apple Blossom Handicap at Oaklawn. She also finished second in the 2012 Apple Blossom behind Plum Pretty.

Oaks Potential: There’s no doubt that Secret Oath is a top Oaks contender right now. She’s been dominant so far at Oaklawn, and there’s no reason to believe she’ll slow down any time soon. The rest of the 3-year-old filly crop would have to seriously improve to contend with her.

Secret Oath’s dominance has inspired speculation as to if she’ll race against the boys in her next start. With a spot in the Oaks already locked up, she can take a shot at earning some Derby qualifying points in a Derby prep next out and give her connections an option. Comments made by Lukas the day after the Honeybee indicated that he’s leaning towards sticking with the fillies and racing her in the Fantasy Stakes at Oaklawn on April 2. However, he did not close the door on running in a Derby prep, potentially the Arkansas Derby on the same day. Regardless of where it is, Secret Oath’s next race will certainly be appointment viewing.