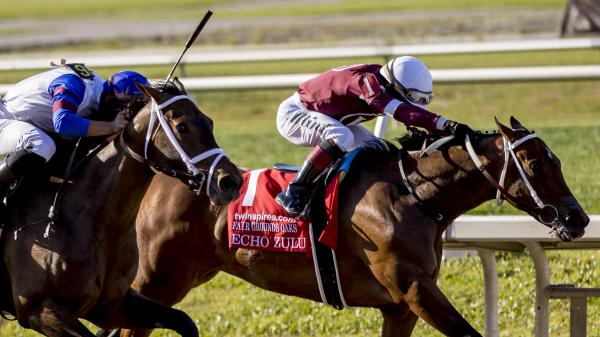 Welcome to 2022 Kentucky Oaks Hopeful Snapshots, where we’ll take a look at a contender for the May 6 Longines Kentucky Oaks, the female equivalent of the Kentucky Derby Presented by Woodford Reserve. With just a few weeks to go until the big race, a clear picture of the major contenders has begun to emerge.

This week, we’ll take a look at last year’s champion 2-year-old filly, Echo Zulu, who won the Grade 2 Twinspires.com Fair Grounds Oaks last Saturday in her 3-year-old debut. She locked up a spot in the Kentucky Oaks with 100 qualifying points, and will almost certainly be one of the favorites on the first Friday in May.

Racing Resume: Echo Zulu could not have been more impressive as a 2-year-old. She made her debut on opening day of the 2021 Saratoga meet in a 5 ½-furlong maiden special weight race. She pressed the pace and drew off to a 5 ½-length win. On closing weekend of the season, she went off as the odds-on favorite in the $300,000 Spinaway Stakes and won by 4 ½ lengths.

For her final prep before the $2 million NetJets Breeders’ Cup Juvenile Fillies, Echo Zulu entered the $400,000 Frizette Stakes at Belmont Park on Oct. 3. As the overwhelming 0.35-1 favorite, she set the early pace and won by seven lengths, running a mile in an impressive 1:35.12 for her second Grade 1 win.

In the Breeders’ Cup Juvenile Fillies, Echo Zulu scared off all but five fillies and was once again a heavy favorite. Just like in the Frizette, she went to the lead early and was never in serious danger of being caught. She crossed the finish line 5 ¼ lengths in front. On the strength of her impressive season, she won the Eclipse Award as champion 2-year-old filly with 233 first-place votes from 235 ballots cast.

After a few months on the sidelines, Echo Zulu returned to the races in the Grade 2 Twinspires.com Fair Grounds Oaks on Mar. 26. Despite the long layoff, she went off as the 1-10 favorite in the field of six. As usual, she set the early pace, but this time the bay filly faced a strong challenge in the stretch in the form of Hidden Connection. The two fillies dueled down the Fair Grounds stretch but Echo Zulu ultimately prevailed by a nose to improve to 5-for-5 lifetime.

Speed Figures: Echo Zulu ran some impressive Beyer Speed Figures in her 2-year-old season. She ran a 90 in both the Spinaway and the Frizette, then earned a 94 in the Breeders’ Cup Juvenile Fillies. In the Fair Grounds Oaks, she declined a bit to an 88, a few points lower than a 92 earned by the country’s other top 3-year-old filly, Secret Oath, in the Honeybee Stakes. However, Echo Zulu hadn’t raced for a few months before the Fair Grounds Oaks, and as such might not have been at her peak ability. She should improve with a race under her belt.

On the Equibase scale, Echo Zulu improved with each start in her 2-year-old season. She ran a 92 in the Spinaway, a 97 in the Frizette, and a 99 in the Breeders’ Cup Juvenile Fillies. She earned a 95 in the Fair Grounds Oaks.

Running Style: Echo Zulu’s biggest asset is her early speed. She tends to go to the front and dare the rest of the field to catch her. She hasn’t trailed at any point of call since her maiden race, when she was second by a half-length after the first quarter-mile and the first half-mile before taking the lead and drawing away. She’s proven to be very difficult to catch when racing on the lead.

Echo Zulu’s Hall of Fame trainer, Steve Asmussen, has a long association with the Winchells. He became the all-time winningest North American trainer last year. He’s had a great season so far this year as well, topping the national trainer standings with 106 wins as of March 28.

Echo Zulu was ridden by one of Asmussen’s regular riders, Ricardo Santana Jr., for her first three races. Before the Breeders’ Cup Juvenile Fillies, Asmussen made a rider switch to Joel Rosario, and the 2021 Eclipse Award winner has ridden her in each of her last two starts.

Pedigree Notes: As noted above, Echo Zulu’s sire is Gun Runner, the 2017 Horse of the Year. In his Horse of the Year campaign, Gun Runner won five graded stakes races, including the Breeders’ Cup Classic. He capped off his career with a victory in the 2018 Pegasus World Cup Invitational.

Oaks Potential: So far, it’s hard to knock anything about Echo Zulu. She has a perfect record and dominant early speed that will make her tough to catch on the first Friday in May. She wasn’t as impressive in the Fair Grounds Oaks as she was in any of her starts as a 2-year-old. However, she hadn’t raced in more than four months prior to that race and she showed a lot of heart holding off Hidden Connection in the stretch.

The biggest factor for Echo Zulu’s Oaks chances may be if Secret Oath is in the race or not. Off her victory in the Honeybee Stakes, she was entered against males in the Arkansas Derby at Oaklawn Park on April 2. If she finishes in the top two in that race, she would have enough qualifying points to race in the Kentucky Derby Presented by Woodford Reserve. Should she decide to race in the Derby instead, it would make Echo Zulu’s chances to win the Oaks much higher. Regardless of what Secret Oath does, however, Echo Zulu is a promising filly with lots of potential for a big season.