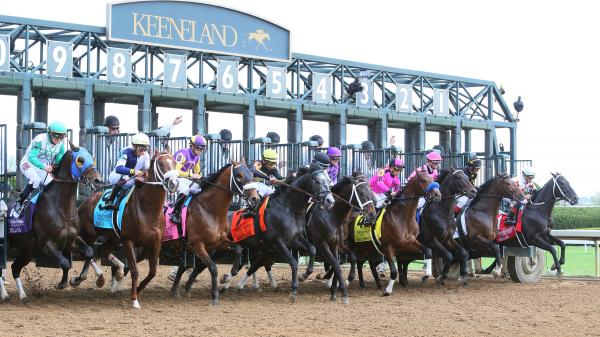 2022 Lexington Stakes at a Glance

The Road to the 2022 Kentucky Derby Presented by Woodford Reserve closes Saturday with one final chance for a 3-year-old to pick up enough qualifying points to crack the field of 20 for the opening leg of the Triple Crown. A total of only 34 points will be up for grabs in the Stonestreet Lexington Stakes but a victory at Keeneland could lift a few of the 11 starters into the starting gate on the first Saturday in May.

1. Midnight Chrome (20-1 morning-line odds): He has only raced twice on dirt, but one of those starts was a third in the Remsen Stakes, when he finished behind top Kentucky Derby candidates Mo Donegal and Zandon. Could be an interesting possibility from the rail.

2. In Due Time (3-1): His second-place finish in the Fasig-Tipton Fountain of Youth Stakes was controversial as the path he followed led to two other runners falling and jockey Paco Lopez getting a 14-day suspension. He’s never been worse than third in four career starts and with a clean trip, he will be hard to beat.

3. We All See It (15-1): Put in a strong effort to win a Fair Grounds allowance race last time out. If he can duplicate that effort, he’ll be a factor here. Yet the time was a noticeable improvement from his previous efforts and he seems destined to bounce.

4. Ethereal Road (10-1): After a good second in the Rebel Stakes, he flopped last weekend in the Toyota Blue Grass Stakes over this track. In most cases, he would be a tossout, but with a legendary trainer such as D. Wayne Lukas, the short rest may not be an insurmountable obstacle.

5. Howling Time (15-1): He was badly beaten while making his 3-year-old debut in the Fountain of Youth and should face a steep uphill climb here as well.

6. Skate to Heaven (30-1): Stepped up with a big effort in his fourth start to finally break his maiden. Continued improvement will put him in the picture here, but others in the field are more appealing.

7. Major General (4-1): Showed little in the Lambholm South Tampa Bay Derby when he made his 3-year-old debut, finishing 10th. That’s not much of an endorsement but he comes from top connections and could rebound here.

8. Strava (20-1): Was third behind Arkansas Derby winner Cyberknife last time and offers some appeal. Hails from a barn that has been known to pull off an upset in a graded stakes.

9. Tawny Port (5-2): He was second in the Jeff Ruby Steaks but that was on a Tapeta synthetic surface. In his lone dirt race he was fifth in the Risen Star Stakes Presented by Lamarque Ford while enduring a tough trip. Though he has enough points at the moment to run in the Kentucky Derby, this should be an acid test for whether or not he belongs in that field.

10. Dash Attack (10-1): He keeps running into some form of issues since a promising debut win. The post does not bode well for his chances, but picking up jockey Flavien Prat should help him stay out of traffic and give him his best chance to turn in a solid effort.

11. Call Me Midnight (6-1): The mystery is whether he’s the horse who beat Epicenter at 28.50-1 odds two starts back in the Lecomte Stakes or the one who was sixth in the Twinspires.com Louisiana Derby at 9.10-1 in his most recent start. Chances are he’ll take a step forward here but the outside post could work against him.

THE PICK: In Due Time