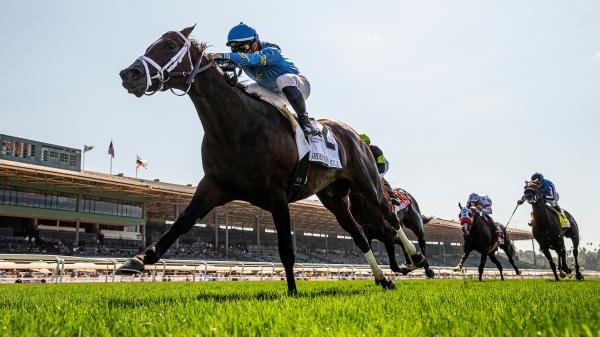 2022 Shoemaker Mile Cheat Sheet: Get to Know the Horses

The Road to the 2022 Breeders’ Cup World Championships kicks off Monday, May 30, at Santa Anita Park with the $500,000, Grade 1 Shoemaker Mile Stakes at Santa Anita Park. While several “Win and You’re In” races for the 39th Breeders’ Cup have already been held overseas, the Shoemaker on Memorial Day is the first domestic qualifier, and it offers the race winner an automatic berth to the FanDuel Breeders’ Cup Mile Presented by PDJF Nov. 5 at Keeneland. (View the entire Challenge Series schedule here.)

The Shoemaker Mile, first run in 1938, was called either the Premiere Handicap or Hollywood Premier Handicap until 1990, when it was named to honor Hall of Fame jockey and 20th-century sports icon Bill Shoemaker. It transferred from the now-razed Hollywood Park to Santa Anita Park in 2014.

Get up to $100 in Bonus Cash when you sign up and bet the Shoemaker Mile with 1/ST BET! Visit 1st.com/bet/cheatsheet and use promo code 100ABR to get started. Once you have signed up and start betting, you’ll start earning your $100 Sign Up Bonus. That way, once you get to know the horses in this handy Cheat Sheet, you can stop by 1st.com/bet/cheatsheet and place your bets on Monday, May 30. Plus, you can take advantage of 1/ST BET’s other promotions at 1st.com/bet/promotions. So no matter what horse you pick, your best bet is with 1/ST BET.

Notable achievements and interesting facts: Masteroffoxhounds has been a regular presence on the Southern California turf circuit since moving to the U.S. from Ireland back in fall 2020. He’s got one graded stakes win to his credit – a 1 ¼-length score in the Grade 2 San Marcos Stakes at Santa Anita in February 2021 – and appears to be rounding back into his best form so far this year. He made his first start since last August on March 25, and lost the lead late to finish a half-length back in a one-mile allowance-optional claiming race. He then finished second again at Santa Anita, this time to Beyond Brilliant in the Grade 2 Charles Whittingham Stakes on March 25. The son of War Front has mainly competed in races longer than a mile over the past two years – such as the 1 ¼-mile Whittingham – and that’s a negative compared against some other horses in the Shoemaker who are preferred milers. But his current form gives him an outsiders’ chance at the win on Monday. Phil D’Amato has assumed training duties for Masteroffoxhounds after Richard Baltas was banned from entering Santa Anita Park while an investigation into the May 8 stewards’ scratch of one of his horses is ongoing. He joins Count Again and Dance Some Mo as contenders with a chance to give D’Amato a fourth win in the Shoemaker, joining Obviously (2014), Midnight Storm (2016), and Hunt (2018).

Notable achievements and interesting facts: Count Again has compiled an impressive record competing in turf races all around North America over the past three years and is a must-use horse for exactas and trifectas in Monday’s Shoemaker. He ships back to Phil D’Amato’s California base after running sixth (defeated by only 1 ¾ lengths) in a competitive Maker’s Mark Mile Stakes at Keeneland on April 15. Prior to that race, the gelding broke through with a Grade 1 win on Santa Anita’s turf by rallying furiously and edging European import Space Traveller by a head in the Frank E. Kilroe Mile Stakes on March 5. He’s a pure closer and therefore will need some racing luck in a crowded field to find some room in the homestretch in order to unleash his late foot. He’s also done his best racing at this distance through his career and picks up one of the best jockeys in North America to ride in Irad Ortiz Jr. Add it up, and he’s a solid win contender who will probably go off as the second post-time betting choice behind Smooth Like Strait. D’Amato has three wins in the Shoemaker Mile: Obviously (2014), Midnight Storm (2016), and Hunt (2018). He finished second last year with Say the Word.

Notable achievements and interesting facts: Heywoods Beach makes his first start since July 2021 in a very tough spot Monday. He will also be returning to turf after making his final four starts of last year’s campaign on dirt. The son of Speightstown had raced on grass for 11 of his first 12 career starts from 2019-’21 with a couple of wins but was moved to dirt in April 2021, and he went on to win a 1 ¼-mile allowance-optional claiming race at Santa Anita and run third in one of his two stakes tries on the surface before being shelved. Now he’s back to compete on a surface where he’s showed flashes of talent but at a lower level; in his two graded stakes tries on turf, he’s been defeated by a combined 12 ¼ lengths. Add it all up, and Heywoods Beach will be one of the longest shots in the Shoemaker field. Trainer John Sadler won the 2015 Shoemaker with Talco. Jockey Umberto Rispoli won last year’s Shoemaker aboard Smooth Like Strait, but he’s been replaced on the favorite this year by Flavien Prat.

Notable achievements and interesting facts: Dance Some Mo will vie with Heywoods Beach as the longest shot in the Shoemaker field come post time. His only career win came in a 1 1/8-mile maiden race at Churchill Downs more than a year ago, and he finished a nonthreatening 10th of 13 in his only stakes try last summer in the prestigious Queen’s Plate at Woodbine. This Ontario-bred was transferred from Graham Motion to Phil D’Amato after that start and did not return to the track until March when he was eased in a one-mile dirt race. In his next and most recent start, Dance Some Mo showed improvement by checking in fifth of 12 in a 1 1/8-mile allowance-optional claimer on Santa Anita’s turf course. He’ll need to show much more improvement on the order of 10 or so Equibase Speed Figure points to have any chance of hitting the board in the Shoemaker, even against only five opponents. D’Amato is seeking his fourth win in this race; he previously won with Obviously in 2014 (that horse’s second consecutive Shoemaker victory but first for D’Amato), Midnight Storm in 2016, and Hunt in 2018.

Notable achievements and interesting facts: Smooth Like Strait will be a heavy favorite in the Shoemaker Mile and deservedly so. He’s competed against the very best turf horses in all of North America over the past two years, and some of his very best efforts, in fact, have not resulted in victories. Over a six-month span from November 2020 to May 2021, he lost three Grade 1 stakes by margins of a head, neck, and neck again, which preceded a breakthrough win by 1 ½ lengths in the Shoemaker Mile last June. Since then, Smooth Like Strait has actually gone winless through five starts, and in four of them he gave up the lead in the stretch … but the margins have all been very close. Perhaps his best race came in last November’s FanDuel Breeders’ Cup Mile Presented by PDJF at Del Mar, where he set the pace and fought gamely through the stretch before yielding by a half-length to European star Space Blues. In his first 2022 start, Smooth Like Strait shipped to Keeneland and battled with another European invader, Masen, in the stretch of the Grade 1 Maker’s Mark Mile Stakes on April 15 before settling for third as Shirl’s Speight ran by the pair right before the finish. That field also included Shoemaker contender Count Again, who finished sixth, and overall is a stronger bunch than the group Smooth Like Strait will face Monday. Look for him to head straight to the front of the field, and jockey Flavien Prat (who replaces Umberto Rispoli after that rider had been on Smooth Like Strait for 11 starts in a row) will need to be judicious in determining the early fractions in order to leave enough stamina in reserve to secure a second straight Shoemaker Mile win for this horse and his owner and trainer. Prat recently moved from the southern California circuit to New York but returns for the Memorial Day racecard. He won the 2017 Shoemaker Mile aboard Hunt and finished last year on Say the Word.

Pedigree: Hold Me Back – Cupids Revenge, by Red Ransom

Notable achievements and interesting facts: This horse is a true throwback to an earlier era, bringing a lengthy and impressive career record to the Shoemaker Mile. Over 37 prior starts, he’s won eight stakes races and finished second or third in seven more, including a third-place effort behind Smooth Like Strait in last year’s edition. Also last year, he picked up his first and only graded stakes win in the Grade 3 American Stakes at the same course and distance he’ll run at Monday. This year, Restrainedvengence started his 7-year-old campaign with a ninth-place finish in a one-mile stakes race on dirt at Santa Anita but then showed signs of life when shipped up to Golden Gate Fields for the Grade 3 San Francisco Mile Stakes. He checked in eighth of 14 in that race but rallied late and was only 3 ½ lengths behind the winner. If Restrainedvengence can build off of that effort in his third start of 2022, he’s got a shot at spicing up some exotic bet payoffs Monday just as he did in last year’s renewal when he went off at 19.30-1. He adds blinkers for the Shoemaker.