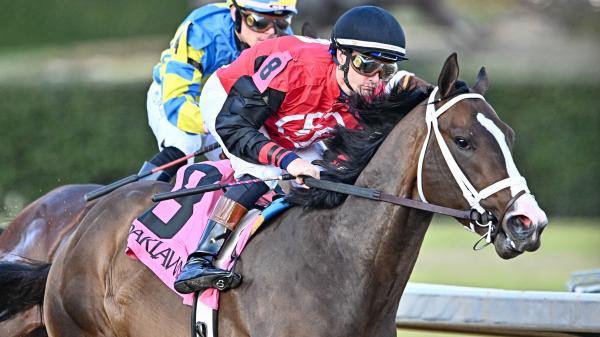 This feature provides a capsule look at three horses who are heating up on the Triple Crown trail and three horses whose chances for the 2023 Kentucky Derby Presented by Woodford Reserve are not quite as strong as they were a few weeks ago.

In the first edition of this blog for the 2023 run for the roses, the focus was setting the bar for the 3-year-old division as the calendar moved into early December. This second edition takes a closer look at what happened near the end of the 2022 calendar year on the Derby trail and some of the early preps in 2023 for the newly minted 3-year-olds.

Look for this column to appear regularly moving forward to analyze to biggest movers approaching the first leg of the Triple Crown. For now, let’s take a look at what has changed over the last month or so on the 2023 Triple Crown trail.

This first spot was really close for me between Victory Formation and my second choice, Verifying, but ultimately, I landed on the 3-year-old who has never crossed the finish line behind another racehorse. There is something about an unbeaten colt that has proved he likes to win, and Victory Formation improved to 3-for-3 with a three-length score in the $250,000 Smarty Jones Stakes Jan. 1 at Oaklawn Park. He has improved both his Equibase Speed Figures (92-96-102) and his Beyer Speed Figures (81-85-91) with each start and was at his most dominant when stretching out for the first time to a mile at Oaklawn in the Smarty Jones. Trainer Brad Cox has emerged as a top trainer for Derby hopefuls in recent years with a DQ win by Mandaloun in the 2021 Kentucky Derby Presented by Woodford Reserve and a victory by Essential Quality in the 2021 Belmont Stakes Presented by NYRA Bets. He said the next target for Victory Formation would most likely be the 1 1/16-mile Rebel Stakes on Feb. 25 at Oaklawn, which would give the bay colt by Tapwrit eight weeks to recover from a career-best performance in what was his stakes debut. Victory Formation did not finish especially fast (final eighth of a mile in 12.93 seconds) and he needs to continue to improve to compete with the elite horses in the division, but at this point he looks like a promising prospect with a solid distance pedigree, as pointed out by Patrick Reed in this profile.

I might be overvaluing an allowance win over an outclassed bunch Jan. 14, 2023, at Oaklawn, but I thought Verifying’s 5 ¼-length win was a terrific return for the bay colt by Justify. He showed promise at 2 when second in the $500,000, Grade 1 Champagne Stakes but his chances were compromised with a lousy start in the FanDuel Breeders’ Cup Juvenile presented by Thoroughbred Aftercare Alliance. His 3-year-old debut was a nice bounce-back effort and with a new career-high 99 Equibase Speed Figure and 97 Beyer Speed Figure, Verifying showed he still might have a significant impact on the 2023 Road to the Kentucky Derby. As mentioned above in the capsule about stablemate Victory Formation, trainer Brad Cox is very capable with a talented 3-year-old – and he has no shortage of them this year – and Verifying has a nice combination of talent and pedigree as a half-brother to 2019 champion older dirt female Midnight Bisou. With a final eighth of a mile in 12:48 seconds on Jan. 14, Verifying also finished notably better than Victory Formation at the same distance, albeit a couple of weeks after the Smarty Jones. I’m intrigued.

Last year, I avoided the Bob Baffert 3-year-olds in this column because they were not eligible to accrue Kentucky Derby qualifying points as part of the trainer’s two-year suspension stemming from Medina Spirit’s medication violation in the 2021 Kentucky Derby. However, last year we saw that owners of legitimate candidates for the run for the roses were willing to transfer quality 3-year-olds in order to make the race, so I am adjusting and including them as well for 2023 even though they will not earn points while under Baffert’s care. In the Grade 3 Sham Stakes Jan. 8 at Santa Anita Park, this Good Magic colt showed impressive grit as he outdueled Spun Intended through brisk quarter-mile fractions early – :22.28 opening quarter-mile and :45.57 half-mile – and then he still had enough fuel in reserve to turn back a bid from stablemate Newgate in deep stretch. Reincarnate finished a neck in front of Newgate, and another stablemate, FanDuel Breeders’ Cup Juvenile presented by Thoroughbred Aftercare Alliance third-place finisher National Treasure, was another three-quarters of a length back in third. I have not been especially impressed thus far with the Southern California Derby hopefuls not named Cave Rock, but I did come away impressed with Reincarnate, who earned a 95 Beyer Speed Figure and career-top 98 Equibase Speed Figure. He is a long-striding colt from the first crop of 2017 champion 2-year-old male Good Magic, the 2018 Kentucky Derby runner-up, and was produced by a stakes-winning Scat Daddy mare who won at distances up to a mile.

Jace’s Road was in contention with Reincarnate for the final spot and what would have been an all Brad Cox top three after a front-running 5 ½-length romp in the Gun Runner Stakes Dec. 26, 2022, at Fair Grounds. The speed figures were promising – a strong 93 Beyer Speed Figure and a career-best 94 Equibase Speed Figure – and his only poor start came on a sloppy track that he did not seem to like in the Grade 3 Street Sense Stakes last fall at Churchill Downs. As Patrick Reed noted in his profile, there are some reasons for optimism as it pertains to distance in Jace’s Road’s pedigree. … Practical Move won the $200,000 Los Alamitos Futurity Dec. 17, 2022, and earned an 88 Beyer Speed Figure for his stakes win, one point off his career-best 89. He is within striking distance of the top Derby hopefuls with time to develop and improve as he gets a planned break from Santa Anita’s early preps, but he’s not fast enough right now. … I view Lugan Knight as an elite talent, as evidenced by his hard-fought win over Arctic Arrogance in the Jerome Stakes Jan. 7 at Aqueduct, but as I mentioned in my recent profile, even owner George Yager has concerns about distance limitations. I’m keeping an eye on him but waiting to see the results as the distances get longer. … Much was made of $3.55-million purchase Hejazi’s front-running maiden win Jan. 15 at Santa Anita that earned a 97 Beyer Speed Figure. His lone try around two turns in the Grade 1 American Pharoah Stakes was not great, however, so let’s pump the breaks until he wins around two turns. Strong pedigree on this one, but I’m skeptical.

Early buzz horses on the Triple Crown trail have gotten more and more support in recent years after Justify won the 2018 Kentucky Derby in just his fourth start and went on to sweep the Triple Crown for Hall of Fame trainer Bob Baffert. That has been especially true for recent Baffert runners and Arabian Lion is a prime example. He was ridiculously bet down to 15-1 odds (co-second choice along with FanDuel Breeders’ Cup Juvenile presented by Thoroughbred Aftercare Alliance winner Forte!) in Caesars Sportsbook odds to win the 2023 Kentucky Derby off of a maiden win and a runner-up finish in an allowance race. He faded badly in his stakes debut Dec. 17, 2022, to run last of five in the $200,000 Los Alamitos Futurity meaning two things: he burned some significant money in Vegas and Justify, he ain’t.

A multiple graded stakes winner on the turf who had trained quite well on the dirt for Jeff Mullins, this Creative Cause colt tried the main track for the second time (the first was a fourth on a sloppy track in his career debut) in the $100,500 Sham Stakes Jan. 8 at Santa Anita Park. He stalked the pace from third in the Sham but had no response when it came time to accelerate and faded to finish fourth, beaten by 24 lengths. It was worth a shot testing Packs a Wahlop on the dirt, but it sure looks like grass is his preferred surface and there are plenty of great races for a talented 3-year-old on turf.

I’ve been fairly high on National Treasure, but blinkers off or blinkers on it just doesn’t seem like he loves to win so far in his career. Most recently, he finished third as the 3-5 favorite behind a pair of much less highly regarded stablemates in the $100,500 Sham Stakes Jan. 8 at Santa Anita Park. He certainly has the ability to compete with elite 3-year-olds, as evidenced by his third-place finish in the FanDuel Breeders’ Cup Juvenile presented by Thoroughbred Aftercare Alliance and runner-up finish to Cave Rock in the Grade 1 American Pharoah Stakes. But he appears to be a cut below the top runners at this point and perhaps needs some more time to figure out what he needs to do to win. Perhaps a confidence booster against allowance competition is in order for this Quality Road colt, a $500,000 yearling purchase who won his debut impressively but has not won in three starts since then for Bob Baffert.