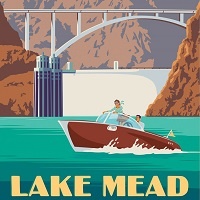 $500 Million Allocated to Save Lake Mead • This Week in Gambling

Lake Mead has never been this low. Not since it was filled in 1934. Now, with the American Southwest in the midst of the worst drought in 12 centuries, the lake sits only about 100 feet from becoming a “dead pool”. Soon, it may not be able to produce electricity or supply water.

Las Vegas depends on the lake not so much for the electricity generated from Hoover Dam, as Nevada only gets about 20% of what’s produced. It’s the water that Sin City is counting on, getting 90% of what they use from the reservoir. The other 10% comes from groundwater and wells… some of which have already run dry.

Lake Mead is now at a point which some are calling “critical low water elevation”. That’s why a $500 million bill just passed in the US Congress. Called the Wildfire Response and Drought Resiliency Act, it sets aside cash for severe climate issues, such as the one unfolding in Nevada.

The water level in Lake Mead has dropped over 160 feet just since 2000. One of the states U.S. Representatives, Susie Lee, addressed the matter by saying “This can’t be overstated — Nevada is facing the worst drought in 12 centuries, and it’s an existential threat to our communities and our future”.

Today, the lake is at just 27% of full capacity, and the Bureau of Reclamation has projected it will fall another 20 feet before the end of this year. So, the lights may stay on in Las Vegas. But if there’s no water, can there really be a city?