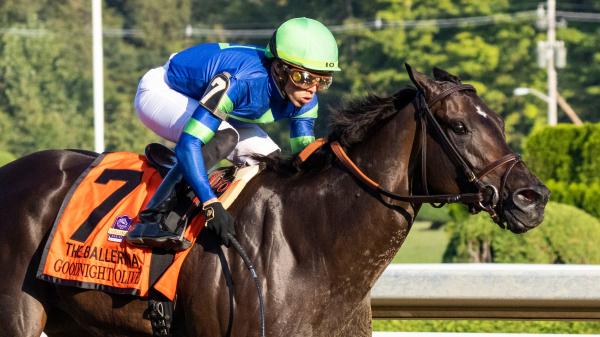 Four-year-old filly Goodnight Olive punched her ticket to the Breeders’ Cup Filly and Mare Sprint and stamped herself a top contender for the race with a sizzling win in the Ballerina Handicap Saturday at Saratoga. She completed seven-eighths of a mile in 1:21.40 for her fifth consecutive win and paid $13.60 to win in a mild surprise.

There are two extended layoffs on her resume that trainer Chad Brown explained were because she needed to have bone chips removed from her ankles. Brown worked as an assistant to Hall of Fame trainer Bobby Frankel when he had Goodnight Olive’s Hall of Fame sire, Ghostzapper, in his stable. Brown sees similarities between his rising star and her brilliant father.

“A lot of stop and go with her, not unlike her dad who I worked with, Ghostzapper,” Brown said. “Maybe not on the track often, but very talented. She’s had some soundness issues, but the team of owners always let me do the right thing, take my time with this horse, and never push her beyond what she was ready to do. She finally got it all together. She’s nice and sound and healthy, and I appreciate their patience.”

Since a runner-up finish in her career debut in March 2021, Goodnight Olive has won five consecutive races by margins ranging from 2 ¾ lengths to nine lengths. Quite simply, she has been dominant. The Ballerina posed a major test of class as the dark bay or brown filly had never run in any stakes race, much less a Grade 1. She aced her first major exam and looks like a serious threat in the Filly and Mare Turf for several reasons:

Goodnight Olive was bred by Stonestreet Thoroughbred Holdings out of multiple graded stakes winner Salty Strike, by Smart Strike. She hails from the family that produced breed-shaping sire Northern Dancer. Brown said Goodnight Olive could race once more before the $1 million Filly and Mare Sprint or perhaps train up to the Nov. 5 race. Either way, she won’t surprise anyone moving forward.