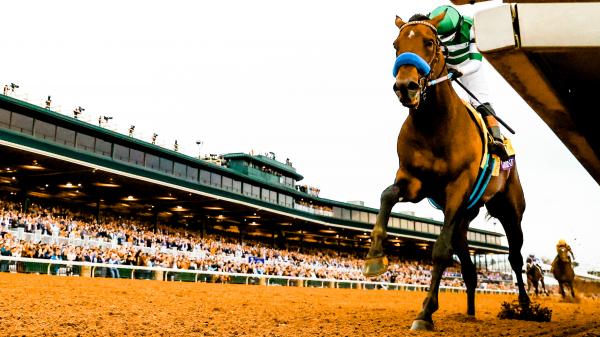 A Year to Remember: Looking Back at the Best Horse Racing Moments of 2022

Superstar Flightline embodied the Thoroughbred at its very best. Rich Strike reminded everyone of racing’s wonderful improbability by coming off the also-eligible list the day before the race to win the Kentucky Derby at 80-1. Cody’s Wish and Tyler’s Tribe provided two incredibly heart-warming tales.

Tom Pedulla looks back at the 10 top stories that made 2022 a year to savor:

ALL-TIME GREAT: Flightline joined the pantheon of the sport’s all-time greats when he dominated the $6 million Longines Breeders’ Cup Classic by 8 ¼ lengths against Olympiad at Keeneland. The winning margin eclipsed the previous mark shared by Triple Crown champion American Pharoah (2015, Keeneland) and Volponi (2002, Arlington Park). Flightline, a 4-year-old son of Tapit, won for the sixth time in as many lifetime starts with those victories coming by a combined 71 lengths. “Brilliant is his normal. He didn’t disappoint,” trainer John Sadler said after Flightline and jockey Flavien Prat turned the Classic into a tour de force.

GOING THE DISTANCE: Flightline’s first test at a mile and a quarter occurred in the Sept. 3 TVG Pacific Classic Stakes at Del Mar. He passed in spectacular fashion, obliterating competition that included five graded-stakes winners by 19 ¼ lengths. Despite being geared down by Prat, he completed the demanding distance in 1:59.28, just 17 hundredths of a second off the stakes and track record Candy Ride set in the 2003 Pacific Classic. “When we went into the final turn, he was traveling so well I asked him to pick it up a little bit,” Prat said. “As soon as I looked back and saw how far in front he was, I wrapped up on him. Obviously, this is the best horse I ever rode.”

STRIKING IT RICH: A horse acquired for a claiming tag is not supposed to go on to win the Kentucky Derby Presented by Woodford Reserve. In fact, no one had done that through the first 147 editions of the Run for the Roses. Rich Strike showed the seemingly impossible is possible when he became the second-longest shot to win the Derby, receiving a masterful ride from journeyman Sonny Leon to reward his few backers at 80.80-1. The son of Keen Ice was a late addition to the field when Ethereal Road was scratched the day before. Trainer Eric Reed had no grandiose thoughts when he claimed Rich Strike for $30,000 in his second career start. “I never dreamed I would be here. I never went to a sale to try to buy a Derby horse,” Reed said. “This was never in my plans.”

RECORD-SETTING SEASON: Irad Ortiz, Jr. added an exclamation point to an outstanding season when he broke the single-season record for stakes victories that the late Hall of Famer Garrett Gomez had set in 2007. Ortiz eclipsed the mark when he rode Dr B to an easy score in the $200,000 Go for Wand Stakes on Dec. 3 at Aqueduct for his 77th graded-stakes triumph. “This is great. Amazing feeling. It’s amazing just to be a part of the story,” Ortiz said. This season also saw him surpass the single-season earnings record of $34,109,019 that he set in 2019. He was helped by three Breeders’ Cup victories – Forte (FanDuel Juvenile Presented by TAA), Goodnight Olive (Filly and Mare Sprint) and Elite Power (Qatar Racing Sprint).

SWEET REDEMPTION: After placing second as the beaten favorite in both the Kentucky Derby and Preakness Stakes, seemingly star-crossed Epicenter rebounded in a big way, dominating the $1.25 million Runhappy Travers Stakes at Saratoga by 5 ¼ lengths against Cyberknife for trainer Steve Asmussen and jockey Joel Rosario. “We walked over with a tremendous amount of confidence but definitely remembering we felt the exact same way walking over for this year’s Derby,” said Asmussen. While Asmussen continues his Derby quest, overpowering Epicenter provided him with his first Travers. He had saddled seven previous starters in the “Mid-Summer Derby.”

WISH COME TRUE: When Cody Dorman visited Godolphin’s Gainsborough Farm in Versailles, Ky., as part of Keeneland’s Make-A-Wish program, he formed an almost immediate and remarkable connection with a foal that was a son of two-time Horse of the Year Curlin. That foal was later named Cody’s Wish after Dorman, who was born with Wolf-Hirschhorn syndrome, a rare genetic disorder that keeps him from speaking or walking. Cody’s Wish, under careful handling by Hall of Fame trainer Bill Mott, emerged as one of the season’s brightest stars. With Cody and his family watching from trackside, Cody’s Wish staged a breathtaking come-from-behind rally to win the Big Ass Fans Breeders’ Cup Dirt Mile at Keeneland. “It’s been incredible,” said Kelly Dorman, Cody’s father. “There is certainly a higher power that has been over this whole thing since it started.”

WONDERFUL LIFE: Life Is Good, while he could not be compared to Flightline, should be appreciated as a very good horse in his own right. He made that point with an emphatic victory under Irad Ortiz Jr. in the Whitney Stakes at Saratoga. The Whitney marked Life Is Good’s eighth victory in 10 career starts and represented his third Grade 1 score. Hall of Fame trainer Todd Pletcher secured his fourth Whitney, tying him with J. Elliott Burch for second all-time, one behind John Gaver. “To me, it’s the premier older horse race in the country outside of the Breeders’ Cup Classic, so it means a lot,” Pletcher said.

TAKES A TRIBE: While Cody Dorman had Cody’s Wish to inspire him during challenging times, 8-year-old Tyler Juhl was helped by Tyler’s Tribe as he received round after round of chemotherapy during a two-year struggle with leukemia. The Iowa-bred, named for Tyler and his devoted social media following, lifted the boy’s spirits as he dominated his first five starts at his home track of Prairie Meadows by a combined 59 ¾ lengths. Although Tyler’s Tribe suffered a bleeding episode during the Breeders’ Cup Juvenile Turf Sprint and had to be vanned off, the bigger picture was overwhelmingly good. Tyler vigorously rang a bell outside Iowa Children’s Hospital to signify that he was free of leukemia on Oct. 24.

MIKE FROM QUEENS: Prominent owner Mike Repole, also known as “Mike from Queens” realized a life-long dream when Mo Donegal and the filly Nest provided him with a one-two finish in the Belmont Stakes Presented by NYRA Bets, a race he yearned to win since he was a teenager. “It’s a 40-year dream,” said Repole, 53. “Coming to this track (Belmont Park) and Aqueduct, being a kid from New York, this is New York’s race.” Repole partnered with Donegal Racing in taking a minority interest in Mo Donegal ahead of the Kentucky Derby. The 1 ½-mile Belmont also carried great significance for Pletcher, who won the “Test of the Champion” for the fourth time. He is tied for fifth on the all-time list.

UNCOMMON STRATEGY: Few owners are willing to skip the Kentucky Derby to take the best possible Preakness Stakes shot. Baltimore native Seth Klarman and trainer Chad Brown were willing to do that, and they believe that made all the difference as lightly-raced Early Voting captured the middle jewel of the Triple Crown. “We wanted to do right by the horse and we’re so glad we waited,” said Klarman after Early Voting fended off Epicenter by 1 ¼ lengths for jockey Jose Ortiz at Pimlico. Early Voting was making only his fourth start in the Preakness. Ortiz agreed with the decision to bypass the Derby, saying of his mount, “I don’t think he was seasoned enough to run in a 20-horse field.”

2022-12-29
Previous Post: Patricio Pitbull vs Kleber Koike Erbst Bellator MMA vs Rizin Odds, Time, and Prediction
Next Post: How Much Did Daniel Negreanu Profit On $4.9 Million In Poker Tournament Cashes?